Four years after the eighth and final season of the HBO series, the cast and key creative crew of the series reunited for this theatrical feature continuation of the series. Producers were no doubt hoping to repeat the success of the Sex and the City movie which also appeared in theaters four years after that successful HBO series ended its televised run. Did they achieve their goals or wind up with something more akin to the much less successful Sex and the City 2? Read on and find out... 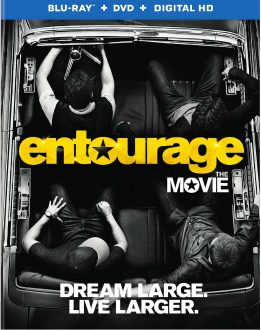 Entourage: the Movie (billed on some promotional materials as just Entourage) reunites movie star Vincent Chase (Grenier), with his crew of pals Eric/"E" (Connolly), Johnny Drama (Dillon), and Turtle (Ferrara) as well as his former Agent turned mega-producer Ari Gold (Piven). The film picks up right where the series left off and quickly resets the characters back to some approximation of where they were during the series' run. Vincent's marriage is dispensed with before the honeymoon is over. Ari's retirement with his family to Italy is over almost as quickly when he makes the move from agent to studio super-producer. Ari reaches out to Vince to star in one of his first big properties, but Vince insists that he also be allowed to direct. Months later Vincent is running over budget and runs afoul of Travis McCredle (Osment), the outspoken son of Larsen McCredle (Thornton), the Texas financier that is bankrolling the film (and a good deal of the rest of the studio's productions). Meanwhile, the somewhat estranged E and Sloan (Chriqui) are awaiting the birth of their child and Turtle is trying to navigate a relationship with Ronda Rousey (as herself) without winding up thrown through a window.

I was not a regular watcher of the Entourage television series, and the film certainly did nothing to encourage me to revisit it. All of the main characters come across as shallow misogynists, with the film tilting more towards celebrating rather than satirizing their Hollywood vapidity. Part of the problem may be that the show just does not feel like a movie. This is underlined by the frequent cameos by actual movie stars who add to the glitzy Hollywood atmosphere while simultaneously striking a contrast with the lesser actors filling out the main cast. On the flip side, the cameos by athletes and non-actor celebrities make the main cast look like total pros.

Jeremy Piven as Ari Gold is the only member of the principle cast who gives a performance that feels like he belongs in a feature film, and even he stumbles over some of the heavy expository scenes early in the film before hitting his stride. Probably the best performance in the film is given by Haley Joel Osment as the nominal antagonist standing in the way of Vincent's movie. He is every bit the scumbag that the main characters are, but he has the advantage of being a scumbag that you are not supposed to find endearing.

The film goes out of its way, almost to a fault, to introduce all of the characters and explain their relationships to each other. While as a relative newb, I appreciated the lifeline, I imagine this could be a bit frustrating for fans more familiar with the series.

The Blu-ray features an AVC encoded presentation letterboxed to the film's original 2.4:1 theatrical aspect ratio that renders the glitzy Hollywood atmosphere with impressive clarity, although the overall cinematic style is a bit flat.

The film's soundtrack is rendered via a lossless DTS HD 5.1 MA track that conveys the unambitious front-focused mix accurately. The surrounds are used sparingly, although the mix does get aggressive for a brief sequence featuring a clip of the "movie within the movie".

When the Blu-ray disc is first played, the viewer is greeted with a promo for "Warner Digital Movies". Proper extras consist of a collection fo featuretets and deleted scenes as detailed below

The Making of "Hyde" (4:34) Adrian Grenier plays Vinnie Chase in a fake behind the scenes look at the "movie within the movie" that is Vinnie's directorial debut. On camera comments are provided by folks claiming to be involved in production of the "Hyde" movie, making it unclear if their attributed jobs are actually their jobs. Based on the on screen title attributions, comments are provided by Grenier in character as Vincent, 2nd Assistant Director Mark Mylod, Executive Producer Wayne Carmona, Makeup Department Head Julie Kristy, Production Designer Chase Harlan, Picture Car Hauler/Driver Chance Robertson, and Creature Designer Neville Page,

Deleted Scenes (19:39) Consists of six scenes that are mostly extensions of scenes appearing in the movie:

Gag Reel (2:46) is the expected collection of on-camera flubs and goofing around captured during the film's production. It includes a few amusing moments, but is not something anyone would want to watch more than once.

Meet the Newest Member of Entourage (2:16) is a short interview featurette from the time of the TV series with young Lucas Ellin (son of Director Doug Ellin) who plays Jonah Gold.
Lucas Ellin Is Jonah Gold (1:59) Includes some more recently captured comments from Lucas reflecting on his role in the movie and attending his first Hollywood premiere

Aside from the additional promoss, the SD DVD Includes the same collection of deleted scenes that appear on the Blu-ray.

Despite an energetic and entertaining performance from Jeremy Piven and a slew of celebrity cameos, Entourage: The Movie is unlikely to win over fans beyond the core audience from the HBO TV series from whence it sprang. Even fans of the original series may be discouraged by the amount of screen time spent on reintroducing characters with which they are already familiar and back-pedaling from where they were left at the series' end. It is presented on Blu-ray disc with solid video, an acceptable but unambitious lossless surround track, and a modest collection of extras including a a gag reel, some extended scenes, and behind the scenes featurettes both real (focusing on the movie) and fake (with actors in character discussing the "movie within the movie"),

Okay, Okay. I left it out of my review, but in response to the question I know you are all wondering about:


No. The movie does not pass the Bechdel test.