The producers of CBS' hit series Elementary seem to have an incessant desire to continually shake up their series. Never content to establish its procedural formula and simply let it run, in each of its three seasons on the air, new elements have been added to stir up its already successful mix of mirth and mystery thus never allowing complacence to set in. The decisions made for season three, however, didn't always work in the show's favor in terms of popularity with its ratings sagging to their lowest-ever level after a late start due to CBS' new commitment to early fall Thursday night football games. While the core Holmes-Watson relationship eventually returned to familiar and ingratiating normalcy which is what made the series so popular from the beginning, the early part of the season going with an abrasive new character to deal with and Holmes and Watson on far more prickly ground did not always work to the show's benefit. Neither did an admittedly competently established but nevertheless unsatisfying season ending episode. 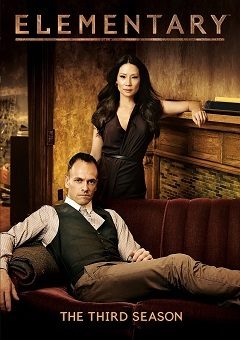 Amaray case with leaves inside a slipcase

Season two ended with Sherlock Holmes’ (Jonny Lee Miller) partner Joan Watson (Lucy Liu) deciding to assert her independence a bit and move out of their New York City brownstone headquarters for a place of her own. In a fit of pique, Holmes pulled up stakes and headed off to London to do consulting work for MI-6. Season three finds Joan now with her own upscale apartment, a new boy friend Andrew Paek (Raza Jaffrey), and a thriving private investigation practice that takes personal cases as well as continuing to consult for the NYPD. Holmes has sneaked back into the Big Apple after having been fired for insubordination by MI-6 and has brought a new protégé with him, Kitty Winter (Ophelia Lovibond). While he has to grovel a bit with Captain Gregson (Aidan Quinn) to be taken on again by the NYPD (and get Joan’s approval of their sharing the caseload), it’s actually Kitty and Joan who begin their working relationship with mistrust and animosity. Over the course of Kitty’s twelve episodes, we do get to know much of her history, and she sheds some of her abrasiveness along the way making her a not uncomfortable addition to the detective team (though she’s often off working on her own cases as she gets more experience leaving Joan and Sherlock to rediscover the chemistry that made them a pretty unbeatable team of investigators), but by the time she leaves, one wonders why the producers bothered to take this twelve-episode detour with her in the first place.

As has always been the case with Elementary, the investigations are unusual and more often than not off the beaten path of other crime procedurals. The writers have also threaded among the episodes this season (as in the past two) allusions to the classic Doyle cases with one case involving “orange pips” (though quite a bit different than the ones in Doyle’s story) and Holmes occasionally calling on his Irregulars for help with investigations. Among the cases this season that were standouts, Holmes pits his deductive reasoning against that of a computer displaying unusual signs of artificial intelligence. A rare orchid provides one of the keys to solving a perplexing murder of a botanist. Holmes and Detective Marcus Bell (Jon Michael Hill) tackle two unusual cases while Watson is otherwise occupied: the search for a pair of missing zebras and later in the season the murder of many thousands of bees. Cryogenics is the focus of one murder investigation, and private federal penitentiaries are central to another couple of deaths. One case this year shows us the murderer from the get-go with the detectives attempting to catch up to our knowledge and then establishing a motive for a series of killings where money is left on the corpses after they’ve been killed. The best episode of the season turns the suspect focus on Holmes himself as the NYPD names him their number one suspect in the murder of a maid which took place during the time when drugs ruled his life, his memories of the time insufficient to clear his own name. This episode introduces us to Holmes’ former pusher Oscar Rankin (Michael Weston), a character who also proves especially important in that controversial season finale.

The surprising events of that season finale perhaps shouldn’t have been so shocking for those who were paying close attention to Holmes all season. Many of the season’s episodes focus on his growing sense of depression and exhaustion over his daily struggles with sobriety, and his allegiance to attending meetings wavers continually throughout the year. The first episode with Oscar Rankin allows the excellent Jonny Lee Miller a chance to really express verbally and physically Sherlock’s shame over his former addiction and his fury that he still can succumb to the lure of drugs with just the right trigger, a trigger that doesn’t seem well established in the season ender unfortunately paired with a case that is the weakest of the season. And, of course, the events of that final episode once again shake up the status quo of the series making the show’s writing staff have to work overtime to reboot the series for a fourth time in the upcoming season. Lucy Liu has moved thoughtfully forward this season first asserting her independence and then realizing that the relationship and environment for doing her work which she previously had was the right one for the out-of-the-ordinary cases the two of them tackle, another roundabout way to arrive back at the starting point for Holmes and Watson.

Here are the twenty-four episodes contained on six discs in this season three DVD set:

The transfers are presented in their widescreen television aspect ratio of 1.78:1 and are anamorphically enhanced for widescreen televisions. At 480p quality, these are mostly outstanding transfers. Sharpness is exceedingly crisp and inviting most of the time with as much detail as can be squeezed from standard definition video. Color is warm and nicely under control throughout with appealing and realistic skin tones. Black levels are rich, and shadow detail is nicely delivered. There are no problems with excessive moiré or aliasing. Each episode has been divided into 6 chapters.

The disc offers both Dolby Digital 5.1 and 2.0 stereo surround sound mixes. Both are effective. For the purposes of this review, the Dolby Digital 5.1 mix was utilized for all but one episode. The score by Sean Callery is the primary inhabitant of the surround channels, and it’s effectively and wittily placed to maximize the series’ mixture of quirky and dramatic moments and sounds rather expansive. Being a dialogue-heavy show, the recording of voices is very professionally done with the dialogue residing in the center channel. Sound effects occasionally do pan through the soundstage or occupy split channels, but with the series being shot in New York City, more of the city’s ambiance should be reflected in the audio mix.

Audio Commentary: Lucy Liu once again provides the commentary on the episode she directed this season “The Female of the Species.” She spends most of the time discussing her choices for camera angles, coverage, and set-ups though there are some behind-the-scenes stories of the cold temperatures they endured shooting the program and lots of praise for the actors in her company.

Watson Style (7:39): actress Lucy Liu speaks about the changes in Joan from season two to season three, changes reflected in her clothes and her new apartment with the series’ costume designer and production designer weighing in on those aspects of the series.

Hello Kitty Winter (7:20): producer Rob Doherty explains why Kitty was brought on board for season three followed by comments on her character by actress Ophelia Lovibond and words of praise from co-stars Jonny Lee Miller and Lucy Liu.

The Elements of Deduction (12:33): Lucy Liu and Jonny Lee Miller praise the show’s writing staff for coming up with the unusual murder cases they enjoy solving each week. Rob Doherty, Craig Sweeny, and Bob Goodman all speak on the difficulties of coming up with the extraordinary kinds of cases worthy of Holmes’ methods.

Bell on the Scene (11:16): actor Jon Michael Hill and producer-director John Polson speak on the memorable puzzles mounted for this year’s episodes.

Not the best season in the show’s history, Elementary still managed to come up with an intriguing and entertaining mixture of murder cases during its third year on the air. While one continues to lament that the series has not been given the luxury of a high definition disc release, these standard definition transfers paired with a good upconverting player make for the next best thing for fans of the show.

I actually thought it was the best season so far.

Being a fan of this series made it strange to watch a very young Jonny Lee Miller (with bleached blonde hair and an American accent) in Hackers.

Todd Erwin said:
Being a fan of this series made it strange to watch a very young Jonny Lee Miller (with bleached blonde hair and an American accent) in Hackers.
Click to expand...

I loved his American accent in Eli Stone, a criminally underrated series that only got a two-season run.
You must log in or register to reply here.