Scandals, whether they be in sports, politics, or the arts, can make for compelling viewing provided one has the proper writer for the script and the correct director for the project. With Eight Men Out, the proper person for both the script and the direction happened to be the same man – John Sayles, and he's turned out one of the best recreations of a sports scandal ever put on film. It's also among the top three or four movies ever produced about America's National Pastime and has lost nothing of its intrigue or power over the almost three decades since it first appeared. 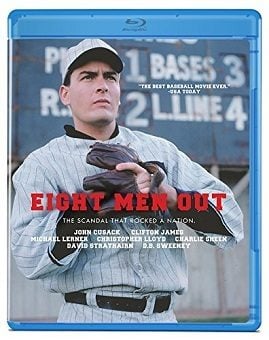 Underpaid and underappreciated by their owner Charles Comiskey (Clifton James), two members of the pennant-winning Chicago White Sox Arnold 'Chick' Gandil (Michael Rooker) and Charles 'Swede' Risberg (Don Harvey) wonder if possibly they couldn’t make more money from the underworld element if they throw the 1919 World Series than they’d get from their owner for winning the world championship. Small-time gangster Bill Burns (Christopher Lloyd) simultaneously gets the same idea and runs it past mid-level mobster Joseph Sullivan (Kevin Tighe) who then goes for bigger bucks himself by taking it to the big boss Arnold Rothstein (Michael Lerner). All agree that six or seven members of the team must be in on the fix which would have to include at least ace pitcher Eddie Cicotte (David Strathairn). Eddie is reluctant to join in until Comiskey welches on a promised $10,000 bonus he needs to assure his daughters can have money for college educations, and so with Eddie taking his money before the first game even begins, Gandil and Risberg bring on board five other players. When the Sox lose the Series to the Cincinnati Reds, a team they should have beaten handily, rumors of a fix become so overwhelming that the league is forced to look into it, appointing independent Judge Kenesaw Landis (John Anderson) as Commissioner of Baseball and bringing eight members of the team up on charges of conspiracy before a grand jury and later to stand trial.

Writer-director John Sayles has done the near impossible making such a thickly populated movie a personal, almost intimate story of sullied reputations and bruised egos. Ironically, despite all the hands in this crooked mess of a conspiracy, very few people come away with anything like the money they were promised, and most ended up worse off than they began even with the scandalous results of the inevitable trial. Sayles has done such a masterful job establishing character, not only among the individual members of the team (who are not a band of brothers despite what outer appearances were trying to get the public to swallow) but also the hackneyed relationships between the hoodlums who seem just as dim-witted and ill-prepared to pull off this fix as the team was itself. The baseball games themselves are masterfully composed and shot with the breezy camerawork of Robert Richardson scooting around through the players as if another member of the team on the field at certain moments and building real tension as the Sox players who weren’t in on the fix (and some who were who begin to understand that the mob isn’t going to come forth with the big paydays they were promised) begin to turn things around coming back from a seemingly hopeless deficit of three lost games in the best of nine series. There is a real period flavor infused throughout the entire film, too, with the old baggy uniforms, mitts, and cleats of days gone by and the antiquated way games were broadcast to the public before the days of transcontinental radio hookups. Made on a $6 million budget, the film has every cent of that money on the screen allowing the viewer to become completely immersed in an era so different from our own that it’s hard to believe it was less than a century ago.

What a tremendous ensemble cast the director has assembled for the film, expert in every way. Among those actors who really stand out: David Strathairn as the pitcher nearing the end of his career and tortured by decisions he’s making that could take him away from the thing he loves best, Gordon Clapp as catcher Ray Schalk, honest to his core and infuriated by any player not living up to his professional best, Michael Rooker as 'Chick' Gandil, a pugnacious player determined to come out of the mess as a winner, John Mahoney as manager William 'Kid' Gleason who believes in his boys first, last, and always, and D.B. Sweeney as Joseph 'Shoeless Joe' Jackson, the illiterate baseball star dragged into the mess innocently and perhaps the biggest name associated with the scandal. But there isn’t a weak performance in the lot from Clifton James’ unctuous team owner willing to spend heavily on sportswriters who will write favorably about his team but not to pay fair wages to the team themselves to Michael Lerner as the ultimate gangster. John Cusack, Charlie Sheen, Jace Alexander, and Bill Irwin also offer winning performances in (moderately to very) important roles as players, and director John Sayles and writer Studs Turkel as writers Ring Lardner and Hugh Fullerton also make solid impressions.

Framed at its theatrical aspect ratio of 1.85:1, this 1080p transfer (AVC codec) looks beautiful. A slight brownish tint suggests the earlier era quite masterfully, but the picture, apart from the softer, somewhat speckled main title sequence, is very sharp and detailed with very good color and accurate skin tones. Black levels are also very good, and contrast has been applied consistently throughout. The movie has been divided into 8 chapters.

The DTS-HD Master Audio 5.1 sound mix doesn’t get much out of the surround channels apart from some slight echoing pans through the soundstage and some crowd reactions during the World Series games. Most of the mix is frontcentric with the dialogue recorded beautifully and mixed well with Mason Daring’s period-appropriate score and the appropriate sound effects. No age-related problems with hiss or crackle are present in the aural presentation.

Audio Commentary: director John Sayles offers a thorough discussion of the making of the movie offering anecdotes and insights into the casting, shooting, editing, and presentation of the film.

Production Featurette (57:54, HD): filmed twenty years after the film’s premiere, writer-director John Sayles looks back on the six weeks of production after years of preparation for making the film abetted by comments from actors D.B. Sweeney, David Strathairn, and Gordon Clapp.

An outstanding period drama of one of the most notorious sports scandals of the twentieth century, Eight Men Out has lost none of its power or entertainment quotient in the nearly three decades since its premiere, and the Blu-ray presentation of the film is fully worthy of the film’s excellence. Highly recommended!

One of my most anticipated titles in a while, Matt! Pre-ordered just after it was announced.


So glad to see those scores and that "highly recommended" tag!

Ordered. Been waiting quite a while for this.
C

Me too. Thanks for the review.

There seems to be a problem for me getting my copy from Amazon. No sign of delivery (let alone shipping).


Anyone else having problems?


Delivery estimate: We need a little more time to provide you with a good estimate. We'll notify you via e-mail as soon as we have an estimated delivery date.
Click to expand...

Mike Frezon said:
There seems to be a problem for me getting my copy from Amazon. No sign of delivery (let alone shipping).

They're showing out of stock which reminds me of the issues with the Paramount/Warner titles like Kiss the Girls and The Man Who Shot Liberty Valance.

I got my shipping notice just now that Amazon has shipped my copy of Eight Men Out and it will be arriving Friday.


Maybe next up could be Cobb (in terms of baseball movies which I could upgrade from DVD)?!?
T

Christ yes, you'd figure the ASC or someplace would underwrite just so Haskell Wexler-shot films all get the best treatment possible. I had read elsewhere of some aspect ratio distortion issue on 8 MEN, so am going to hold off a bit till there is more feedback, but have fingers crossed (haven't seen it since laserdisc.)

One of my favorite movies, finally received my copy yesterday. Quick scan confirms Matt's assessment, best I've ever seen it, miles ahead of the DVD presentation. On a side note, has anyone ever seen a photo of Ring Lardner? The resemblance between him and John Sayles, who plays him in the movie, is UNCANNY. He literally looks like his clone. It is amazing. Another side note, I find that Buck Weaver is the real victim in this tragedy. As depicted in the movie, he was a solid and honest ballplayer who got caught up in the scandal, and suffered the consequences of not blowing the whistle on his teammates.
You must log in or register to reply here.

Saturday at 9:55 AM
noel aguirre