Two comedies that haven't had much respect on video arrive on Blu-ray, Easy Money starring Rodney Dangerfield and Men At Work with Charlie Sheen and Emilio Estevez, courtesy of Shout! Factory. 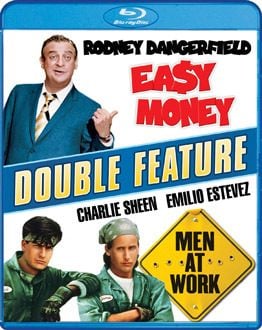 Easy Money: 2.5 out of 5
Monty Capuletti (Rodney Dangerfield) is getting by as a baby and children's parties photographer in suburban New York, making ends meet, supporting his wife, Rose (Candice Azarra), and his two daughters, teenager Belinda (Lili Haydn) and soon-to-be married Allison (Jennifer Jason Leigh). Monty doesn't approve of his future son-in-law Julio (Taylor Negron), much like his mother-in-law Kathleen (Geraldine Fitzgerald) didn't approve of his marrying Rose. What she doesn't approve of is Monty's many vices, such as drinking, smoking, gambling, etc. Monty would rather hang out with his buddies (Joe Pesci, Val Avery, Tom Noonan) at the local pub or strip club than spend time with his family. When Kathleen dies in a plane crash, her will stipulates that Monty's wife will inherit her department store holdings worth $10 million provided Monty can go one year with no alcohol, drugs, gambling, and weigh no more than 175 pounds within the next year. If Monty fails, the estate goes to her assistant Clive (Jeffrey Jones). This may sound like a great vehicle for Dangerfield, but his humor feels restrained throughout much of the film, toned down several degrees from his stand-up routines and even his star-making turn in Caddyshack. The other problem with the film is the screenplay from first-time writers Dangerfield, Michael Endler, P.J. O'Rourke, and Dennis Blair, who apparently never read any of Syd Field's books, waiting until the halfway mark to introduce the main plot device. There are also several subplots that are started but never reach a conclusion. Easy Money isn't a disaster, but it is a slowly plotted and paced comedy, relying in Dangerfield's comic skills that doesn't quite pay off in the end.

Men At Work: 3 out of 5
Carl (Charlie Sheen) and James (Emilio Estevez) are garbage men and roommates that dream of opening a surf shop. Not taking their job seriously, they intentionally make unnecessary noise by tossing and banging garbage cans each morning, much to the annoyance of their boss (Sy Richardson) and a pair of bullying traffic cops (John Putch, Tommy Hinkley). They also have a rivalry of practical jokes with another pair of garbage men (Geoffrey Blake, Cameron Dye). For their actions, their boss assigns his brother-in-law, Louis (Keith David), a Vietnam veteran who’s not quite right in the head. On their route, City Councilman Jack Berger (Darrell Larson) is running for mayor, but has been taking kickbacks from Max Potterdam (John Getz) to look the other way while dumping toxic waste into the ocean. When Berger threatens to blow the whistle on Potterdam, Potterdam hires a pair of thugs (Hawk Wolinski, John Lavachielli) to take him out, but not before Berger hides a taped confession in his assistant Susan’s (Leslie Hope) apartment, which happens to be across the street from Carl and James, who witness the argument and shoot Berger with a pellet gun, but miss the murder. When the boys and Louis find Berger’s body in a trash can the next day, the three panic, further involve Susan (who becomes a love interest for Carl), and find themselves on the run from the two dim-witted hitmen. Men At Work was written and directed by Emilio Estevez, this being his second turn in the director’s chair after the poorly received Wisdom, and as a black comedy, it works, thanks mostly to the on-screen chemistry with his brother, Charlie Sheen. The two provide some funny banter throughout much of the movie, providing most of the laughs. Keith David provides some uneasy laughs as the then-stereotyped Vietnam veteran (“You never touch another man’s fires!”). The film, however, features what is likely John Getz’s worst performance, overacting in every scene he appears in. Many of the seeds of subplots, such as the boy’s dream of owning a surf shop, are dropped very quickly and never pay off, and the ending may be a bit too slapstick for some. That being said, Men At Work has often appeared on my guilty pleasure list.

Easy Money: 3 out of 5
Easy Money is a film that has never looked spectacular on home video, and this new Blu-ray release is no exception. Colors are natural and consistent, with a palette leaning towards greys, giving the film a rather drab look. Detail is good, allowing the viewer to see beads of sweat on Rodney’s brow during several scenes. Grain is left intact, resulting in a nice film-like appearance.

Men At Work: 4 out of 5
Men At Work fares much better than Easy Money, but that may be because the former looks like it was filmed almost entirely under overcast conditions on the East Coast while the latter was filmed along the shorelines of sunny Southern California. Colors are vibrant, natural, and never oversaturated. Estevez also shot his film on a low-grain film stock, resulting in a sharper image overall, especially during the daytime sequences. Contrast holds up fairly well, with decent black levels.

Easy Money: 3.5 out of 5
Although the packaging indicates a DTS-HD Master Audio 2.0 stereo track, Easy Money has the original theatrical mono mix. The track is typical of most early 1980s low-budget comedies, providing clear dialogue with strong sound effects and music, but overall the track is somewhat constrained due to the limitations of the source material, often sounding thin and a bit harsh.

Men At Work: 4 out of 5
Again, the packaging indicates the opposite of what appears on the disc, as Men At Work contains the film’s original matrixed stereo surround track in DTS-HD Master Audio. When played back in Pro-Logic mode, dialogue is directed mostly to the center channel and remains clear and understandable. The track sports some nice stereo sound effects that are somewhat immersive, and Stewart Copeland’s percussive score benefits from the wider dynamic range.

The only bonus features included on this double feature disc are the trailers for each film in 1080i.

Fans of either film (or both) will be pleased that MGM licensed these out for Blu-ray, since neither of these low-brow comedies are considered classics, but each does have a fairly loyal but small fan base. This is likely the best these two films are ever going to look or sound, although it would have been nice if Men At Work could have included at the very least a commentary track by its director.

I always liked Men At Work a great deal, guess it has sort of a cult following these days. I find it a pretty entertaining well-made comedy with the Estevez brothers in fine form. The story is complete innnocent nonsense, of course. As performers they're very different types but it always works with them together on screen, both actors I always found were extremely underrated. I have the old R2 DVD which looks very good and sharp, so I can imagine this new release is only way better.
E

Liked both of these back then, $13.00 for a double feature is of course a deal.

Huge Rodney fan here. I wish they would have gone with EM and Back to School. Those 2 and Caddyshack were Rodney's best 3. I'd love a box set of all his audio and video stand up shows that were recorded. I have one set that includes a lot of TV Rodney, but stuff is missing.
You must log in or register to reply here.