Some series are best thought of as guilty pleasure content. Drop Dead Diva, currently airing Season 5 on Lifetime, definitely falls into this category. While a legal dramady of sorts, the cases are far more reminiscent of Alley McBeal than Law & Order. To briefly catch you up on the storyline, in season one we encountered Deb, a perky if somewhat airheaded blonde model who aspired to be an actress in LA. While putting on her makeup on the way to an audition, she crashed her car and died; in a protest in heaven, she sent herself back to earth and found herself in the body of Jane, a powerful LA lawyer, who also happens to be a larger sized woman. Deb struggled to find her way in this new body, but as season 1 progressed, she found that she had gained much of the memory and training of Jane, and it would come to her whenever she needed it. Now that you have the basic rundown, lets talk about season 4, and this DVD release. 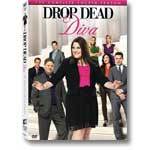 Fans of the show had enjoyed a pretty even pace for the first three seasons of the series, but Season 4 had a big, big change. Ben Feldman, who in season 1-3 played Jane's guardian angel moved on to accept his role on Mad Men. This made way for Jane's new guardian angel - Luke. And the drastic change in style and demeanor with a new guardian angel in the mix wasn't a crowd pleader for most; the show went from fairly sweet and saccharin to having a somewhat snarky feel to it that didn't quite work for a lot of fans, myself included.The series maintains a lot of what makes people love it, though.. cute but silly cases that would never appear in a real court room, a very woman friendly cast and roles, and a surprisingly positive look that things can work out for all involved. Let me just say if you are watching a Drop Dead Diva episode, you are almost guaranteed to see a mix of unique guest stars and some fun moments. It is part of what makes Drop Dead Diva what can best be called comfort TV.Season 4 runs thirteen episodes. The episodes run the gambit from typical Drop Dead Diva settings - a cashier checker played by Patty Duke who tackles a thieving customer to the guilt of a promoter who knew party drugs were being sold at a rave they sponsored. Through it all, the love triangle that puts sets up Jane & Owen, her new love with a judge and Jane & Grayson, the fiance of her former self Deb, percolates the entire season, concluding with a bit of a cliff hanger that ended season 4.The season as a whole for me was very uneven, I had enjoyed seasons 1-3 quite a bit, but found the loss of Ben Feldman's Fred to be a real blow for chemistry within the show, and the introduction of Luke was just too different for the show to spin and really work in that way. The season as a whole still acquitted itself in all the court scenes, but it lacked some of the fun that seemed effortless in previous seasons.Disc 1:Welcome Back - Jane & Owen are in Italy, on their grand adventure from Season 3, when trouble comes calling, asking Jane to return home and accept new powers at the office.. plus new benefits.Home - Grayson thinks he knows the secret, and that Jane IS Deb. Luke, Jane's new guardian angel tells Jane she must make sure that he loses that entire line of reasoning. Jane and Grayson work on a case for emancipation of a minor.Freak Show - Stacy's new business plan, called 'Pake' is about combining pies and cakes It's telegraphed, but that's OK. Along the way Stacy meets a new potential business partner that Jane just doesn't trust. The case of the week is the firing of Rita a cashier played by Patty Duke who became a bit overzealous at stopping theivery in her store.Winning Ugly - Two women find themselves fighting over a rat who they believe contains the soul of an ex-husband and current lover. Meanwhile Jane faces down a reality TV producer when a suicide results.Happily Ever After - A school finds out a teacher has online videos that show them as a married couple in a fairly graphic way. The firm fights the case to see about getting the job back. Jane has a big decision ahead of her in moving forward with Owen, changing the dynamic between Jane & Grayson.Disc 2:Rigged - The firm takes on an case invovling the death of an engineer on an oil rig, only to discover a new hire within the firm is leaking information to the oil company. Serena Williams guest starts as an attorney. (Yes, that Serena Williams)Crushed - Jane takes on a case involving a babysitter and the death of another teenager.Road Trip - The firm finds itself in hot water as the inclusion of a new potential partner links it to a money laundering scandal.Ashes to Ashes - Maybe one of the most difficult, and kind of gross episodes ever to air, a woman is addicted to eating the ashes of her dead husband, and the case takes a strange turn when the Mother in Law's involvement gets exposed. Still icks me out.Disc 3:Lady Parts - Grayson and Kim defend an artist against decency claims.Family Matters - Jane represents the parents of a comatose girl who was drugged at a rave. Teri and Luke pretend to be Jane & Owen in order to do some cake sampling.Picks & Pakes - Intellectual Property fight comes to Jane, as Stacy's Pakes store is challenged over copyright validity, as a man claims he invented Pakes first. We have an in-courtroom "pake off".Jane's Getting Married - An old friend of Deb's refuses a surgery to remove a brain tumor which is making her smarter, meanwhile Jane walks down the isle, and Grayson still isn't totally out of the picture. (ends in a cliffhanger)

Drop Dead Diva was originally recorded and presented on Lifetime in High Definition, so it's no shock that the DVD simply can't match my DVR Recordings. In doing a back and forth between the two, I find that the DVD has all of the typical issues that drove so many of us to select HD formats; fields of black, especially notable in some of the outfits have a tendency to look pixelated, and some small details, in a few cases actually important to the show get completely lost. This is most obvious in moments where we see people's phones or tablets, which simply doesn't translate as effectively in SD.That said, it's hard to ask DVD to handle tasks that DVD was just never equipped to take on. In comparison to many TV on DVD productions, this is a decent encode that faithfully renders the show. In a series of 13 episodes, it was obvious one disc would end up with 5 episodes, but the encode on all titles is pretty similar. As far as a DVD presentation goes, this is actually quite good, it just can't live up to it's HDTV roots.

The audio is a very faithful, near perfect copy of the HDTV presentation. Offered in Dolby Digital 5.1, the audio mix gives the right amount of bounce while staying mostly focused on dialog. Don't expect a lot of LFE from this series, but there is still a lot here to like. The dialog is crisp and clear, and while ambient noise isn't a huge part of the show, it still sounds good when needed.

There are 14 deleted scenes across all three discs:Disc 1:Teri in the cabJane space, owen hungryKim Found somethingLuke loves onestopdiscussion of the affairParker isn't anti-pornKim has a planMarket Research Disc 2:Kim Shows Parker HeadlinesGina Makes a CallStacy has plans with LukeDisc 3:Grayson arrives in courtPaige & Kim LunchPaige Testifies Disc 2 also provides a 2:54 blooper real. Disc 3 includes several Sony trailers. None of the deleted scenes are stunning, most are short, one minute segments that end up as mostly filler. Still, it's good to see how the show might have expanded on certain ideas.

If you are a fan of this show, there is a lot here to like. The show is a comfort food summer season for Lifetime entertainment, and I've often found it an easy recommend for those that like more unusual legal dramas. Basically, if you found anything cute about shows like Judging Amy or Alley McBeal, then Drop Dead Diva is the kind of show that fits into that wheelhouse. It's a guilty pleasure here, and a lot of people will enjoy it.