Filmed natively in 3D as the 1950s 3D craze was winding down, Dragonfly Squadron was unfortunately only released theatrically in 2D. The 3-D Film Archive has now meticulously restored this “lost classic” to its originally intended 3-D glory, as well as correcting misalignment issues that often plagued 3-D films from this era, with outstanding results. 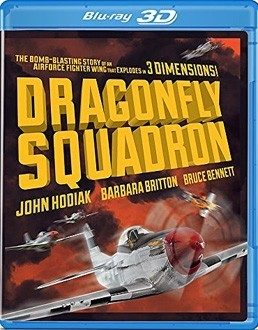 The United States is sitting on the sidelines, training South Korean soldiers how to fly P51 Mustang airplanes in battle, while the United Nations tries to decide to sanction their involvement in the conflict. Major Matt Brady (John Hodiak) is deployed to lead the squadron, and is joined by Capt. MacIntyre (Gerald Mohr). Brady meets up with an old flame, Donna Cottrell (Barbara Britton), who is living on the base with her husband, Dr. Stephen Cottrell (Bruce Bennett). It seems that Brady and Donna had a brief romance when Cottrell went missing for a time and was thought to have been dead, making things a bit awkward for the three. As training progresses with the pilots, Brady is informed that an invasion from North Korea is imminent, and that the South Korean pilots are to be released to active duty immediately while all Americans are to be evacuated. During the evacuation, the base is attacked, and the evacuees are chased by North Korean tanks, until UN sanctioned air support arrives to save the day.To be honest, I am not a big fan of war movies, and Dragonfly Squadron often plays like a soap opera with its love triangle subplot when its not spending time with long patches of narrative while its characters wait for the invasion to occur. The performances by its leads are often wooden, but it is fun to pick out Chuck Conners and Fess Parker in supporting roles.

The restoration work performed on this film by the 3-D Film Archive is certainly commendable. Scanned in 4K and preserving the film’s intended 1.66:1 aspect ratio, the 1080p AVC-encoded 2D presentation has decent contrast resulting in a pleasing grayscale with whites that never clip, but black levels don’t quite get inky enough. Film grain was left intact, which may be distracting for some, but represents how it would likely appear in a movie theater back in 1954, but providing detail that many possibly couldn’t see until now.For the 3-D presentation (included on the same disc), Greg Kintz of the 3-D Film Archive painstakingly fixed many of the inherent misalignment issues between the left and right eye images while cleaning up the picture as best he could without introducing any additional artifacts or anomalies. The result is a film with a great deal of depth, allowing the viewer to experience what a film from the Golden Age of 3-D was like. For fans of pop-out effects, they are few and far between, but that’s the way the film was made. One thing many viewers will notice, however, is that there are many instances where minor scratches as well as positive and negative dirt appear in one eye but not the other, causing a strange sensation for those not accustomed to it. These are “baked” into the print, but, again, would be noticeable when seen in a movie theater back in 1954. If you’d like to read more on the background of this film and the restoration efforts, check out the article on the 3-D Film Archive’s website.

The audio, presented in PCM 2.0 mono, is about as good as it can be. The track has been cleaned up, removing most of the more audible pops, surface noise, and hiss while maintaining dialogue that is clear and understandable.

Dragonfly Squadron may not be a great movie, or everyone’s cup of tea, but fans of 3-D, particularly from the Golden Age, should seriously consider picking this one up as a way to thank and congratulate the 3-D Film Archive for their hard work at making this long-forgotten film available finally in 3-D as it was intended to be seen, and to hopefully convince the rights owners of other 3-D films to open their vaults and make their films available to the public.

Thank you very much, Todd!

Support classic 3D! Let the studios know there's interest out there, and revenue for them.

The gentleman who complained of "pixelation" seems intent on posting his negative review everywhere.

If you good people don't mind, would you please post your honest reviews and ratings on Amazon? Greg and I would be most grateful.

I certainly will, once my copy arrives.

I left a positive review on Amazon.

I do have a 3D question for Bob or Greg. When actors are at or in front of the stereo window, there are three scenarios for the background.

Is the third option something that the camera man made a mistake on or is this done on purpose. I have never seen this type of 3D scene before.

An example is at 01:02:50 when The Rifleman er Chuck Connors is completely in focus and everything around him is a blur. I think this only occurs for maybe 5 to 10 seconds in a couple of scenes - only at night. I am not complaining. The 3D is great throughout the film. Just a question.

As far as popout, I did notice a number of scenes where actors are outside the stereo window, similar to the following but not as far out.

The Depth of Field question can be a somewhat complex one as lens type, F-stop, subject placement in regards to the camera location, along with other variables can all play a part in determining the DOF. Numerous papers and formulas from simple to highly complex have been written on the subject. The very short answer is these decisions are executed by the cameramen who may opt to go narrow to keep the focus of attention on the actor for a given scene, or certain settings were chosen perhaps due to lens or light limitations happening at the time of a given take. I'm currently not at home & so I can't look at that listed shot, but suspect it would fall into this category as well.
You must log in or register to reply here.