An entertaining anthology of short horror tales with connecting bookends, Freddie Francis’ Dr. Terror’s House of Horrors was one of the first and one of the best of the fright films featuring a collection of stories. Though special effects of the era can’t do justice to the supernatural elements of the stories that modern CGI would afford such tales, their cleverness and entertainment value isn’t substantially lessened by the rather primitive representation of the paranormal in these mostly delightful little chillers. In fact, the sometimes cheesy effects work is actually part of the film’s charm. 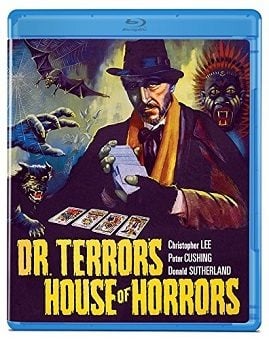 Dr. W. R. Schreck (Peter Cushing) enters a railway compartment with five passengers and proceeds to use his tarot cards (which he deems his “house of horrors”) to tell each man’s future. Architect Jim Dawson (Neil McCallum) finds out some alterations to a property of his in the Hebrides are going to bring him into contact with a werewolf. Bill Rogers (Alan Freeman) is going to discover a most unusual plant growing on his property, a vine that will prove tremendously stubborn to get rid of. Trumpeter Biff Bailey’s (Roy Castle) trip to the West Indies is going to introduce him to some unforgettable voodoo rhythms which he’s forbidden to bring back to London but which the musician in him can’t seem to forget. Smug art critic Franklyn Marsh (Christopher Lee) is going to be responsible for a hit and run accident of one of his most despised artists Eric Landor (Michael Gough) costing the artist his hand. And, Dr. Bob Carroll’s (Donald Sutherland) partner Dr. Blake (Max Adrian) is about to be suspicious that Bob’s new wife Nicolle (Jennifer Jayne) might be a vampire draining blood from the young children in the neighborhood.

While four of the five segments feature neat twists (only the third segment “Voodoo” is below par and not really a worthy companion for the other tales), Milton Subotsky has imbued his screenplay with enough clever touches and unexpected shocks to earn the movie a place in horror movie lore. Freddie Francis directs each of the segments and the beginning and ending bookends with ease and dispatch, and there are a few shuddery moments (however, Mario Bava’s Black Sabbath produced the previous year features three tales, all of which are incredibly scary and gruesomely affecting) even though the gore quotient is quite low and the film’s fright meter may be too tame for real lovers of the genre. The “Hand” and “Vampire” segments are undoubtedly the film’s best (unquestionably why they were saved for the end), but one wonders how much more effective the stories would be now with the modern wizardry available to filmmakers to make these stories really frightening.

Peter Cushing and Christopher Lee run away from the pack with their expert, entertaining performances: Cushing sporting an accent of unplaceable origin and Lee filled with the cold smugness of innate superiority. Also registering with wonderfully entertaining performances are Michael Gough as the hounded artist who gets his own taste of revenge in a couple of ways, Max Adrian who as Dr. Blake has some secrets of his own that bear some subterfuge, and Neil McCallum who finds a werewolf where he least expects it. Yes, that’s Bernard Lee (“M” from the Bond films) and Jeremy Kemp doing effective work in the “Vine” segment, and Jennifer Jayne makes for a most fetching new bride.

The film’s Techniscope 2.35:1 theatrical aspect ratio is faithfully presented in a 1080p transfer using the AVC codec. Apart from some slight dust specks near film’s end, the presentation is wonderfully free from video artifacts and offers a sharp, clean picture that’s quite colorful (flesh tones are especially inviting) and very atmospheric. Black levels are good if not quite first-rate, and contrast has been consistently maintained for optimum picture quality. The movie has been divided into 8 chapters.

The DTS-HD Master Audio 2.0 mono sound mix is very typical of its era with not much on the low end of the sound scale, but with dialogue, atmospheric music by Elizabeth Lutyens and Tubby Hayes, and sound effects that all work together harmoniously without one dominating over the other. No age-related problems with hiss or crackle spoil this fine aural presentation.

There are no bonus features on this Blu-ray disc.

Dr. Terror’s House of Horrors gets a most welcome widescreen presentation on Blu-ray with very good picture and sound elements adding to the fun. Fans will likely be quite happy to add this to their collections despite its lack of anything substantive in the bonus features category.

Boy! Not even the inclusion of the theatrical trailer?! This outfit seldom extends itself beyond providing the actual movie.


I am grateful for the film itself finally being minted in the blu-ray medium and in DR. TERROR'S proper widescreen format albeit it is unfortunate that more of a fan-driven company like Kino couldn't have taken on the challenge.


I love the horror-premised anthology movies especially when they are handsomely stocked with a great cast of ensemble performers.

The UK version seems to have a few extras(Odeon Entertainment).


This collector's version is strictly limited to 4,000 individually numbered Steel Books, that also include a 12 page appreciation booklet by horror writer, Johnny Mains. Christopher Lee and Peter Cushing star in this British horror classic from Amicus Productions and Milton Subotsky, which was released in 1965. Five possible futures unfold in a card reading on a train - but they all end in...death!...


Includes a new documentary but no trailer listed.

I can't get over all the online buzz about this movie. I saw it when it was released in the sixties - I was mad for horror films then - Lee/Cushing, yeah. I remember coming out of the cinema thinking, what a load of old rubbish. I've seen it once or twice since then & I haven't changed my mind...& it seems to have become this big cult movie. I dunno.
You must log in or register to reply here.