The sport of skiing hasn’t been one that has been widely represented in movies, so Michael Ritchie’s Downhill Racer has that going for it from the outset. Being a sports-themed movie, however, there are still certain facets that you know are going to be present: the build-up to a big event (in this case, the Olympics) with an occasional setback, the temptations that momentarily distract the protagonist from achieving his goals, and the climactic contest with everything on the line. Downhill Racer has all of that, but it’s presented in such a spare style and with some exciting sports footage that it still manages to compel despite the inborn clichés and subsequent payoffs. Criterion’s high definition upgrade to its 2009 DVD release is well worth the expense for fans of the movie. 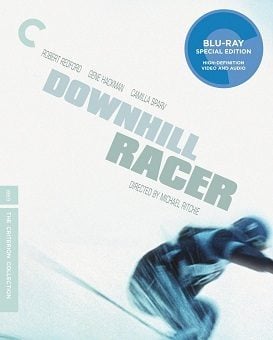 Reckless downhill skier David Chappellet (Robert Redford) is a speed demon on the slopes, but his wild, unconventional skiing style usually results in feast or famine: either first place or a complete wipeout. Chosen to be a member of the U.S. Men’s Ski Team, he spends three seasons working his way up the rankings to compete at the Winter Olympics. Other members of the team envy his success but resent his lack of team spirit. Coach Eugene Claire (Gene Hackman) echoes the others’ sentiments: David’s talent may not be enough to overcome his uncontrolled, hot dog style of competing. Along the way, David also becomes attracted to skiwear representative Carole Stahl (Camilla Sparv) whose company wants to use David for endorsements should he medal at the Olympics. But Carole is as free a spirit as David refusing to display contrite behavior or thoughtful treatment of a boy friend when other matters occupy her thoughts.

James Salter’s script doesn’t quite give us an antihero as our protagonist (not in the same way Kirk Douglas in Champion or Paul Newman in The Hustler could be thought of as self-centered and self-absorbed). He chafes at poor placements in early meets, but he does buckle down to get in better shape and follows the advice of his coach in terms of training (in the matter of extracurricular activities, not so much). His confidence in his abilities doesn’t spill over into contempt for his other teammates or his rivals from other countries. So, Redford’s David garners a much stronger rooting interest from the viewer than he might otherwise have had. It’s also interesting to see him get as good as he gives in the relationship with the alluring but freewheeling Carole, one of the most mature male-female relationships seen in the movies up to that time (it might have been even more thoroughly developed had the producers not been going for a lean, spare motif for their storytelling; in certain places, director Michael Ritchie’s pokey pacing is also a handicap). The Alpine skiing footage is quite extraordinary, especially our first trip down the ski slope with Redford’s David seen almost completely from his point of view in a breathless race to the finish. It would seem to have been a good idea to return us to that point of view for David’s climactic run for the Olympic gold medal, but we only get a few seconds of the same exhilarating fleetness that we experienced earlier. There’s an ace in the hole for that contest, however, as Redford and Hackman see the gold medal within their grasp and yet just as quickly in danger of being lost as the German skier who follows him beats David’s time at the halfway mark. All of a sudden, the movie ratchets the tension up unbearably for a few excruciating seconds before it ends very abruptly.

1969 was a big year for Robert Redford with his showcase role here and his superstar making turn as the Sundance Kid in that little Fox movie he also churned out. In Downhill Racer, there are some excellent moments with his character facing off with his father and in his final meeting with Carole. He certainly holds the screen effortlessly proving that superstardom was well within his reach. Gene Hackman, himself on an upward trajectory toward the apex of stardom, does very well with a somewhat underwritten role as the coach who must be trainer, cheerleader, fund raiser, and more for the team he obviously loves. Camilla Sparv has a carefree manner that does well with her devil-may-care character of Carole. Jim McMullan as the American ski star whose place Redford usurps and Karl Michael Vogler as the German favorite for the gold medal each gets an effective moment or two to establish his character, and Kenneth Kirk as David’s roommate D. K. who seems simpler and more naïve in manner and personality also makes a firm impression.

The film’s original theatrical aspect ratio of 1.85:1 is faithfully reproduced in this 1080p transfer using the AVC codec. Any problems with sharpness or spotting was with the original photography and not with the transfer which seems in many ways pristine. Color is nicely saturated even if skin tones occasionally take on a hot pink quality. The whites from all that winter snow are very crisp and pure in the transfer, and contrast has been consistently applied for a well-rounded picture. The movie has been divided into 12 chapters.

The PCM 1.0 (1.1 Mbps) sound mix has some early slight distortion in the Kenyon Hopkins music and some high-pitched dialogue though most of it has been well recorded and has been well mixed with the background score and the very effective atmospheric sound effects of downhill racers at work. The film was a low budget affair, and the sound design lacking much in the way of real bass as it is might be attributed to that.

Robert Redford/James Salter Interview (33:48, HD): the star and the screenwriter speak in counterpoint in these interviews recorded in 2009 for the movie’s DVD release. Their remarks mainly deal with the difficulties in persuading Paramount to mount the project at all and then the changes that took place from final draft of the script to the finished product which both men feel was not given a real chance at success by the releasing studio.

Walter Coblenz/Richard Harris/Joe Jay Jalbert Interview (29:51, HD): the production manager, the editor, and the technical advisor speak in counterpoint remembering the challenges of working on the project in winter weather but with the great assurances from a supportive team.

Michael Ritchie Audio Interview (1:01:29): the director’s 1977 appearance at an American Film Institute seminar about his work traces his career back to being a gofer for television networks in 1960, getting his first directing jobs in documentaries, and then moving on to series television and later feature films.

How Fast? (12:25, HD): a vintage 1969 featurette with Robert Redford narrating a piece on skiing in general and Downhill Racer in particular. Various clips from the movie are shown, but there are no interviews with any of the cast or crew.

Enclosed Pamphlet: features a cast and crew list, two vivid color stills from the film, information on the video and audio transfer, and an interesting essay on Michael Ritchie’s first feature film by critic Todd McCarthy.

Downhill Racer seems terser than it needed to be and a bit dramatically underdeveloped as well, and yet the racing scenes and the examination of a budding star on the rise (both the character in the film and the actor playing him) still ring true and make the film one very much worth seeing.

Thanks for this review, Matt. I am a big fan of this film as it is...I'm pretty certain...the only feature film (we are not counting documentaries here) that captures the sport of World Cup Skiing in all it's glory. It is a tremendous ride and takes a different approach than many sports films by not taking the "likable underdog that triumphs in the end approach."


There is no big focus on the athlete's struggles or showing his dogged determination, rather David Chappellet is a self-centered, reckless, unthinking, and not at all really likable jerk. He also is not particularly bright, not well educated, and also not particularly well traveled until he gets the call to replace an injured US Ski team downhill racer. Toss in the fact that he is a bit socially inept and thinks quite a bit of himself and his talents and you have an interestingly flawed character to build a film around.


Redford shows in this film he is not just a pretty face. The man acts and not just by delivering his lines. Much of his performance is body language and what he shows on his face. This is a very physical performance and he carries it off wonderfully. Redford turned down playing the husband role in Rosemary's Baby (Polanski was originally set to direct Downhill Racer) because he wanted so much to play this part instead. Personally, I think he made a great choice.


Gene Hackman is great as the coach of the team who does not really like Chappellet but knows he needs him to deliver a possible medal at the Olympics to keep funding coming in.


Micheal Ritchie who took the director's seat once Polanski was out does a fantastic job with this film. They get amazing shots of the skiers in action and flat out stunning hand held skiers perspective shots of racing down the mountains. Off the slopes we also get a you are there feeling and real physical presence from all the actors. This film is well acted, directed, and staged in every way. At the end you have a real sense that you have been to European locales with the US Ski team.


Really, this film does stand out because of the fact that there are so few serious films about skiing. Sure there are plenty about getting drunk and chasing girls at a resort but not ones that focus on the actual athletes and what they do.