Double Indemnity insures its claim on Blu-ray with a 70th Anniversary Edition that provides a lovely HD picture and all the bonus features from the 2006 Legacy Edition DVD. The film is a film noir classic, one of the first of its kind and still one of the best, featuring extraordinary performances by Fred MacMurray, Barbara Stanwyck and Edward G. Robinson, a crackling script by Billy Wilder and Raymond Chandler, and beautifully understated direction by Wilder This is another thorough study of a classic film on disc, complete with a pair of detailed commentaries, a robust featurette about the movie and even the inferior 1973 TV movie for comparison purposes. This release is Highly Recommended. 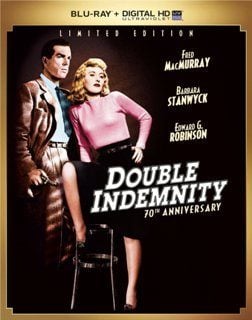 Double Indemnity is presented in a 1.33:1 1080p AVC encode (@ an average 34 mbps) that provides a lovely high definition picture. Grain structure is visible along with plenty of detail. As with the Touch of Evil Blu-ray, watching this edition offers an experience as close as one can imagine to sitting in a movie theater watching the film being projected. In addition to really being able to see the beauty of Seitz’s compositions, the transfer reveals fine details in the various costumes and sets along the way. This is really a pleasure to see.

Double Indemnity has an English DTS-HD MA 2.0 mono mix (@ an average 1.8 mbps), which presents the dialogue and Miklos Rozsa’s iconic score with great clarity. A Spanish DTS mono mix is also included on the disc.

As with the 2006 Legacy Edition DVD, the Blu-ray of Double Indemnity comes with two scene-specific commentaries, along a thorough featurette, the original trailer and the 1973 TV movie version. Any fan of this movie, or of film noir in general should enjoy these bonuses as a fine group of supplements to the film.Commentary with Richard Schickel – Film Historian Richard Schickel provides one of his trademark thorough scene-specific commentaries, going through each scene sometimes on a shot-by-shot basis. This commentary is a textbook example of a “Film School in a Commentary”.Commentary with Lem Dobbs and Nick Redman – The second commentary track features Lem Dobbs and Twilight Time’s Nick Redman in a fairly engaged dialogue about the filmmakers and all the various tricks they’re getting away with along the way.Shadows of Suspense (37:56, 4x3, 480p) – This featurette covers the reactions by multiple filmmakers to Double Indemnity while also recounting many stories about its production. There’s a lot of ground covered here, and the featurette does so quickly and cheerfully.Introduction by Robert Osborne – (2:30, 4x3, 480p) – This is TCM’s Robert Osborne providing a really fast introduction to the movie, pretty much going through two or three of the points discussed at much greater length in the featurette and the commentaries.Theatrical Trailer – (2:16, 4x3, 480p) – This is not listed on the packaging, but the original trailer is available here. This is the same copy available on the prior DVD release.Double Indemnity (1973 TV Movie) (1:13:53, 4x3, 480p) – This is one of those presentations that leaves the viewer wondering aloud “What were they THINKING?” The sad part of this pitifully ordinary remake is that so many talented people were involved in making it. In the primary three roles, we are now given Richard Crenna, Samantha Eggar and Lee J. Cobb, all of whom are capable of much better performances than we see here. The adapted script is from Steven Bochco, of all people. The plot elements are the same, the sequence of events is the same. And yet, the whole enterprise just doesn’t add up. Maybe it’s the shock of seeing this story presented in 1973 fashions, in garish color, bereft of the beautifully shadowy imagery and simplicity of Wilder’s original film. Maybe it’s the disappointment in seeing iconic scenes falling completely flat in their delivery. Maybe it’s just the overwhelming sense of Wrongness of the whole idea. But this exercise is at least useful – it’s a textbook example that movies are much more than the sum of their parts. There’s a certain alchemy to any great movie, and it isn’t something that can be achieved with a paint-by-the-numbers approach. It’s an object lesson not to remake a great movie just because you think you can – and this is a lesson that many filmmakers today could do well to heed, particularly as we now see almost every movie of the 1980s being dusted off and remade with a new cast. (That is not to say that every movie of the 80s was great – we’re getting remakes of even the mediocre ones…) Perhaps most importantly, this TV movie acts as a negative proof of how good the original movie actually is. I wouldn’t recommend sitting through more than five minutes of this, but within that time, you’ll come to appreciate Wilder’s film all the more.Archive Packet – The Blu-ray includes in the packaging a little envelope containing a miniature reproduction of the US theatrical poster, three lobby cards from the US theatrical release, and a still photo from an alternate ending to the movie. (The alternate ending really doesn’t deviate from how the movie actually does end – it’s just that the completed movie wisely chooses to call it a day before getting to the deleted scene.)Digital/Ultraviolet Copy – The packaging has an insert that contains instructions for downloading a digital or ultraviolet copy of the movie.Subtitles are available in English, French and Spanish for the film itself, as well as for the special features. A standard chapter menu is included for quick reference.

Double Indemnity gets fine treatment on Blu-ray, with a lovely high definition transfer and all the bonus features from the solid 2006 DVD release. I am pleased to Highly Recommend it as a Must-Own for fans of film noir or cinema in general.

I thought the second commentary with Nick Redman a little tedious to get through on one shot. I'll try the Schickel one day. I wish every major studio adopts what Universal is doing by offering Digital/Ultraviolet copy of their catalog films in 1080p.

Great review! ++ What a classic....
You must log in or register to reply here.