Wonderfully directed by British director, Nicolas Roeg, and featuring entirely natural performances by Sutherland and Christie (including the oft-discussed love making scene,) Don't Look Now is a masterful exercise in the horrors of grief, uncertainty, and that unsettled feeling we all have from time to time that we just can't seem to shake. Criterion lavishes genuine affection upon its superb high-definition release. 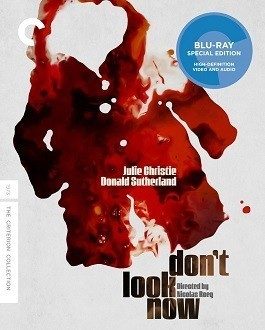 “I've seen her and she wants you to know that she's happy. She was laughing.”

After losing their daughter to an accident in their garden, the Baxters (played by Donald Sutherland and Julie Christie) head to Venice where John Baxter is overseeing the restoration of an old church. An encounter with two sisters, one of which is blind and has the gift of second sight, presages a dire future for Mr. Baxter, and soon they find their lives slipping out of their hands.

Based on a short story of the same name by Daphne du Maurier, Don’t Look Now excels at drifting cleverly ever-deeper into an upsetting sense of loss of control. Whipped up anxiety from the portending of demise and exacerbated by unsettling glimpses of what appears to be the deceased daughter walking around the tight streets of Venice, form a central theme of loss and inevitability. The precognitive horror at the root of the story also serves up a more subconscious tale of fear; fear of the inevitable, the illusion of choice, and the inescapable drama of falling victim to what we chase. It’s deliciously layered for what is, ostensibly, a dramatic horror with supernatural overtones. And the accompanying plot of a killer taking lives in the city adds to that sense of dread and horror.

Filmed with a released, naturalistic approach, the style and flow of the images adds to the unsettled mood, and the psychology behind the masterful editing bring about an emotional pull, a gravity into which we fall deeply trying to unlock the mystery and understand the images – just as Sutherland’s John Baxter does. Don’t Look Now shows the certain hand of a gifted director, in how moments are framed, expressions captured, and glances on screen for just long enough a moment to surprise. But the assembly of the film, through masterful editing, is where Don’t Look Now often gains its greater praise. And well deserved is that praise. Often exploring collage approaches, layering meaning upon a scene with intercuts of seemingly unrelated things, misleading viewers with choice shots interwoven, moments in slow-motion cut with against real-time – it creates a highly impressionistic, fractured, yet fluid visual style. These are cuts with a purpose, and that purpose is to create an emotional response from the audience – to unsettle, startle, lure, and mislead – which the film achieves so well.

Truly the power of Don’t Look Now, besides the gifted filmmaking, is heavily in the corner of the performances. Donald Sutherland and Julie Christie as John and Laura Baxter, through much improvisation, create a flawless dynamic of marriage such that we cannot doubt that they are a couple, in love, struggling with loss. Their interactions are of such honest heft it is no wonder the surprisingly passionate and studied love-making scene they share has been rumored not to be acting at all. Sutherland is superbly watchable as he finds himself losing grip, rocked by flashes second sight (though he remains uncertain of what he is seeing, unlike Heather and Wendy, the two old ladies,) and finds the relative stability of his life troubled, becoming increasingly suspicious and unhooked. Hilary Mason plays Heather, the blind sister with the ‘gift’ of second-sight, and Clelia Matania plays her sister, Wendy. They are suitably innocent and disturbing. As the police inspector, the man John Baxter engages at one point in the film when he believes his wife may be missing, Renato Scarpa is stoic, steady.

I first saw Don’t Look Now just a couple of years ago during the annual HTF October Halloween Movie challenge, streaming from either Amazon or Netflix (I don’t recall which.) I adored the film despite not being a particularly good quality viewing. Criterion now present this superb film with a new digital transfer in 4K resolution (on an ARRISCAN film scanner from the original film negative,) approved by director Nicolas Roeg and the results are astonishing.

A beautifully crisp, fine grain film appearance, with remarkable clarity and natural colors (particularly the green grass during the opening scene, after the slightly muted/soft colors of the credit sequence.) The clean-up of the print resulted in the removal of thousands of instances of dirt, scratches and other assorted blemishes, and provides a phenomenal looking film. The slightly grey/brown hues of Venice, shown in the film without attention to the innate beauty and traditionally tourist attractive areas of the city, paint a character unto itself for the film, and the remarkable red that stands out in fine contrast as glimpses of what Sutherland’s character believes to be his daughter, is intense. A moment of two of softness appear but are clearly a part of when the images was captured and thus, this transfer is a wonderful accomplishment.

The original monaural soundtrack has been remastered at 24-bit from the 35mm magnetic track, Pino Donaggio’s first film score, is appropriately thin – that is, finely discordant and of few instruments as the scenes demand. There’s some sadness, romantic (even playful) lamentation in the piano/wind instruments, notably from the film’s love theme, that aid the effectiveness of the picture. Dialogue is very clear, the audio nicely balanced, and issue-free.

A superbly informative, well-rounded collection of special features, some new, that provide a welcomingly in-depth examination of this work. Though a few years old now, the interviews with Steven Soderbergh and Danny Boyle discussing the influence and potency of Roeg’s work is of great value. The essay, too, by David Thompson is a good (but brief) read.

Shot with an intensely creative eye and assembled with mastery, Don’t Look Now is a thrilling film of potent horror. The story of deterioration of sanity and certainty, with flashes of unsettling imagery and a disquieting tone as the film progresses, Roeg’s film cleverly deviates from convention and achieves great chills and surprise.