Hercules is one of those Disney movies with truly something for just about everyone. There’s a lovable, goofy protagonist, a side-splittingly funny but evil villain, a femme fatale who sees the error of her ways before it’s too late, cute, cuddly sidekicks in the best Disney tradition, and a tuneful, toe-tapping song score of charm, wit, and lyricism. This movie with just enough winking nods to classic Greek mythology to keep things honest is all about everyone having a good time. 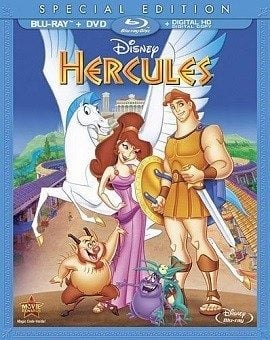 Disney’s previous smash hit Aladdin obviously gave the filmmakers all the inspiration they needed for their unstuffy, jivey adaptation of the Greek myths about the legendary strongman. This is a hip Hercules, and everyone else in the movie also speaks in a kind of sassy lingo that makes this very much a film of the modern rather than classical age. There is none of the formality and seriousness of Disney’s Pocahontas or The Hunchback of Notre Dame in Hercules. Everyone here is clearly out for a spirited lark and not for something weighty or meaningful.Many of the mythological facts we have about the person of Hercules are violated here. It doesn’t matter, of course, that his parentage is all wrong and that his enemy is made to be Hades, lord of the Underworld, rather than his stepmother Hera (according to the myths). That is the set-up we’re presented with here. Hercules is trying to earn his way to being reclaimed as a god on Mount Olympus by completing a series of brave deeds that should prove his god-like qualities and worthiness of being remade into a god. In order to keep Hercules out of Mount Olympus while at the same time attempting to mount an attack to dethrone Zeus as lord of the universe, his bitter brother Hades sends one obstacle after another for Hercules to deal with. Among the distractions sent to occupy Hercules’ time is Meg, a voluptuous henchwoman trying to win her freedom from the land of lost souls of the Underworld. Hercules’ infatuation with her and her on again-off again involvement with him make up the bulk of the picture’s 93-minute running time.The style of animation used here is far from the lush contours of Beauty and the Beast or the majestic savannahs of The Lion King. The colors are overly bright, almost neon in hue, and the drawing is very stylized with jagged edges and almost expressionistic details. The drawing does enhance the snappy, jazzy tone of the picture offering a breath of fresh air to the traditional Disney look of the era, but one accustomed to the stateliness of Beauty and the Beast or The Lion King, not to mention the many Disney classics reaching back in the archives to Snow White and Pinocchio, might not be much inclined to get in the mod, savvy spirit of this piece. But, letting oneself enter the film's sass-filled, off-the-wall take on all things classical (with plenty of modern day allusions thrown in) with an open mind will likely result in a very good time to be had.Oscar-winning composer Alan Menken’s score is much less sophisticated than the one he composed for Hunchback, but the half dozen tunes used in the picture are all winners. “The Gospel Truth,” warbled by a chorus of five Greek muses, gets the picture off to a rollicking start (after they hilariously interrupt the stentorian Charlton Heston who had begun narrating the story; they continue to wail impressively throughout the picture) while young Hercules’ ballad “Go the Distance” (singing voice by Tony winner Roger Bart) marks the film’s best number and earning an Oscar nomination for Best Song. Lyricist David Zippel, a Tony winner for City of Angels, contributes witty words for the entire score, but his “One Last Shot” is especially noteworthy with puns and double and triple rhymes in the film’s big production number. Meg’s torchy “I Won’t Say I’m in Love” is wonderful with Susan Egan providing the sultry voice of the character while “A Star Is Born” makes a snappy end to the picture. James Woods, who can be an overaggressive actor in live action films, gets to overact to his heart’s content as the merrily malevolent Hades, and he walks away handily with the movie. Tate Donovan catches just the right degrees of innocence and strength as the grown up title character (Josh Keaton plays the younger version). Danny DeVito has loads of fun as Hercules’ sometimes cynical pal Phil, a satiric take on a typical boxing movie’s trainer/manager character. Bobcat Goldthwait and Matt Frewer play around amusingly as goofy, bumbling aides to Hades.

The film has been framed for this release at 1.78:1 and is presented in 1080p using the AVC codec. Video quality throughout is smooth and consistently contrasted, and the lines in the animation are solid and steady throughout the entire presentation. Sharpness is top notch throughout, and color is rich, bright, and deeply saturated without ever crossing over into blooming. Black levels are aces, and there is no banding to distract from the impact of the images. The film has been divided into 32 chapters.

The DTS-HD Master Audio 5.1 sound mix is excellent throughout with some impressive deep bass throbbing in the LFE channel during the climactic Titan attack and with the wonderful music score getting a full surround spread through all available channels. Most of the dialogue and singing has been placed in the center channel, but there are a few impressive directionalized speech effects including one moment where Hades circumnavigates the soundfield spectacularly. Some of the other action sequences may not quite get the surround spread that a more modern animated action comedy today would receive, but the sound design certainly has nothing to be ashamed of.

The Making of Hercules (9:29, SD): a very brief jump around the production cast and crew of the film (voice cast, directors, composer, lead animators) who offer small sound bites about their aims for the movie.“Go the Distance” Music Video (4:47, SD): Ricky Martin performs the Oscar-nominated song in Spanish for this music video.“From Zero to Hero” Sing Along (2:47, SD): the song sequence from the movie is offered with sing along subtitles.Promo Trailers (HD): Sleeping Beauty, Planes: Fire and Rescue.DVD/Digital Copy: disc and code sheet enclosed in the case.

Hercules may not resemble many of the classic Disney titles, but it’s a hugely entertaining animated spree for anyone of just about any age. The lack of any new or detailed bonus features illustrates clearly that the film is still not nearly as highly regarded by its studio as it deserves to be, but the Blu-ray release is nevertheless highly recommended.

Shouldn't be any DNR on this one, its a digital production.

Seeing how Disney has treated Hercules like a red-headed stepchild since dvd, I guess having an anamorphic transfer finally is enough of a selling point.

Matt thanks for the review, glad to see a positive technical review. Time to upgrade my DTS LD.

I love the vocal performances in the film, in particular Susan Egan, who gives Megara a rather irreverent, Stanwyck-type sass.

classicmovieguy said:
I love the vocal performances in the film, in particular Susan Egan, who gives Megara a rather irreverent, Stanwyck-type sass.
Click to expand...

"Thanks for everything, Herc. It's been a real slice."

I saw Egan act for real in a little-known comedy called "Man of the Century" made just a couple years after Hercules. Well worth seeking out.

I'd love to see the Disney Channel series come to blu-ray; lots of myth-saavy references, as well as some inspired voice casting (remember Garrison Keillor as Norse god Oden?)

Matt: Is the quality of the Ricky Martin video all right?

Did you mean "satyric?"

Peter McM said:
"Thanks for everything, Herc. It's been a real slice."

I saw Egan act for real in a little-known comedy called "Man of the Century" made just a couple years after Hercules. Well worth seeking out.
Click to expand...

Susan went on to play a similar character on the sitcom "Nikki". Wish that show would come out on DVD so I can retire my well-worn VHS tapes.

classicmovieguy said:
Susan went on to play a similar character on the sitcom "Nikki". Wish that show would come out on DVD so I can retire my well-worn VHS tapes.
Click to expand...

Maybe I was focused too much on the leading lady.

*Finally* a *proper* release of "Hercules" to optical media!! That initial non-anamorphic DVD has been collecting dust on my shelf since about December 2000!! (It was one of the first 9 titles Disney released to DVD after the Divix debacle. "Tarzan" -- released in January 2001 -- was Disney's first anamorphic widescreen release to the format.) It's really sad to see, though, that this 2014 Blu-ray seemingly contains the same "supplements" provided with that initial release in the Fall of 2000.In any event, looking forward to August 12th!!

Lord Dalek said:
Shouldn't be any DNR on this one, its a digital production.
Click to expand...

Thanks for the info. I have adjusted the review accordingly.

Maybe I was focused too much on the leading lady.
Click to expand...

Nikki Cox was mercilessly upstaged by Susan in most episodes... IMO... you maybe want to look at the series again.

Thanks Matt. I've always been confused why Hercules has been treated like a red headed stepchild, just like Lord Dalek. I still have the original Limited Edition disc on the shelf. Granted, I don't put it in much, but still.

Mike Frezon said:
Matt: Is the quality of the Ricky Martin video all right?

Although it's in standard definition, it looks clean and reasonably sharp. There are no artifacts like you described at all.
B

Mike Frezon said:
Matt: Is the quality of the Ricky Martin video all right?

UK and US discs are identical I believe...and the UK release is also available in a gorgeous Steelbook.
You must log in or register to reply here.