While investigating the death of a young girl in Jerusalem, FBI agent and Interpol liaison Peter Connelly (Jason Isaacs) uncovers a conspiracy where several different religious sects, with help from archeologists, are trying to accelerate the apocalypse. The series was created by Tim Kring (Heroes) and Gideon Raff (Homeland). 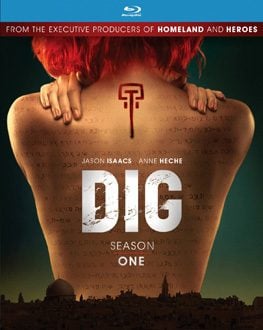 FBI agent Peter Connelly (Jason Isaacs) is in Jerusalem, tracking a murder suspect who fled the US. During a chase through the crowded marketplace, he runs into Emma Wilson (Alison Sudol), a spitting image of his daughter who died tragically a few years earlier. Later that evening, he runs into her again, striking up a conversation as they walk the streets and find themselves at Emma’s workplace, an archeological dig within the underground tunnels in the city. When she turns up dead the next day, Peter becomes the likely suspect, but manages to convince his boss and part time love interest, Lynn Monahan (Anne Heche), to keep him on the case. Meanwhile, in New Mexico at a Christian retreat compound, Pastor Tad Billingham (David Costabile) is preparing a young boy as a high priest. In Norway, a young Jewish boy begins his journey to Jerusalem with a sacrificial red heifer in tow. And under the city of Jerusalem, archaeologist Ian Margrove is searching for the missing gemstones from the breastplate once worn by the Jewish High Priest.

There is a lot going on in Dig, and at times it often feels like information overload. The series also juggles its multiple storylines somewhat frenetically, sometimes making it difficult for the audience to keep track, even though we all know that, eventually, these will all meet up together at the finale. If this sounds familiar, it should, as the series was created by Tim Kring (Heroes) and Gideon Raff (Homeland). And Dig shares some of the same problems that Heroes encountered near the end of its run: an exciting if often confusing premise that ultimately doesn’t pay off in the way one would expect. The first eight episodes build and promise a thrilling conclusion that are a bit of a letdown and are anti-climactic during the final two episodes. And that’s a shame, because Dig is a beautiful looking show, with the pilot shot on location in Israel, with Croatia filling in for Israel for safety reasons (the series was in production during the Israel-Gaza conflict), although the production design team have done an excellent job in making that transition seamless. And although the packaging and menus proclaim this as “Season One,” USA Networks decided to not renew the series days after what would become the series finale aired back in May of 2015. The good news, though, for audiences that stuck it out, is that this first season manages to leave very few threads unresolved.

As I mentioned above, Dig is a beautiful looking show, using different hues in its cinematography to aid the viewer in keeping track of each storyline: browns for Israel, blues for New Mexico, and almost monochromatic for the heifer’s journey. This is all captured nicely, although there seems to be an inherent softness throughout in this 1080p AVC-encoded transfer that was compressed at the typically low bitrates (in this case, averaging 12 Mbps) that Universal continually uses on its TV releases, both on Blu-ray and DVD. There is some occasional banding and macroblocking, but is minimal, at best. Regardless, this is still a definite improvement over the even more heavily compressed 1080i broadcasts on cable and satellite. Disc one contains episodes one through four, plus the longer international cut of the pilot. Disc two contains the remaining six episodes.

The DTS-HD Master Audio 5.1 track included is also an improvement over the lossy Dolby Digital 5.1 used during its broadcast on USA Network. As expected, the track has a wider dynamic range and increased fidelity. Dialogue is clear and understandable, directed mostly to the center channel. Music and effects spread out along the fronts and in the surrounds. LFE is used quite effectively during the action sequences.

Dig had the potential of being an interesting and intriguing conspiracy series, but became the victim of too many intersecting stories that, once they finally came together, couldn’t live up to the suspense they were building up to.