Buckle in - this is a lengthy one.

TL;DR: Building a flex theater with ridiculous aspirations and need help with speaker, sub and sound panel placement based on room layout.

The idea was to have a generic entertainment space, so I wouldn't technically call this a "home theater," more just a fun room. The new space will measure (roughly) 15' W x 35' L x 8' H and will incorporate an Atmos system with a ~bar~ and convertible billiards/dining table in the back half. 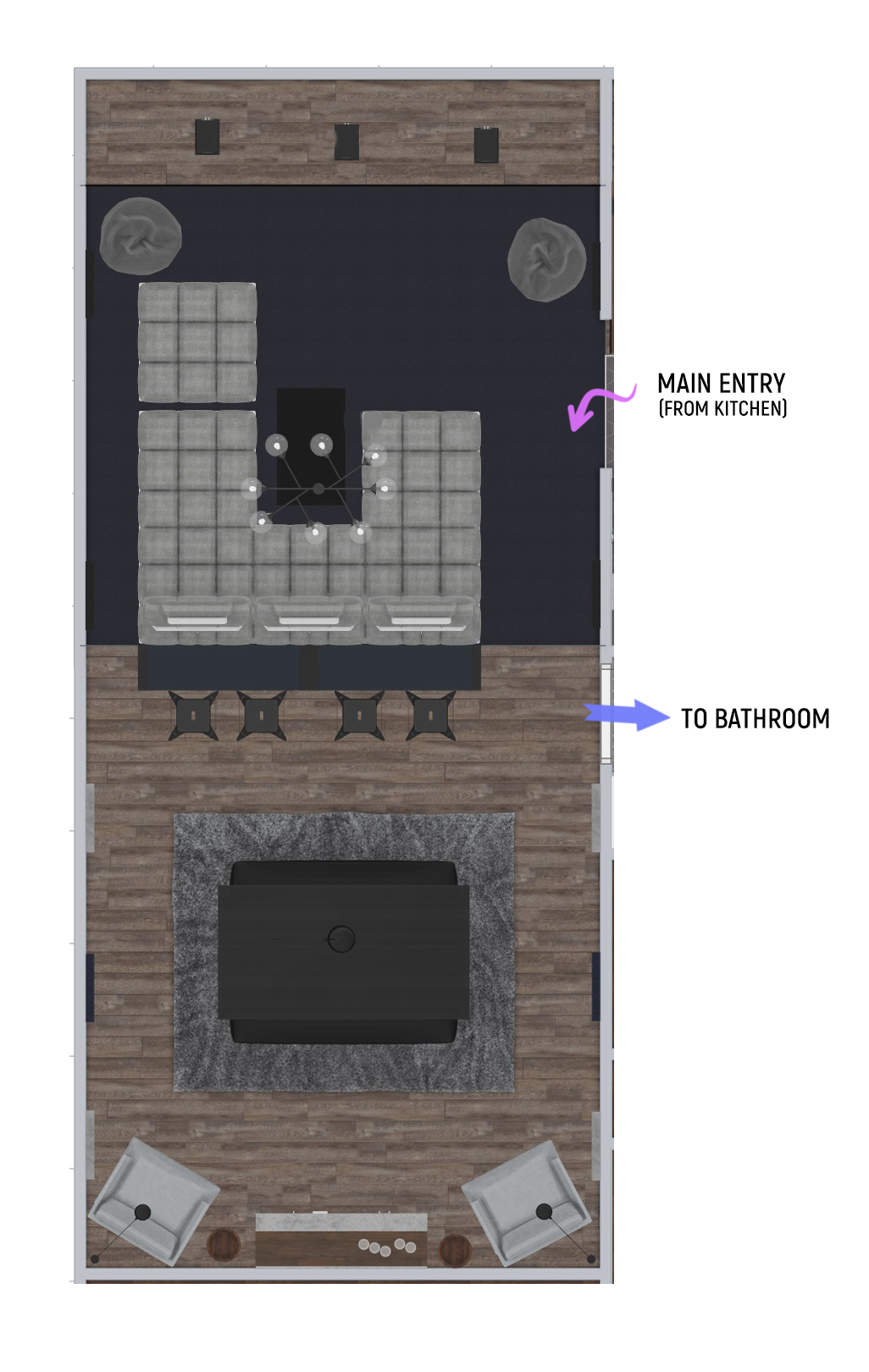 One of the first things I said I wanted when thinking about this was an acoustically transparent screen. The other thing I want is an UST projector. These are must-haves for me. I've left 3' behind the screen wall for LCR, subs, AV rack, and absorption...because absorption is required back there, right?

The next 13' after the screen is "theater," totally blacked out (only made the floor gray so some of the components stand out better), with super plush sectional seating (que angry groans from recliner purists), bean bags, and coffee/side tables.

The following 18' from there is "lounge," with pub counter/stools behind the sectional seating, the aforementioned table, and bar/sitting area.

Time for a pee break.

I've been reading about HT for a long time but never thought I'd have to take any of the sonic theory seriously since I've been in an apartment with my current setup. There's no sound absorption except haphazardly spaced Sonic Barrier pieces from Dayton, the subs are ginormous and placed for conveninece rather than function, my center speaker currently is a heckin' JBL 580 laying on its side for crying out loud! I know better, but that doesn't do much good in this space. But now that I can actually design something and do it somewhat-correctly, I want to make sure I do it right-ish. 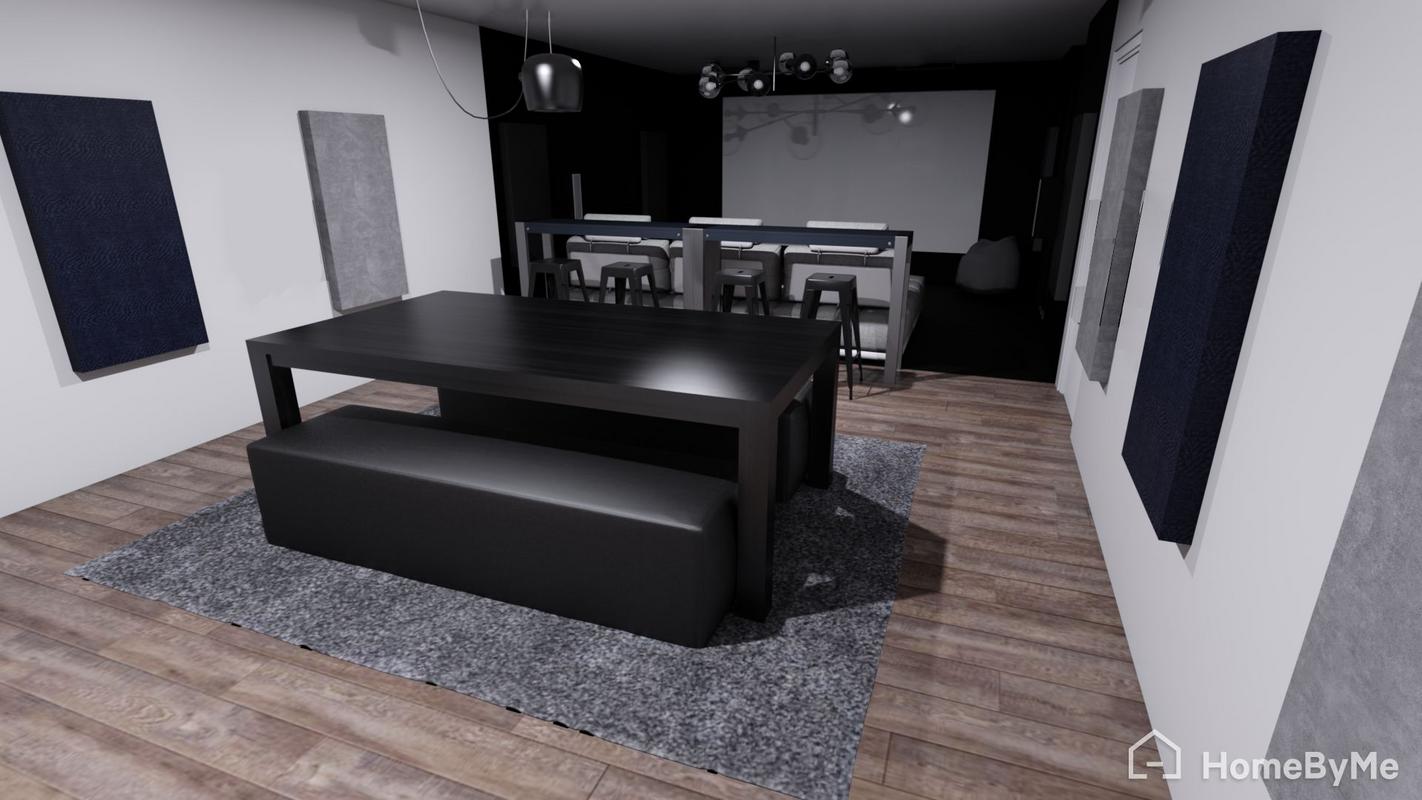 I plan to make my own sound panels. There are 5 on each side wall (2 black in front portion, then gray/blue/gray towards the back). These were placed with mostly aesthetics in mind at the moment. The whole room is going to be laid with laminate most likely, but I will cover the front half where the seating is in black medium-pile carpet. Walls and ceiling will be painted black (currently experimenting with Black 3.0 on small scale but not really liking the results). I don't want to do velvet on the side walls or ceiling, but will absolutely consider it for the screen wall, which will just be simple 2x4 construction - nothing permanently fixed to the room. 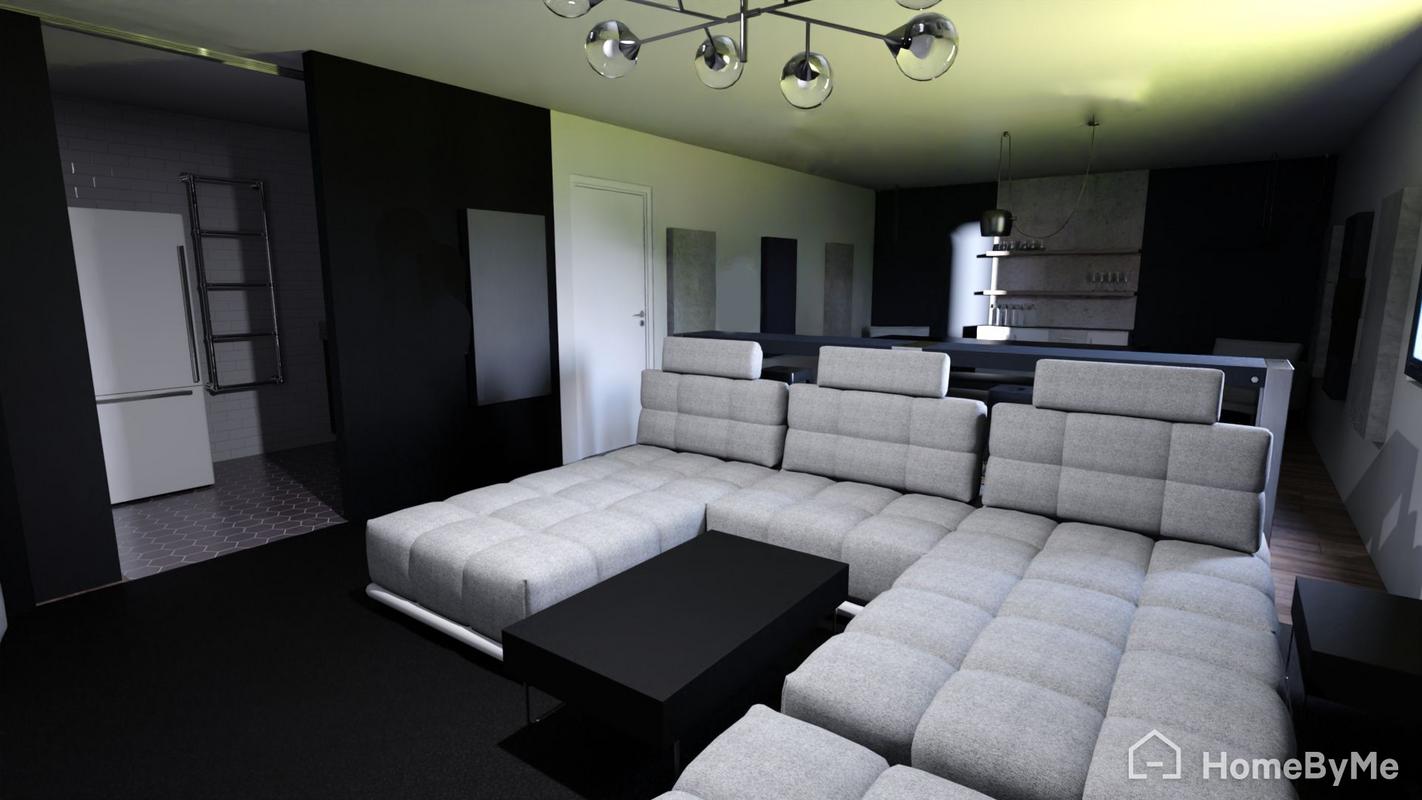 The main entry to the space is going to be from a small kitchen. I want to install a sliding "barn" door in the kitchen that seperates the two areas - black on the theater-facing side and brown on the other. This will likely not have any sound absorption qualities applied to it except for maybe some velvet. The bathroom door will likely be a standard solid-core door, nothing too robust. The whole idea here is that it can be a flexible entertainment space for parties (if we can even still have those eventually), but also serve as a semi-serious movie watching enviornment when it's just me and the SO.

Also, and perhaps the most perplexing thing, is that all of this has to be temporary and removable. We're not going to double-drywall anything, I'm not planning on fishing any wire through the walls (hence UST vs standard projection), the carpet will be temporarily laid over the laminate...we were thinking resell potential for this whole thing. It's an old, very unique house with weird additions that we are working both with and around, and should we decide not to stay here, the space has to be easily converted back to a standard living area. 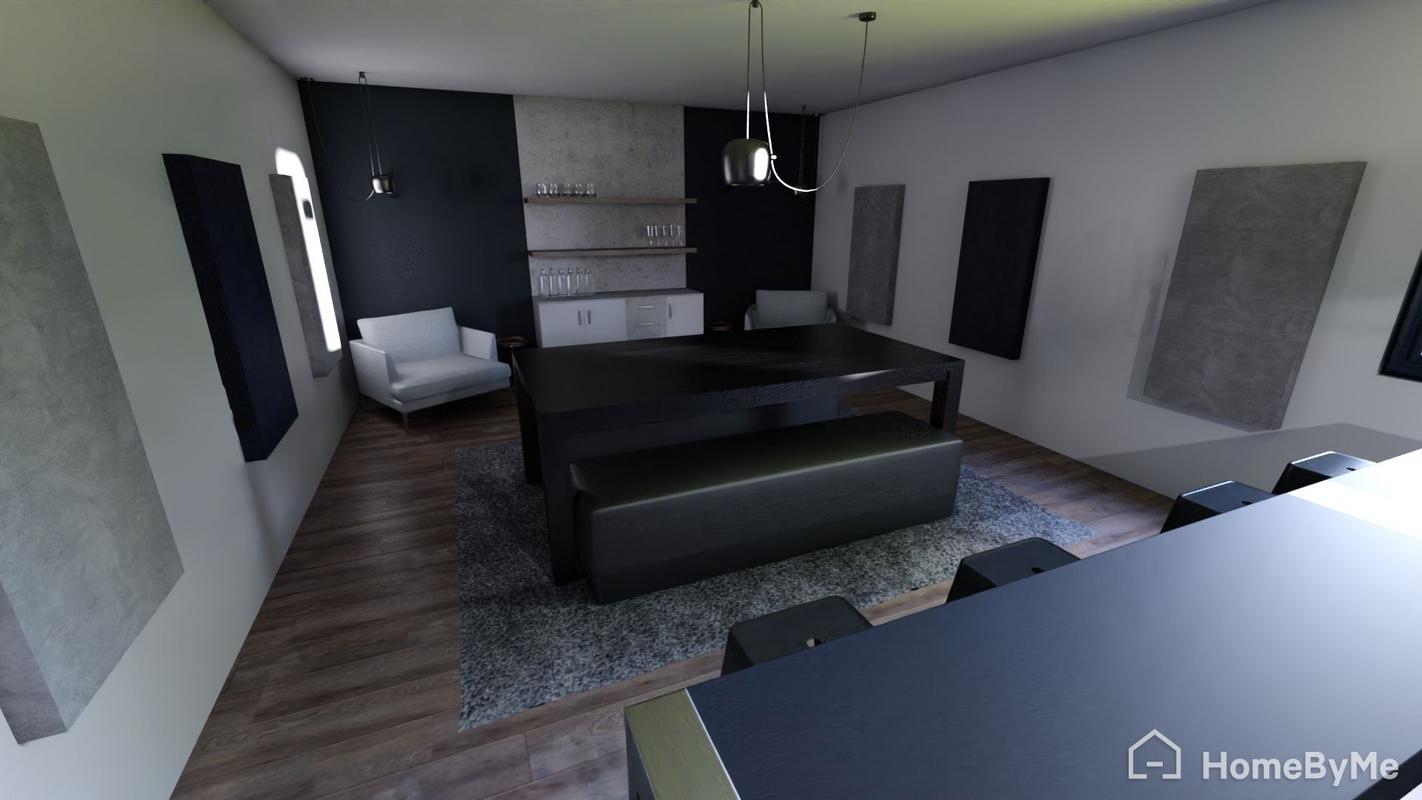 The biggest issue I know I have as of this posting is speaker and sub placement. I can say right now that I will very likely not be following any Dolby Atmos specs for placement as the room design probably doesn't allow it. Please advise me if there's a way to do all of this and still be up to spec! Do I need 9 speakers in the bed layer? Probably not. But I already have the speakers - I started stocking up when the line went on sale last year in hopes of future-proofing for the eventual "dedicated" space. Based on what I've drawn up, where would be the ideal places to have surrounds installed?

As for the subs, the main place I see fit for them is behind the screen and nearfield behind the sofa. Of course I realize this is entirely room-dependent, but I'm going for more general advice based on what I've designed. Do I need more enclosures behind the screen?

Here's a 360 degree picture that shows a speaker layout I put in while designing, but removed them from the layout for the pictures above.
https://home.by.me/en/media/anVR5Xt2zm9W


TL;DR: Building a flex theater with ridiculous aspirations and need help with speaker, sub and sound panel placement based on room layout.

Let's take a minute to breathe. I've posted a lot of info, most of it ranting in nature, I'm sure. I'm asking a lot, but ultimately I want you to help me "blue sky" this space based on what I've got so far. What am I doing that is just eggregiously wrong?

Your room dimensions are almost identical to my room. A thread title here is "My home theater in the works". Perhaps it may give you some ideas.
Last edited: Apr 1, 2020

filper said:
Your room dimensions are almost identical to my room. A thread title here is "My home theater in the works". Perhaps it may give you some ideas.
Click to expand...

Thanks for that - I'll check it out!
You must log in or register to reply here.