The Disney Channel has mounted several made-for-TV musicals (High School Musical, Camp Rock, Lemonade Mouth) over the last decade that drew tremendous audiences and had significant cultural impact for a time, and its latest Descendants repeated the successful format yet again drawing the largest audience of the year for a made-for-TV movie on basic cable. There are some good ideas here and some promising young talent along with one significant diva turn that steals the show, but too much of the formula is just that, and director-choreographer Kenny Ortega’s work is starting to seem awfully repetitive. 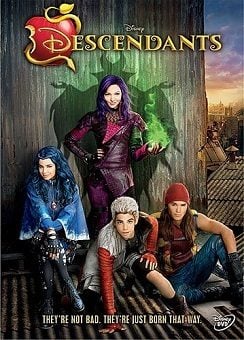 Amaray case in a slipcover

All of the evildoers from the land of fairy tales along with their offspring have been rounded up and sent to the Isle of the Lost so that the kingdom of Auradon can exist with peace and tranquility. But Prince Ben (Mitchell Hope), soon to take the reins from his father (Dan Payne), decides he wants to give the young people like himself stranded on the Isle of the Lost a chance to prove they’re not evil like their parents so four descendants are chosen for the experiment: Mal (Dove Cameron), daughter of Maleficent (Kristin Chenoweth), Evie (Sofia Carson), daughter of Snow White’s Evil Queen (Kathy Najimy), Jay (Booboo Stewart), son of Jafar (Maz Jobrani), and Carlos (Cameron Boyce), son of Cruella de Vil (Wendy Raquel Robinson). They’re evil, of course, just like their parents, and Mal is instructed by her mother to steal the wand from Cinderella’s Fairy Godmother (Melanie Paxson) which will break the spell that's keeping the evil ones stranded on the Isle. But once the four arrive at Auradon Prep School and learn the joys of doing good, working together, and being part of a team, their negative attitudes about the place and the people start to change. Mal even falls for Ben and thus further feels pressure from both sides to do something: evil for her mother or good to justify Ben’s faith in her.

Josie McGibbon and Sara Parriott’s script is pretty conventional with the positive lure of Auradon affecting the four teens almost from the moment they arrive though the writers stubbornly keep trying to snap the foursome back to their dark ways that plays havoc with the continuity from scene to scene. They’ve also made poor decisions on the placement of musical numbers jettisoning prime opportunities for intimate ballads (Carlos previously petrified of dogs melting under the spell of the campus mutt, for example) for larger, more generic big numbers (like Ben’s victory declaration “Did I Mention?” the raucous opening number “Rotten to the Core,” or the climactic “Set It Off”) that are a lot of noise and jumpy movements but offering little that’s tuneful or memorably impactful. Additionally, to keep things real for the pre-teens who are the primary target audience for this, they’ve made some of the young princesses like Sleeping Beauty’s daughter Audrey (Sarah Jeffery) into stereotypical mean girls while making others like Mulan’s daughter Lonnie (Dianne Doan) and the Fairy Godmother’s daughter Jane (Brenna D'Amico) preoccupied with superficial beauty rather than delving into the real ways people can be thought of as beautiful. The musical score is by a grab-bag of writers rather than one from a single, unified source, and that’s possibly why there is such a chock-a-block feel to the numbers, especially since director Kenny Ortega stages everything as if it’s on a proscenium stage with the camera angles providing the visual variety (what little there is). And let’s don’t even talk about the miserable hip-hop version of the classic “Be Our Guest” that’s used for the Prince’s coronation sequence.

The five young stars handle what they’re given to do quite well: Booboo Stewart has the most charisma of the leading male cast but is given the least to do in the finished product while Mitchell Hope as Ben hides his natural British accent well but pretty much spends the movie smiling broadly without digging particularly deeply for emotions. Of the girls, Dove Cameron and newcomer Sofia Carson are just fine as Mal and Evie, and it is to the writers’ credit that they pair off Evie not with the handsome Chad Charming (Jedidiah Goodacre), son of Cinderella, but with the more average looking but sweet Doug (Zachary Gibson), the son of Dopey. Of course trouncing them all is one of Broadway’s current reigning divas Kristin Chenoweth as Maleficent who acts circles around the rest of the cast in her showy role and gets a genuine Broadway composer Andrew Lippa for her showstopper “Don’t You Want to Be Evil?” Kathy Najimy, Maz Jobrani, and Wendy Raquel Robinson as her adult cohorts play their roles for laughs and seem about as wicked as a trio of creampuffs.

The movie is presented in its widescreen television aspect ratio of 1.78:1 and is anamorphically enhanced for widescreen televisions. Why Disney chose to release their film only on DVD rather than in high definition to better capture the look of the televised production is a mystery, but the standard definition transfer is more than adequate with pleasing sharpness that is not, however, outstanding (do these young performers really need glamour photography at their ages or is the transfer a trifle soft?). Color is vivid and nicely presented with no blooming, and black levels for nighttime scenes are rich and inky. The movie has been divided into 16 chapters.

Matching the quality of the cable broadcast, the Dolby Digital 5.1 sound mix does right by the film’s musical program offering a wide soundstage for the instrumentation while the voices remain rooted to the center channel. On a TV budget, there aren’t a great deal of sweeping atmospheric effects that use the split surrounds to astounding effect, but the few that are present (Maleficent swirling around once she regains her powers) are certainly competently conceived and executed.

#Mal (4:30): a succession of Twitter/Instagram messaging between the leading characters in the story.

Descendants: Wicked World (0:19): a very brief sneak peek at a series of animated shorts coming to the Disney Channel in the fall.

It’s very disappointing that Disney chose to release their newest musical TV-film only on DVD rather than on Blu-ray (one supposes that a Blu-ray may come later as it did with High School Musical if sales numbers suggest it). Still, for the young set, Descendants is a decent piece of entertainment that merely lacks the freshness and variety that might have made it a more memorable piece for all ages rather than just for the young.

Disney has a knack for coming up with wonderful concepts but putting the wrong people in charge of their execution. Case in point: this. It could have been SO good if it had been done with the same budget/target audience as Once Upon a Time. And since Andrew Lippa wrote a song for Kristin Chenoweth, why didn't they just ask him to write a complete score?
You must log in or register to reply here.