I haven't been posting because New York's Capital Region got walloped on Wednesday with a catastrophic thunderstorm with 90 mph winds coming from an unusual direction. My neighborhood looked like a tornado had gone through it. Fortunately no trees went through the building I live in, but I lost power with over 200,000 other people Wednesday afternoon, and only got power back this evening.

But fortunately, Netflix allows you to download content to your device for offline viewing, and since DS9 is only 480i it was the ideal choice to load onto my phone.

During the power outage I watched:

Hey Adam, great write up of The Visitor. I assume you have not seen the entire series yet?

Way of the Warrior:

Yeah, Paramount and Berman forced those changes on DS9 creative to juice the ratings. They weren't happy about it. But it does work out, both in our reality and in the show's reality.

Nelson Au said:
Hey Adam, great write up of The Visitor. I assume you have not seen the entire series yet?
Click to expand...

Nope. Other than the occasional episode I caught flipping channels back when it originally aired, this is my first time.

Hi Adam, ok. I had a comment about The Visitor that I won’t make as you have not seen the entire series. It’s not a big plot point.

I saw Hippocratic Oath and Indiscretion. I strongly remember seeing those episodes on broadcast night. Both had very good and important character moments. I’d forgotten the revelation in Indiscretion was this early In the season. Both really good episodes. I’ll be interested in seeing your impressions Adam.

I liked that in Hippocratic Oath, we see that Bashir realizes that maybe he could really help those Jem‘Hadar with the dependence on the White. He is so into his work and the potential benefit, that O’Brien sees that his friend has lost sight of reality. The Jem’Hadar were bred to be what they are and they can’t change. The leader of the Jem’Hadar who got off the addiction was likely a mutation as the others could not adapt without the White. So I thought O’Brien did what he had to do to escape.

Indiscretion was a great episode as we see the humanity of Dukat and Kira, they are no longer enemies and see each other as just people. Even though Kira will never see Dukat as a friend, she at least is not seeing him as the enemy. It’s true that Dukat has a thing for Kira! He definitely is oozing that vibe.

The revelation of Tora Ziyal is an interesting addition to the storyline.

Its a big step. That was a great B story!

Adam Lenhardt said:
I also think Gene Roddenberry would have hated this episode, in particular.
Click to expand...

He also hated TNG's "Family". He had his fair share of bad (wrong) ideas. For an iconoclast he sure could be stubborn.

I remember when Rejoined was close to airing, there was a story on Entertainment Tonight covering the episode because of a controversial aspect. But they missed the point. To be fair, they didn’t see the episode yet and only focused on one aspect. It is a good episode that explores a side of Trill society.

Starship Down is a fun episode but I don‘t want to give anything away to Adam. Little Green Men is a very fun episode. Lots of great homages to TOS and sci-fi movies.

This evening I watched:

Those are three great back-to-back episodes. DS9 season 4 is like TNG season 3 - a show at the top of its game. Fortunately, for DS9, it keeps getting better.

"Do you mind rubbing my ears? They still hurt."

Nog's appreciation of humans was nice. Also, there's a callback to when Sisko, et al... went back to 21st century Earth.

I enjoyed The Sword of Kahless and Our Man Bashir.

i had not seen the Sword of Kahless for some time. So it was good to see again as I had forgotten the effect of the search and then having the sword in their hands had on Kor and Worf. They both became so consumed by it that they lost their senses. And it was great to see John Colicos back as Kor. It was great the dialogue included him uttering the Glorious.

Our Man Bashir was a lot of fun and so totally out there. A James Bond homage done on Star Trek was such an unusual combination and two of my favorite franchises. They really nailed it with each of the character attributes. Dr. Noah was a great name and fit his evil plans. And I like the way Garek just wasn’t having any of it! It’s too bad MGM put the brakes on them from doing more of those. I seem to recall there are at least one or two more times we revisit the world of Julian Bashir, secret agent until Vic Fontaine.

This was fun to watch, right before jumping into the 3rd season premiere of Discovery.

With my Discovery rewatch completed, I'm back to DS9. Last night was The Way of the Warrior, a great double episode, and a sort of "second pilot" (as it was called at the time). This one, of course, introduced Worf, and the episode is very Worf-centric, but the cast need not have worried as the writers handled adding Worf to the crew with grace. Unlike Seven of Nine on Voyager, Worf does not dominate the show.

This episode had unparalleled visual effects for Star Trek, and a broad canvass. There's great stuff with all of the cast, even members that don't have much to do, like Quark (who still steals every scene he is in). I enjoyed the first three seasons and there are moments of excellence in each of them, but this is the moment where the show picks up and never slows down. Seasons 4-7 of DS9 are probably the most consistent any of the shows have ever been.

Sam Favate said:
...the writers handled adding Worf to the crew with grace. Unlike Seven of Nine on Voyager, Worf does not dominate the show.
Click to expand...

Nor does he look as good in a catsuit and heels.

The Obsolete Man said:
Nor does he look as good in a catsuit and heels.
Click to expand...

To be fair, they never tried.

I pressed on with my viewings of Home Front, Paradise Lost and Crossfire.

I had not seen Home Front and Paradise Lost in some time. I did see them during initial airings. It’s been so long that I forgot the events in the second half. It was a good twist to the plan.

Crossfire, I remember too. But it was an odd one, I figure they are setting things up for what happens later. I won’t spoil it for Adam.

A couple days ago I watched:

Last night I was watching The Visitor - one of my favorite episodes of any Star Trek - and I'm about halfway through and the &%$#@&! power goes out (in the whole town; transformer blew). So, now I am faced with whether to watch the entire episode again tonight, or just the second half.

Anyway, take this with a grain of salt, but this is the second report I have seen in two weeks that says CBS is considering some kind of DS9 revival. Does anyone know the veracity of the site Geekosity? I've never heard of them, but that's where the rumor originates. I would like it to be true, but that doesn't mean it is and I'm skeptical. For one thing, Brooks is retired. I doubt very much he'd want to participate, especially after he turned down a chance to be in the DS9 documentary two years ago. Also, after his somewhat erratic appearance in William Shatner's The Captains documentary, would CBS want to build a show around him? 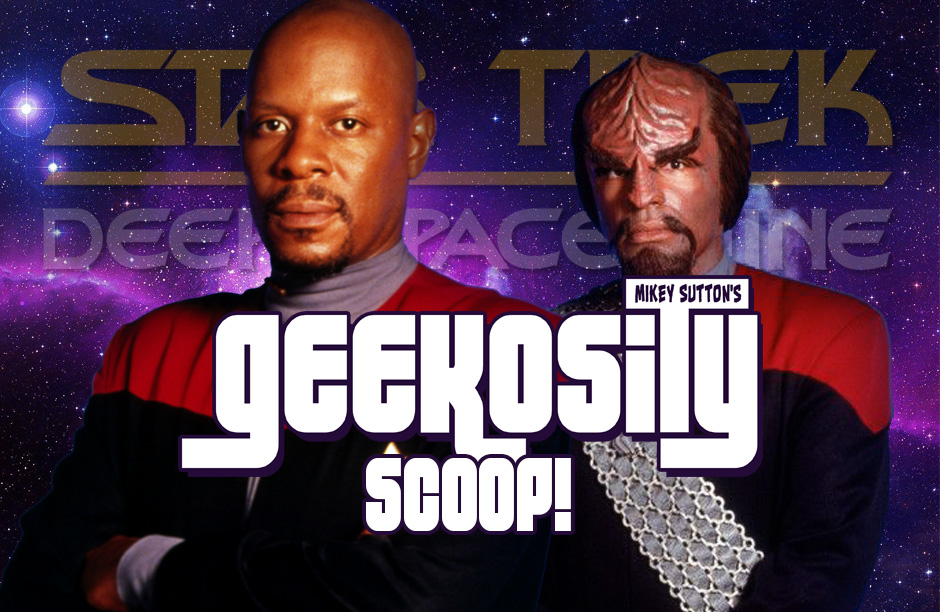 It's a bunch of know nothing nobodies trying to get nerd cred by predicting bullshit that will never come true. Then, they play telephone between their loser sites with these rumors, and the only proof any of them has is the initial article that is, well, bullshit to begin with.

So, don't believe any of the rumors until a real site reports them (which none have done in the week this story has been out there). And if they do come true in this case... Ugh. Ruining beloved characters again? Cant't the NuTrek usual gang of idiots do anything that doesn't require dragging in an established character to destroy?
You must log in or register to reply here.

The first of 2 trips to the Kennedy Space Center