In addition to a steady stream of dramas and westerns during the 1960s, James Stewart would return to family comedies from time to time and usually score pretty well. Henry Koster’s Dear Brigitte was pretty much the last of this type of family sitcom he tackled during his movie career though he would do a television series with similar rhythms in the early 1970s. Fox Cinema Archives has released a sterling DVD-R version of the film, one of its atypical first-rate jobs on one of their Cinemascope holdings, and it’s a total pleasure to view. 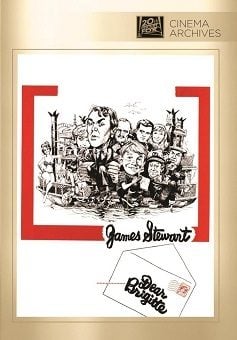 American poetry professor Robert Leaf (James Stewart) has grown increasingly despondent over the growing university trend to eliminate arts programs and replace them with science courses. He himself is a complete advocate for the arts playing chamber music with his family on their houseboat each night and doing everything he can to thwart the growing tide to denigrate the arts. His eight-year old son Erasmus, however, is proving to be the black sheep of the family with a tin ear and a tendency toward color blindness that makes becoming an artist rather difficult. Leaf is further dismayed when his son proves to be a mathematical whiz kid, able to do complex calculations in his head that are faster than even the campus computer. When he gets wind of the kid’s genius, Dr. Peregrine Upjohn (John Williams) concocts a scheme to use Ras’ special talent to be able to tout horses at the racetrack and make a fortune, disguising what he’s doing by convincing the gullible Professor Leaf that all of the monies won are being channeled into a non-profit account for arts scholarships for needy college students.

For such a simple story, screenwriter Hal Kanter has thrown in a couple of completely unnecessary subplots just to extend the film’s running time. For the title (which refers to French sex bomb Brigitte Bardot), Kanter pens Erasmus to have an insatiable crush on the French movie star, writing her amorous letters and eventually getting a sweet one in return which allows Robert and Ras to take a quick trip to France to meet her in person (Bardot looks beautiful, but it’s a subplot that could easily have been jettisoned). Even less interesting is installing Ed Wynn as the Captain, a character who breaks the fourth wall and talks directly to the audience (referencing Tom Jones as a film that also used this motif) but who actually serves no purpose except for one running gag of his flicking his burned pipe tobacco onto his dog who ever afterwards runs for cover whenever he lights up. Henry Koster helms the show with his customary smoothness allowing Stewart to overdo the absent-minded professor stuff a little bit and as always using the wide Cinemascope screen intelligently by placing several characters across its width. But things wrap up almost too quickly, and conflicts which one might suppose would be sticky wickets for Stewart and his clan are never even problematic.

James Stewart’s character is more befuddled than ever as the poetry professor (we see one of his typical lectures which isn’t about poetry at all but yet another rant about the increasing emphasis on sciences at the expense of the arts), but his loving camaraderie with his children and wife Glynis Johns (fairly wasted here) is wonderful to see. Perfectly cast as the brainy child, Billy Mumy (who often played similar parts as a guest star on various television shows of the period and on his own series Lost in Space) is always a pleasure, one of the most memorable child stars of the era. John Williams is also perfect casting as the earnest charlatan Peregrine Upjohn. Working in concert with crooked Jesse White (good as always in a small but stereotypical role), Williams is great playing a bounder masquerading as a gentleman. Jack Kruschen plays Ras’ child psychologist in another subplot without much point, and Fabian and Cindy Carol play the teen lovebirds in forgettable roles. In a tiny role, the always terrific Alice Pearce is a helpful unemployment office clerk, and look closely and you’ll spy a very young James Brolin as a member of Professor Leaf’s poetry class.

Eureka! Fox Cinema Archives has given us a Cinemascope film transfer with the correct aspect ratio (2.35:1) and has anamorphically enhanced it for widescreen televisions! It’s a generally gorgeous transfer with excellent sharpness (except when Stewart is favored with some softer focused photography) and very strong color with very delectable skin tones. Some red curtains are so richly colored that they bloom just a bit, but otherwise the transfer is first-rate on all counts including very good black levels. The movie has been divided into chapters every ten minutes so this transfer has 10 chapters.

The Dolby Digital 2.0 sound mix is decoded by Dolby Prologic into the center channel. Though it’s slightly louder in volume than is necessary, it’s not as prone to distortion as other earlier releases in this series. Fidelity is strong in this mono mix with dialogue, the delightful George Duning music, and the sound effects sharing the track with no interference problems. No age-related artifacts mar the listening experience either.

Not the best available James Stewart comedy, but Dear Brigitte is still a most pleasant way to spend a little more than ninety minutes. Finally, Fox Cinema Archives has done a terrific job with a Cinemascope transfer (there are a few others, but they can basically be counted on the fingers of one’s hands) giving one hope that future releases will likewise be shown some of the care and respect that Dear Brigitte has been offered.

Thanks for the review . I can now buy this dvd . I was hoping for a decent print . This sounds even better than i hoped for . Not a great film but ,like all Stewart films , enjoyable .

Just an FYI, this is available on a region-free blu-ray here: http://www.amazon.de/Geliebte-Brigitte-Blu-ray-James-Stewart/dp/B005IQ1OV0/ 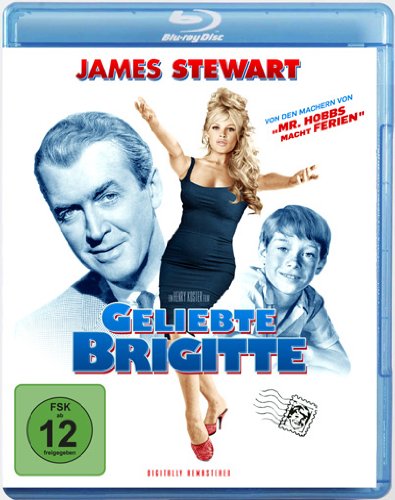 And that's really the only reason why Fox's own DVD-R looks this good, because they're cribbing from a print already used on a superior format in Europe. Why Fox didn't just release this one state's side on Blu-ray is another mystery we'll leave to executive logic...or lack thereof!

I always liked this movie when I was younger, perhaps it is a title Twilight Time will release to BLU.

This is one of the only remaining American movies of my grandfather that was not previously available on DVD. I'll look into picking this up as soon as I return to Los Angeles. For the record, there are five others that remain unavailable. One of those, Spring Parade, will most likely never be released.


I too pine for Twilight Time to release more of his work on Blu-ray, but I respect their choices and their priorities. Given that they've already released several of his films on disc, I feel I should stand clear of their work and enjoy what they bring us.

Kevin EK said:
This is one of the only remaining American movies of my grandfather that was not previously available on DVD. I'll look into picking this up as soon as I return to Los Angeles. For the record, there are five others that remain unavailable. One of those, Spring Parade, will most likely never be released.
Click to expand...

Thanks to YouTube, I was finally able to see Spring Parade where the movie is present in its entirety and in a not bad print. It was the only Deanna Durbin movie I had never seen, so I'll be forever grateful that someone put it up there for viewing.
You must log in or register to reply here.