There is a serial killer on the loose at the Ballet Russe in Greydon Clark’s Dance Macabre. What might have been a decent thriller along the lines of Dressed to Kill with a better script, more deceptive direction, and a less individualistic leading man instead morphs into a predictable, by-the-numbers slasher with a lack of blood for those who are gore-addicted and a lack of surprise for everyone else. This one’s pretty much a waste of time for all but the most dedicated fans of its star. 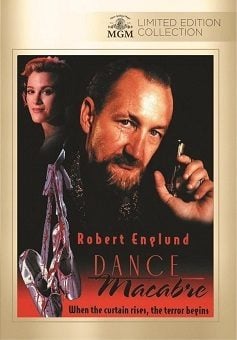 [Though I have attempted mightily to avoid spoilers in the film’s description and critique, certain revelations are still fairly obvious for those who have not seen the film, so the reader is advised to skip this section if he wants a chance to make certain discoveries on his own.]

Not interested in studying classical dance in order to become a prima ballerina, American Jessica Anderson (Michelle Zeitlin) is forced by her father (the film’s writer-director Greydon Clark) to enroll in a St. Petersburg master dance class that has opened its doors to students from outside the Soviet Union. Anthony Wager (Robert Englund), the troupe’s master choreographer, and his crippled lover and former prima ballerina Svetlana both see enormous potential in her (he also sees a younger version of Svetlana incarnate in Jessica), and she agrees to try although the competition is fierce, not only from her French roommate Claudine (Nina Goldman) but also from British prankster Angela (Julene Renee) and German pillhead Ingrid (Marianna Moen). One by one, each of Jessica’s stiffest competitors either go missing or die horrible deaths, but Jessica is too enraptured by Russian photojournalist Alexander Petrov (Alexander Sergeyev) to notice their demises. Is someone clearing the way for Jessica or are the deaths simply a series of coincidences?

Writer-director Greydon Clark stumbles almost from the outset by giving us too close and lengthy a look at the crippled Svetlana tipping his hand to the film’s big surprise ending long before even the murders begin. There are some rather feeble attempts at planting red herrings through the film (Alexander dresses in black as the killer seems to and ballet mistress Olga (Irina Davidoff) blows hot and cold on her charges during the film giving her motive for wanting to bump off the less-than-disciplined girls in her charge), but they really don’t fool anyone, and the make-up job on Svetlana isn’t nearly a thick enough disguise to deceive anyone. As for the direction, the murders aren’t photographed very well with Claudine’s drowning badly staged and Angela’s hanging impossible not to have drawn attention from the other people on stage when it occurs. Plot holes abound as the murderer couldn’t possibly accomplish the crimes without drawing attention to the events in progress, and the climactic revelation of several of the missing bodies stored away for safe keeping echoes the body dumps from the Friday the 13thfilms once the remaining teens begin to stumble over their deceased friends. In a desperate attempt to add some other interest to the movie, there is a sex scene between Jessica and Alex with the director having actress Michelle Zeitlin thrust her bosoms up into the camera on a couple of occasions, but it still comes off as completely non-erotic.

Obviously meant to offer actor Robert Englund the same kind of virtuoso acting challenge that dual roles always offer ambitious performers, the film lets down its leading man since the director’s lack of finesse doesn’t lead to an effective build-up to a great revelation. Michelle Zeitlin has some obvious skills as a ballet dancer (nothing that would prompt any astonishment from trained dancers, however), but her principal worth is in portraying an American who is far more interested in physical pleasures than in the hard-driving discipline of a dance company. Irina Davidoff seems more like the real thing as the exacting ballet mistress, and Alexander Sergeyev isn’t very convincing as a photojournalist and doesn’t share much chemistry with leading lady Michelle Zeitlin.

The film is presented in its theatrical 1.85:1 aspect ratio and is anamorphically enhanced for widescreen televisions. Sharpness is just fine apart from long shots and the usual soft focus glamour photography for the leading lady. Color isn’t especially vibrant and even appears a little dated, but flesh tones are natural enough. Black levels are only average, and there is a fair amount of dust and dirt that crops up throughout the presentation. The film has been divided into chapters every ten minutes, so this film has 10 chapters.

The Dolby Digital 2.0 stereo sound mix is aggressively stereophonic with the music (a collection of classical tunes and some original background score by Dan Slider) sometimes a bit overpowering. Dialogue has been generally well recorded and except for a few instances is mixed harmoniously with the music and the atmospheric effects. There are no age-related artifacts like hiss or crackle that intrude on the presentation.

There are no bonus features for this made-on-demand disc.

Fans of Robert Englund may be glad that Dance Macabre has finally been afforded a DVD release even in a made-on-demand program, but the film really doesn’t do him justice (it was a designed as a follow-up to his version of The Phantom of the Opera, another disappointment for him). At least the MOD disc gives a decent accounting for the movie such as it is.