Perhaps it was inevitable that Dan Curtis, the creator of Dark Shadows, would produce his own version of Bram Stoker's Dracula. Jack Palance (Shane) stars as the Count in a screenplay by acclaimed fantasy/sci-fi author Richard Matheson (Twilight Zone, I Am Legend). Filmed on location in Yugoslavia and England, Dracula was scheduled to air on network television on October 10, 1973, which was pre-empted by a television address by President Richard Nixon concerning the resignation of Vice President Agnew. Dracula ultimately premiered on network television on February 8, 1974, and was released theatrically as well. 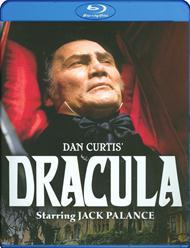 Jonathan Harker(Murray Brown) arrives at Castle Dracula unaware that he will go from being a guest to a prisoner. Before long, Dr. Van Helsing(Nigel Davenport) will be summoned by Harker to root out the vampire. Count Dracula(Jack Palance) uses Harker's connections to travel to England, where he seeks the reincarnation of his lost love from centuries past.If this premise seems similar to Dark Shadows, it is no coincidence since director Dan Curtis was the creator of vampire Barnabas Collins. Dan Curtis' Dracula was the first version of Dracula to use reincarnated love as a motivation for the Lord of the Undead, just as it was for Barnabas Collins, and it has been borrowed for many more recent versions of the Dracula legend.Bram Stoker's Dracula was the original title of this film, but it has been retitled for home video releases as Dan Curtis' Dracula to highlight the contribution by the creator of Dark Shadows, and distinguish it from other films using Bram Stoker's name in the title.Jack Palance is cast well as Count Dracula with his angular Slavic features and his dramatic delivery. The screenplay by Richard Matheson(I Am Legend, The Twilight Zone) is fairly faithful to the original novel, with the additional MacGuffin of one of Dracula's victims being the reincarnation of his lost love. Palance and Matheson were not new to collaborating with Dan Curtis. Palance had previously played the lead role in The Strange Case of Dr. Jekyll and Mr. Hyde, a 1968 TV film produced by Curtis. Matheson had been a screenwriter on both pilot films of Kolchak the Night Stalker, The Night Stalker(1972)and The Night Strangler(1973), both of which were produced by Curtis(with the latter film directed by him as well).The intensity of Palance, combined with atmospheric cinematography by Oswald Morris(The Guns of Navarone) and an original score composed by Robert Cobert(Dark Shadows) create a mood of horror and suspense that must have been unusual for network television in 1974. For the quality of talent on screen and behind the scenes, my expectations may have been unreasonably high for this film. I cannot say that Dan Curtis' Dracula is my favorite version of this legend, but it is certainly one of the best. It is not surprising that this film saw theatrical release since its quality surpasses most TV movies of the era. Some footage was considered too explicit for network television at the time, but this alternate footage, replaced on network television, was included in the theatrical release. The version released now on Blu-ray is the theatrical version, with the alternate footage included in the special features on this release.

Dan Curtis' Dracula is presented in 1080p in its original theatrical aspect ratio of 1.78:1. The staging of direction and placement of titles indicate that this was filmed with an open matte so that additional space must have been visible at the top and bottom of the screen in its television premiere.This transfer was taken from a 2K restoration of the original 35mm negative. Video quality is excellent as expected with good fine detail and what appears to be accurate color timing. Grain is usually apparent and has not been scrubbed out digitally at the cost of fine detail. Blacks are solid, perhaps a little too solid, since shadow detail is not quite what one would expect in a transfer from the original camera negative, although this may be attributable to the film stock. There is some minus density but the picture is nearly pristine overall with little if any dirt and debris visible.

The English soundtrack is presented in 2.0 DTS-HD MA. Other options are French and Spanish Dolby Digital 1.0. The English audio is more than adequate, with no audible hiss or popping that other TV films from the 1970s can exhibit. This is a very good sound mix with dialogue always appropriately audible with the film score coming in strong without interfering with dialogue.

All of the special features are presented in 1.78:1 aspect ratio in 1080p, with the exception of the Jack Palance and Dan Curtis interviews which were videotaped.Interview with actor Jack Palance(3:57): This fascinating but brief interview is in 1.33:1 aspect ratio in SD. The interview seems to have been filmed in the mid 1990s.Interview with producer/director Dan Curtis(4:23): This interview was apparently filmed in the mid 1990s around the same time as the Jack Palance interview, and is also presented in 1.33:1 aspect ratio in SD.Outtakes(6:28): These outtakes are presented in 1080p in the same aspect ratio as the feature(1.78:1). There is no audio on the footage, however, the score composed by Robert Cobert plays over the footage.TV Cuts(3:41): This feature presents clips of the theatrical version, followed in turn by the tamer versions that complied with network standards and practices in the 1970s. The theatrical version is tame by today's standards, and there is not much difference between the two versions. The TV versions have less blood, but it is interesting to see the differences between the theatrical and television network versions. Original Trailer(2:51): This theatrical trailer shows looks very nice for all of the dirt and debris apparent on video, and helps the viewer appreciate the high quality of the restoration footage in the feature-length version.

Dan Curtis' Dracula aka Bram Stoker's Dracula(1973) is a suspenseful and atmospheric version of the Dracula legend which benefits from the performances by Jack Palance and the other actors, location shooting, and the quality of talent on screen and off. This reviewer is a fan of Dark Shadows so I expected that this film might become my favorite version of the Dracula story; I cannot say that is the case, however, this is certainly among the better versions of this legend, and is noteworthy for its original contribution to the legend, adopted by later versions, with the titular character on a quest to regain lost love through reincarnation. The video and audio presentation are almost everything one might hope for, as are the special features, which are all recommended viewing. Anyone who is a fan of Dracula, Dark Shadows, or vampires in general is certain to enjoy Dan Curtis' Dracula.

An interesting sidebar to this: in the early 70‘s, before this film was made, Marvel comics began a comic book version of Dracula called Tomb of Dracula. It involved a resurrected Dracula in modern times with a descendent of Van Helsing among others trying to re-stake him (the character of Blade was introduced in this comic). The creators of the comic based the look of Dracula on Jack Palance, whom they felt had a good look for the Count. Dan Curtis obviously agreed when he cast Palance in the role.
You must log in or register to reply here.