The fourth entry in CBS’ lucrative CSI franchise leaves the world of physical forensic evidence and dives deeply into the world of device hacking, a world of cybernetics where rules don’t apply and rogue programmers have a field day causing all kinds of disruptions and destruction. CSI: Cyber certainly introduces the viewer to the dangers present in the world of the everyday devices which we all take for granted (smart phones, computers, game consoles, and the like), and some of the scenarios are eye-openers as to the cavalier manner in which most of us today deal with our personal information, but the show often has logic loopholes that are cavernous with writing that is not up to the best that the franchise offered in its previous three incarnations. 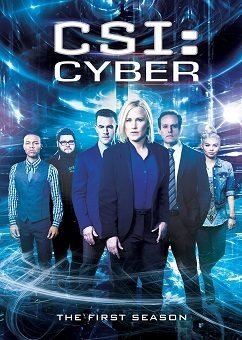 Amaray case with leaves in a slipcase

Psychologist Avery Ryan (Patricia Arquette) had her computer hacked and her successful New York practice destroyed when the personal details of her client sessions were spread over the internet. Now attached to the Cyber division of the FBI in Washington, Avery has collected a group of hackers to assist her bringing down those who use their programming knowledge for destructive purposes. These include talented programmer Daniel Krumitz (Charley Koontz) and two former “Black Hat” hackers Avery has brought from the “Dark Side” to make amends for their former malignant ways: Raven Ramirez (Hayley Kiyoko) who excels in dealing with social media and Brody Nelson (Shad Moss) who is doing penance here rather than serving a prison term for his dangerously illegal coding. Special Agent Elijah Mundo (James Van Der Beek) does most of the heavy lifting for the team during investigations and making arrests, and Assistant FBI Director Simon Sifter (Peter MacNicol) supervises the team while having precious little knowledge himself about the ins and outs of hacking.

On the plus side, the program in its first thirteen episodes introduces us to a plethora of hacking terms which are standard vocabulary for living in this world. We get to know about phishing, zero day, crowdsourcing, hospitality hacks, spoofing, juice jacking, power grid hacks, botnets, game transfer phenomena, bitcoin bounty hunters, and remote access trojans. These terms come into play as the team investigates such crimes as a kidnapping accomplishing through hacking a baby monitor, an arson started by remotely frying printers, death caused by a runaway roller coaster whose fail safes were controlled by a computer program, robbery of a half million dollars’ worth of bitcoins held in a single computer, and social media being used for cyber bullying. During the course of the season, Avery must confront one of her failures: a “Black Hat” hacker whom she had tried to reform but who now strikes back from prison and, in the season finale, finally comes face-to-face with the hacker who had destroyed her therapist practice whom she has been trailing for four years. On the negative side, proper police procedure isn’t often followed as the team goes to investigate suspects (not covering all paths of escape leads to a ludicrous number of chases), and one must allow the show a great deal of dramatic license as the characters zip from Washington to points all over the country (even if they do have their own private jet) to handle time sensitive cases when it’s obvious that no means of transportation could operate that quickly and efficiently.

Fans of the CSI franchise will be completely familiar with the look and feel of the series. If anything, the use of computer graphics and the high tech gloss to the proceedings supersedes anything found in the franchises based in Las Vegas, Miami, and New York, and the young members of the cast all seem quite at home in this electronic world appearing completely proficient and comfortable in portraying computer programmers with strikingly complex skills. But Oscar and Emmy winner Patricia Arquette takes quite a few episodes before she begins to seem comfortable with all of the computer-speak and the now-standard walk-and-talk format of the franchise, her early episodes finding her a bit stiff and emotionally detached from what’s going on around her. Later in the season, she becomes much more emotionally available and becomes a much more appealing focus for the series. James Van Der Beek is appealing as the FBI agent who provides most of the muscle for the team (and has more than above average computer skills in the field when needed), but Peter MacNicol is basically wasted in his supervisory capacity role and is not returning for season two.

Here are the thirteen episodes that appear on four discs in the season one set:

The program is broadcast on CBS in 1080i, and these downconverted 480p transfers (1.78:1 aspect ratio) look just fine for standard definition material. Sharpness is the major sticking point with these programs as the glamor photography and many shots in rooms with low light levels reduce the crispness of the image quality appreciably. Otherwise, there is a decent amount of detail that can be seen in hair and facial features. Color is strong and well managed, and skin tones are very life-like. Contrast is generally quite pleasingly applied while black levels are excellent. Each episode has been divided into 6 chapters.

The Dolby Digital 5.1 sound mix (there is a 2.0 stereo surround mix also available) matches the extremely active and very busy sound design of the network broadcasts. Dialogue has been well recorded and has been placed in the center channel. The background music plays a major role in the surround presence of the mix while split atmospheric effects from ringing telephones in the lab through gunshots and street sounds all get more than decent placement through the soundstage.

“Kitty”: the backdoor pilot for the series which was shown on CSI during its 2013-2014 season. There is optional commentary available from series creator/producer Anthony Zuiker.

Deleted Scenes: seventeen scenes spread through the season are attached to the episodes from which they were excised.

Audio Commentary: Creator/producer Anthony Zuiker offers commentary on an episode he wrote “Selfie 2.0” explaining the genesis for the plot, problems with filming, and identifying various background actors in the scene and their importance to him.

It Can Happen to You: Season 1 of CSI: Cyber (22:57): Executive producers Craig O’Neill and Pam Veasey along with the entire cast of regulars introduce the concept of the series, talk about their characters, and mention the most memorable moments from the first season.

Welcome to CTOC (7:01): Production designer Vaughn Edwards gives us a tour through the various sets used by the series and explains his design esthetic for the sets in this world.

Encoding CSI: Cyber (11:56): Producers Carol Mendelsohn, Ann Donahue, Anthony Zuiker, and Pam Veasey describe cyber psychologist Mary Aiken on whom the character of Avery Ryan was based and then discuss how her work was adapted into the gist for this series. Patricia Arquette and other members of the cast also comment.

CGI: Cyber (11:53): special effects coordinator Brad Powell and producer Pam Veasey comment on how they wanted to graphically depict going under the covers of all the electronic devices we use in our everyday lives.

Tech Tools of the Trade (6:31): props master Leonard Hancock gives us a tour of his department showing off the many gadgets used to make the series come alive.

Launch Promos (4:16): a series of five promos CBS aired prior to the show’s premiere.

CSI: Cyber will be returning for a second season this fall moving to the Sundays at 10 p.m. timeslot formerly occupied by its mothership CSI (which is ending its run with a TV-movie). There is some appeal to this depiction of the new world of cyber crime as it plugs into CBS’ reliable stable of entertaining procedurals, but one hopes the weaknesses displayed in season one will be attended to so the series can measure up to the quality which the original series once attained.