Fans of TV's Community may recognize Richard Erdman, who plays Dick Powell's apparent savior in this film noir, as Leonard the elderly community college student in a younger day. Cry Danger is a crackling film noir that benefits from location shooting of downtown Los Angeles circa 1950, and the kind of snappy dialogue that elevates films in this genre. 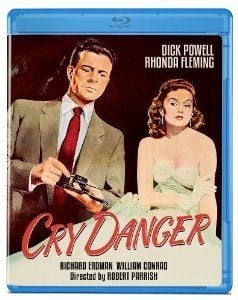 Rocky(Dick Powell) has just been released from prison thanks to Delong(Richard Erdman), a marine veteran who hopes that Rocky will be generous with his loot, unrecovered by the police, after Rocky is released from prison due to an alibi fabricated by Delong.Unfortunately for Delong, Rocky is innocent, and has no idea about the location of the money from the bank job for which he was wrongly convicted. Rhonda Fleming(Gunfight at the O.K. Corral, Inferno) plays Nancy, Rocky's old flame who is married now to his friend Danny, who is still in prison for the bank job. William Conrad (TV's Cannon) plays Castro, a gangster who may be responsible for the frame job. Character actress Kathleen Freeman also has a small role. (Although you may not know her by name, you probably recognize her face, as she is one of the most prolific actors of film and television in the 20th Century. This can be confirmed by checking out her IMDB listing, which includes everything from The Naked City through The Lucy Show, The Man from U.N.C.L.E., and Shrek.)Cry Danger is a first rate film noir with twists and turns of plot and snappy dialogue thanks to wordsmith and screenwriter William Bowers(The Mob, The Gunfighter). Cry Danger was directed by former film editor Robert Parrish(Saddle the Wind, The Mob) and is his first directing credit. The cinematographer for this film was Joseph F. Biroc, whose credits also include It's A Wonderful Life, Bwana Devil, Blazing Saddles, and Airplane!.Cry Danger also benefits from the location shooting in the Bunker Hill area of Los Angeles and other locations in the downtown area. This film noir enjoys a considerably higher degree of verisimilitude than other films from the same era that remained on the studio lot. It is surprising that this excellent film produced by RKO has apparently never been released before on DVD, or even VHS, in North America. Anyone who enjoyed Dick Powell's turn as Philip Marlowe in Murder, My Sweet will find much to enjoy in Cry Danger. The cast, the screenplay, the actors, all combine to make Cry Danger an entertaining and memorable film.

Cry Danger is presented on Blu-ray in its original 1.37:1 aspect ratio. This transfer was made from the restoration performed by the UCLA Film & Television Archive. It is unfortunate that so many RKO films have had their original elements allowed to deteriorate more than necessary over the years. Thankfully, the restoration of this film has served it well. Initially, the print seems to lack contrast, but that resolves itself during the opening credits. Grain is present but it is never distracting, merely appropriate to the appearance of film. Black levels are solid with good grays and shadow detail and excellent fine detail. Some scratches and blemishes still remain, but these are very minimal and are not so pervasive as to distract from the presentation.

The audio is presented in mono English DTS-HD MA. For being a mono track from a film produced in 1950, I cannot imagine this film sounding any better. There is no audible hiss or crackling, and dialogue and soundtrack seem to have a dynamic range that can rival some stereo presentations. As with the video presentation, there are no defects that distract from the presentation.

There are no special features in this edition.

Cry Danger is an exemplary film noir. It features a terrific cast of actors, real L.A. locations circa 1950, plot twists and snappy dialogue. It is inconceivable that this film has never been released before on VHS or DVD in North America, and wonderful that the UCLA Film & Television Archive have restored this film thanks to funding by the Film Noir Foundation. Kudos to Olive Films for rescuing films like this from obscurity by releasing them at long last. The film looks great in high definition, especially considering the probable condition of the original elements, and the audio presentation is very good as well.Cry Danger is highly recommended to fans of film noir, and to everyone else who enjoys a high quality film.

I'm happy to hear that this looks pretty good. My copy arrived yesterday but I haven't had a chance to watch it yet.

I watched Cry Danger this evening, and I agree with Tim's assessment. The picture quality is as good as one could hope for from Olive, and the story keeps you guessing about what will happen next. I'm very glad to have this in my collection.

Jean Porter, who plays trailer park girl Darlene, was married to the famous director Edward Dmytryk for 50 years and she celebrated her 91st birthday in December. I believe that she and Richard Erdman are the only members of the cast who are still alive.

Very nice BD transfer of one of my favorite noirs. Olive continues to do very fine work.

Yeah, I have to watch my BD this week. Too many discs to watch and not enough time to watch them all.

I watched my Blu of it this past Saturday night. I've seen the film before, and it holds up terrifically, one of the most solid and fun films noir out there, and it looks just fine.

Oh, and Powell's co-star, Rhonda Fleming, one of the most beautiful and capable actresses of the 1950s (or ever, really), and noir's top redhead, is also still among the living.

And the 40s. Rhonda Fleming played a femme fatale in Out of the Past, where she was "cold around the heart".

Peter M Fitzgerald said:
Oh, and Powell's co-star, Rhonda Fleming, one of the most beautiful and capable actresses of the 1950s (or ever, really), and noir's top redhead, is also still among the living.
Click to expand...

Yes, I forgot about her still being with us.

Robert Crawford said:
Yeah, I have to watch my BD this week. Too many discs to watch and not enough time to watch them all.
Click to expand...

I never got around to watching this Blu-ray, but will rectify that mistake in the next couple of days. Thanks to Pitfall, I'm in a Dick Powell film noir type of mood.

Love the Richard Erdman character (Delong) in this movie...

I love this film too, but just never got around to watching this Blu-ray. Will do so now as I've been watching a lot of film noir lately.

I viewed this Blu-ray release today and was very pleased with it. The only thing missing was an Eddie Muller commentary. Bowers was good with Westerns, but he was also proficient with Film Noir dialogue. An excellent script doctor with much of his work uncredited.
You must log in or register to reply here.