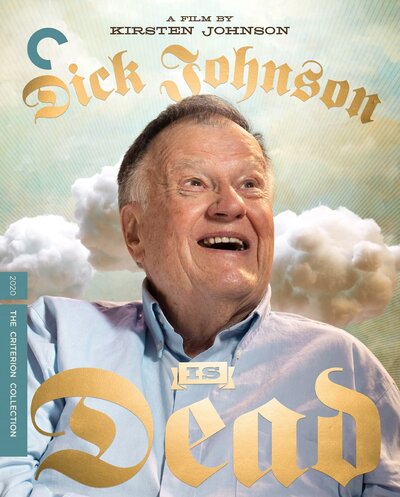 ​
This playful, profound, and immensely moving docu-fantasia by Kirsten Johnson is a valentine to the director’s beloved father, Dick Johnson, made as she has begun to face the reality of losing him to dementia. Using the language of cinema both to defy death and to confront it head-on, Johnson mischievously envisions an array of ways in which the man she loves most in the world might die, staging a series of alternately darkly comic and colorfully imaginative tableaux interwoven with raw vérité footage capturing the pair’s tender but increasingly fragile bond. Tackling taboo questions of aging, mortality, and grief with subversive humor and surprising grace, Dick Johnson Is Dead is ultimately a triumphant celebration of life, and of the gentle, funny, unforgettable man at its center. Long live Dick Johnson.

Can't believe there is zero interest on this forum for this masterpiece - it has a rare 100% rating on Rotten Tomatoes from more than 90 critics!

A filmmaker and her elderly father stage his death in various ways to help them face his inevitable demise.

I received both the 4k UHD of The Piano, as well as this blu-ray today and this is the one I'm going to see first. I saw Kirsten Johnson's previous documentary Cameraperson (also released by Criterion) last year and was very impressed by her talent. That film also featured her father, who is Dick Johnson. It's available on Netflix - but the blu-ray has a good selection of extras, which justify the purchase.

This is a fantastic documentary. Kirsten Johnson not only imbues the subject with a lot of heart, it's downright hilarious at times.

After watching this remarkable film again and noticing how much better the picture quality on the blu-ray is, compared to the Netflix streamed version, I listened to the commentary. It's rare for Criterion to release a disc with a newly recorded commentary these days and this is a really good one, such as the ones they used to make in the old days of laserdisc, with several participants. In addition, there is an fascinating supplement with the sound designer Pete Horner. Now working for Skywalker Sound, he learned his craft under the tutelage of Walter Murch at Zoetrope. He talks us through a few scenes, showing how he added sound to even the most mundane scenes, to convey the feeling the director wanted the audience to experience.
You must log in or register to reply here.