One gets the impression that the suits at NBC never had a lot of faith in the Don Rickles program CPO Sharkey. It began its two-season run as a mid-season replacement in December, 1976 and it was not even on the network's schedule when the Fall 1977 season began. However, a spinoff from Sanford and Son called Sanford Arms proved to be a ratings disaster and it was cancelled after five weeks. Into the breach came the second and final season of CPO Sharkey, a very funny service comedy which holds up very well today. All 22 episodes of Season Two have now been released on DVD by Time-Life. 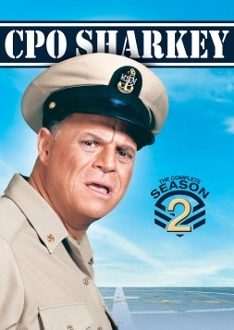 I have a special affinity for CPO Sharkey, because a decade before its debut I was in Navy Boot Camp at Great Lakes, Illinois. Our Company Commander was a First Class Boilermaker (BR1) named J.E. Young who had been in the Navy for nearly 30 years. One day we were practicing the Manual of Arms (look it up if you don't know what it is) and a somewhat chubby recruit named Bill was having trouble getting the hang of it. BR1 Young looked at him disdainfully and then exploded with exasperation. "Boy," he shouted, "you may look like Charlie Tuna now, but you're gonna look like Charlie Atlas by the time I get through with you." It was the sort of thing that Chief Sharkey (Don Rickles) might have said.

The action in CPO Sharkey takes place at the now-defunct Naval Training Center in San Diego, a considerably warmer location than Great Lakes. Most of the original cast returns for Season Two, the most notable exception being that Captain Quinlan (Elizabeth Allen) has been transferred and her replacement is the hardline "old Navy" Captain Buckner (Richard X. Slattery). Sharkey, who was never entirely comfortable with having a female Commanding Officer, is initially thrilled when he learns that Captain Buckner is taking over, but the new C.O. proves to be a no-nonsense adversary. Also returning for the second season are Sharkey's black counterpart Chief Robinson (Harrison Page), and Lieutenant Whipple (Jonathan Daly), their annoying immediate superior. Sharkey's extremely tall and goofy aide, Seaman Pruitt (Peter Isacksen), is still around, as well as most of the original company of recruits.

Guest stars in Season Two include Steve Franken, Betty Thomas, Pat Carroll, and Richard Libertini. Don Rickles is in his element as the acerbic Chief with a heart of gold. Richard X. Slattery was one of those prolific character actors whose face was more recognizable than his name. A former New York City police officer, for many years he played Murph the gas station owner in Union 76 commercials. Here he is perfectly cast as the gruff Captain Buckner.

The 22 episodes in Season Two are spread over three dual-layer discs. Discs One and Two each contain eight episodes; Disc Three contains six episodes and a featurette.

As you can see, several of the episode titles are plays on the names of films, and one hilarious scene on a submarine had to have been inspired by the stateroom scene in the Marx Brothers classic A Night at the Opera. From my own personal experience, I only wish that real boot camp had been as much fun as CPO Sharkey.

CPO Sharkey was one of many 1970s television shows which were shot on videotape. The original tapes must have been kept in better condition than other shows of the era, because the picture quality is generally pretty good, with just a few blips here and there. There is an advisory which states "Due to the age and nature of the film elements, you may notice occasional flaws in the image and sound quality. Wherever possible, we have sought out and restored the original materials to ensure the best possible quality."

The programs are in color and they are properly framed at 1.33:1. The colors are not as strong as would likely have been the case if the show had been filmed.

The mono Dolby Digital 2.0 audio is nothing special but is adequate. The dialogue is clear and understandable, and there is occasionally some punch when loud noises are heard. The music is free of distortion. There are no subtitles.

The only extra on this DVD set is a delightful 20-minute reunion of Don Rickles with cast members Harrison Page, David Landsberg (Recruit Skolnick), Tom Ruben (Recruit Kowalski), and Barry Pearl (Recruit Mignone) in Las Vegas in April, 2015. They have a good time reminiscing about making the show, including the time Johnny Carson made an unannounced visit on the set. The reunion took place a couple of weeks before Rickles' 89th birthday.

Your enjoyment of CPO Sharkey will likely depend upon how you feel about Don Rickles. If you like his humor you should love this show. If, on the other hand, he is not your cup of tea, you probably should give it a pass.

I love the show, and I am thrilled that Time-Life saw fit to bring the entire series to DVD

Nice review, Rich. I was in the Army but the service is the service in many respects. I enjoyed the two releases as well. It's interesting how the episode "Sharkey and the South American Way" is essentially a remake of the Gomer Pyle episode "Wild Bull of the Pampas". Larry Storch played the part in the Gomer show. The Sharkey episode even uses some of the same jokes such as the meaning of the medals on the visitor's uniform, and the proposed mutiny against Sharkey is also similar. I guess this had to do with Aaron Ruben being part of both series and he thought it was a good plot to repeat. Very funny in any event.
You must log in or register to reply here.

Yesterday at 10:20 PM
The Obsolete Man