Well, fall is nearly upon us and that means one thing (among many others) - CORN MAZE! For those not familar with this, it's simply a maze laid out in a corn field. The corn is planted in the spring in the form of the maze and when the field has matured in the fall, people are allowed in (for a fee!) to try and figure it out. It's a gas, at least to me.
These have become quite popular in my area. There are five, or maybe six, mazes less than an hours drive from my home. Originally they were started to supplement the farmers income when corn prices hit rock bottom a few years ago. It doesn't take much time or investment to create or to run a maze, and the farmer gets to harvest the field at the end of the season.
I went through my first corn maze several years ago. The theme was a T-Rex and it was very well done. The following year it was the Titanic, which was even more frustrating. It's one thing to figure out a path by looking at a map (if you cheat) and quite another doing it when you're in the midst of corn rows that all look pretty much alike. After a while, you can get a general idea of how the thing is laid out, but that still doesn't prevent you from taking dead ends or going around in circles. Eventually, you must come out. If it was a difficult maze, you feel victorious; if it was an easy one, you feel cheated. Either way, you've wasted a couple hours and, basically, accomplished nothing, but I've done that many times.
Anyone else?
------------------
They're coming to take me away, ha-haaa!!
They're coming to take me away, ho-ho, hee-hee, ha-haaa To the funny farm. Where life is beautiful all the time and I'll be happy to see those nice young men in their clean white coats and they're coming to take me away, ha-haaa!!!!!
- Napoleon XIV
[Edited last by alan halvorson on September 19, 2001 at 05:53 PM]

I love these things! So does my wife, they've always got some around here('bama). Looking forward to this fall season more than usual for some reason, this just makes me anticipate it more. Thanks a lot!

The Amazing Maize Maze!
I just went to my first corn maze a week ago. I was surprised at the sophistication of it, despite being in a corn field. The maze was fairly elaborate, and had several stations scattered throughout where you could collect pieces to fill in a map of the maze. There where some wooden bridges, trivia questions, a phone booth to call for a hint, and more. You were also timed, in case you were racing to complete it quickly.
It was a good couple of hours of fun with a couple of friends.

Man, I've been wanting to try our local corn maze for a couple of years now. It's only a couple miles from my house. I'm going for sure this year. When it gets closer to Halloween, they "haunt" the maze with hired goblins. I think I'll wait until then, sounds like more fun...
------------------
-Ryan (http://www.ryanwright.com )
Before you criticize someone, walk a mile in their shoes.
That way, when you do criticize them, you'll be a mile away and you'll have their shoes.

Brent:
Auburn Ag. department did a pretty nice one this year right b the girl's dorms

I went through it before the Ol Miss game. Dunno how long it is supposed to be up, but worth checking out.
p.s.
Just in case my GF sees this post the

Just went to one here in Omaha last week.

Joel,
Take the interstate through Council Bluffs like you're goin to K.C. About 10 miles after you pass the casinos, and you're on the way to K.C., just look on the right side of the road. They have some signs posted. Also, if you're a man of adult video it's right next to ROMANTIX adult video store. Hope this helps

Heck, in the winter with the snow, so they get a gimpy Jack Nicholson to chase the maze goers with an axe?

Sounds like lots of fun, I guess I'll check around here.
LL cool B 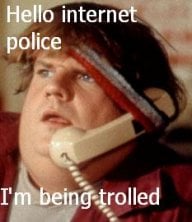