Continuum Season Two presents the second season of the low-budget Canadian science fiction series on Blu-ray in the best manner possible. The picture and sound quality are both quite good, and the basic quality of the writing seems to be a little improved from the initial season. The series idea is roughly the same as the 1990s sci-fi series Time Trax – a cop in the future is transported to the present along with a group of terrorists, and must hunt them down before they can do damage or change history. For the second season of Continuum, the writers have tried to add several layers of complexity to the initial plot, sometimes adding some interest and sometimes adding confusion. 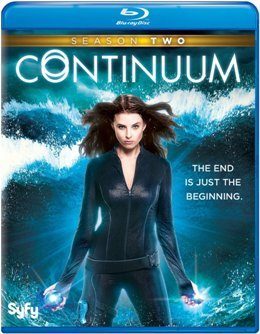 Continuum: Season Two is presented in a 1080p AVC transfer that accurately presents the HD imaging captured on the show. As with the first season’s blu-ray set, detail and color range are strong, black levels look solid, and the occasional moments of high end CGI are relatively seamless.

Continuum: Season Two is presented in an English DTS-HD Master Audio 5.1 mix that mostly focuses on the front channels. Like the mix for the first season, this one has a satisfying amount of life in the surrounds, particularly during bigger action sequences or the CGI moments of the pilot. The subwoofer does get a little bit of life when things go boom.

There’s actually a fairly generous spread of special features this for the second season set. First, there’s the eleven episode commentaries I have broken down with the episodes. The third disc adds over an hour of featurette material.Continuum: Behind the Scenes (1:13:51 Total, 1080p) – This is a collection of thirteen featurettes about the making of the series, covering everything from casting to stunts to visual effects. Some of the material gets a bit too cute for its own good, but there’s a strong sense that the cast is very comfortable while being interviewed in a variety of situations. The featurettes can be viewed on an individual basis or via a “Play All” option.Subtitles are available in English for the episodes and the featurette. As with the first season, standard chapter menus are not exactly included here – instead, each episode is itself a chapter. There are chapters within each episode, but they are not itemized in a menu – which means you may have to hunt through an episode if you stop the disc and restart it later.

Continuum: Season Two is continuing to gather confidence and assurance as it expands its story from the basics established in the first season. The cast is appealing and clearly up for the challenge of making this premise believable, and there are certainly many more complications to the story this year. It’s just that there really isn’t much more to this premise than you can see on the surface, and adding side issues doesn’t solve the basic problem. The Blu-ray set offers the series in solid picture and sound, along with a much nicer extras package than the first season. The real issue is whether the casual viewer will be interested enough to take the trip.