Images of Zoidberg and Futurama

Never knew such a beast exists! I thought the Giant Squid was the rare one.

Its eight arms and two tentacles have up to 25 teeth-like hooks -- deeply rooted into muscle and able to rotate 360 degrees -- as well as the usual suckers to ensure fish do not escape.

The hooks not only hold fish for the squid's two parrot-like beaks, but also are used to fend off attacks from hungry sperm whales.

Come to think about it, what would they call the next squid that they find that are bigger than both the giant one and the collosal one? The Superhumongous Squid?

I don't think I'd like to meet such a creature, those hooks do sound quite viscious.

If this squid is ever caught, there would be a glut of calamari on world markets. Not that I'd mind cheap and abundant calamari...

(And for all you "Fishing with John" fans out there...)

Someone should tell John Lurie and Dennis Hopper. They're probably still wandering around the Andaman Sea.

My vote would be for "Big ass squid"...
I wonder what else is swimming around down there in the dark, waiting for some poor sucker to discover it.

why'd they kill it?

why'd they kill it?

I think it simply died in the nets before it was pulled onto the boat.
Click to expand...

I think it simply died in the nets before it was pulled onto the boat.

As these creatures live in the deep sea, I'm sure the change in pressure killed it. One reason why it would be very difficult to capture one alive.

If you'd like to know more about these creatures, check out The Search for the Giant Squid: The Biology and Mythology of the World's Most Elusive Sea Creature by Richard Ellis. A very interesting read.
Click to expand...

Let's not forget folks. It was a young one. So imagine what a full-grown one looks like.

Giant squid (architeuthis dux) live in the deep sea thousands of meters down. The reason they are so rarely found is that only the sick/injured ones ever float to the surface. So by the time they are found they are either dead or almost dead.

This must be one of the largest squid ever discovered. The largest so far was 59ft, though often parts of the body are missing, particularly the tentacles, and they simply have to estimate the original size. There have been reports of much larger ones and some scientists say they can reach a length of, at the very outside, 150-200ft.

The legendary battles between giant squid and sperm whales diving for food are factual. Many a sperm whale has been caught with dinner plate sized sucker marks on their bodies. One of the main staples of the sperm whale is squid, though I think they sometimes bite off a little more than they can chew (no pun intended).

In the water these creatures have incredible strength. Certainly one of the most fearsome creatures on the planet, at least in the minds of human beings.

I also recommend "The Search for the Giant Squid" and "Monsters of the Sea" by Richard Ellis. Exellent books.

"The hooks not only hold fish for the squid's two parrot-like beaks, but also are used to fend off attacks from hungry sperm whales."

A few years ago someone had actually shot footage of a Giant Squid/Sperm Whale war. Going at it and fighting each other.

A friend had seen it on TV and told me about it. It always killed me I never got to check it out:frowning:
J

This creature they found is nota giant squid, it's in fact a different species which has a much larger body than the Giant Squid.

The body of the colossal squid is much bigger than the giant squid, which can weigh up to 900 kg, 2,000 pounds when fully grown. A giant squid's tentacles can be up to 13 meters long, compared with five meters on the recovered creature.

No word on the tentacle length, besides the one they recovered had 5 meter tenticles..

Someone should tell John Lurie and Dennis Hopper.

This story was on TV here a few days ago. They had a closeup of the rotating hooks being swivelled; it was amazing stuff and looked like something Stan Winston might produce.

They held a giant squid beak against the colossal's and the colossal beak must have been five times the size. The scientist interviewed said that anyone caught by the squid would be ripped to pieces within seconds.

one thing to note that the fish they said it was eating, the Patagonian Toothfish is better known to restaurant goers as Chilean Sea Bass (a moniker given to it after fishermen realized noone wanted to eat "toothfish" for dinner). I hear they are quite nasty looking and are in danger due to overfishing. 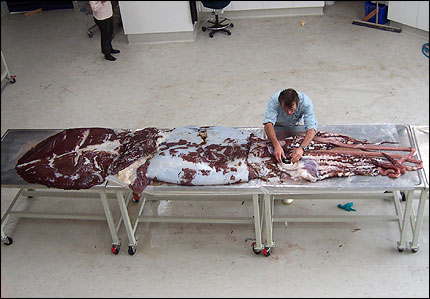 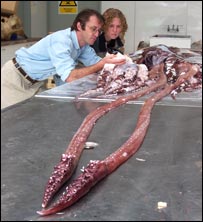 Paths Of Glory - on DVD