CITIZENFOUR, the winner of the 2014 Academy Award for Best Documentary Feature, is a fascinating look at the story of whistleblower (or traitor, if you prefer) Edward Snowden and how he connected with Pulitzer Prize-winning journalist Glenn Greenwald. Snowden, as you probably know, released to Greenwald numerous classified documents which revealed the extent of the National Security Agency's electronic surveillance of United States citizens. The release of this excellent Blu-ray is particularly timely in view of the New York Times reporting on August 15, 2015 that AT&T provided the NSA with billions of domestic e-mails between 2003 and 2013. 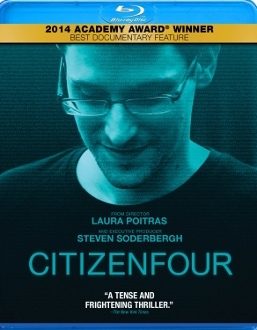 A year or so after 9/11, while trying to check in for a flight online, I was told that I had to see an agent at the airport. No reason for this was given to me. When I arrived at the airport, I had to wait while the ticket agent took my driver's license into a back room. A few minutes later she came out and issued my boarding pass to me. This scenario repeated itself several times over the next year or two. On the fourth or fifth time, a sympathetic ticket agent confided to me that I was not allowed to check in online because my name was on the government's "watchlist." She then gave me information on what I had to do in order to request that I be taken off the list. To make a long story short, I had to send proof of my identity and a certified birth certificate to Homeland Security. I never heard back from Homeland Security, but eventually I was once again allowed to check in for a flight online, and I have not had a problem since.

I had not given my experience with Homeland Security any further thought until I watched CITIZENFOUR, a riveting documentary which is directed by Laura Poitras. The film makes the case that the United States government has been engaged in massive electronic surveillance of American citizens since the passage of the infamous Patriot Act. Although the government is prohibited by law from warrantless interception of telephone calls, e-mails, text messages, etc. which take place totally within America's borders, the NSA has skirted that law by claiming that a communication is not actually "intercepted" until it is read or listened to. The government's position is that it has been free to collect and archive any and all communications without a warrant as long as no one is reading them or listening to them.

All of this came to light primarily because of Edward Snowden, a contract worker for the NSA who had a security clearance high enough for him to have access to some of this country's most sensitive secrets. I know a thing or two about security clearances because I had a Top Secret clearance while I was in the Navy during the Vietnam War. Having access to classified information was a responsibility which I took seriously.

While doing contract work for the NSA, Snowden became aware of the fact that the electronic surveillance being done in the United States went far beyond what American citizens were being told by the government. In fact, a case can be made that NSA director Keith Alexander and National Intelligence director James Clapper both lied to Congress about the extent of the surveillance. Snowden, who comes across as very articulate, sincere, and intelligent, decided that the American people deserve to know the truth about what was really going on.

In December, 2012 Snowden anonymously contacted Glenn Greenwald by e-mail, but they were unable to establish a secure method of communicating. Snowden then turned to documentary filmmaker Laura Poitras while using the code name "CITIZENFOUR." He was aware of the fact that she knew Greenwald, and he knew that she had been under government surveillance, probably because she has made films which is critical of the war in Iraq and the war on terror. Snowden and Poitras were able to exchange secure e-mails and he convinced her that he had a massive number of classified documents which spell out the extent of NSA spying on Americans. Poitras then contacted Greenwald, and Snowden agreed to meet with them in Hong Kong.

Snowden was smart enough to get out of the United States before anyone knew what he was planning to do. He told his girlfriend that he was going away on business, which was not unusual because he frequently traveled for his work. She had no inkling about what his real plans were and she had no idea that he might never be able to come home.

Poitras decided to make the documentary in the style of cinema verité, filming each meeting of Snowden and Greenwald as they unfolded. The first meeting takes place at the Mira Hotel in Hong Kong on June 3, 2013. The following day they are joined by Snowden's colleague, Ewen MacAksill of The Guardian. They waste no time and on June 4 they publish their first article, about the NSA's secret program to collect information about Verizon customers. Additional revelations are published over the course of the next three days. The articles create an international sensation, and by the fifth day Snowden allows The Guardian to reveal his identity, in part to remove suspicion from co-workers who had no part in the release of the information, and in part to hopefully inspire other whistleblowers to emulate him.

At this point Snowden's position grows precarious as he becomes concerned that the United States might be able to convince the Chinese authorities to take him into custody. Parts of the film play out like a spy novel. When a fire alarm goes off in Snowden's hotel, is it a ruse to get him out of his room? Much later, while they are in Russia, Snowden and Greenwald discuss a whistleblower by passing notes back and forth because they believe (probably accurately) that the room they are in is bugged. Greenwald is an impressive presence in the film. Some of the action takes place in Brazil, and I did not know that he is fluent in Portuguese.

When the Snowden story first broke I was appalled that any American with a Top Secret clearance would willingly and deliberately release classified information to the entire world. However, subsequent revelations and this film have caused me to reassess how I feel about what he has done. And that, I suppose, is the test of a documentary - does it make you question your preconceived notions? If that is the test, CITIZENFOUR passes with flying colors.

If I had a chance to question Edward Snowden, I would ask him if the classified documents which he took with him show why my name appeared on the government's watchlist. One thing is abundantly clear - the government has no intention of ever giving me an explanation.

CITIZENFOUR is presented in 1080p, utilizing the AVC codec, and is framed at 1.85:1 (the packaging erroneously states that it is 2.39:1). The image is consistently sharp, with strong contrast, accurate colors, and good shadow detail in the darker scenes. The footage which was shot by Laura Poitras reportedly was done digitally with a Sony NEX-FS100 camera, and it looks terrific.

The mostly English DTS HD-MA audio is excellent. English subtitles pop up whenever someone is speaking in a foreign language. Dialogue is clear and understandable, but English SDH subtitles are available. Music by Nine Inch Nails adds to the film's drama.

Bonus material on this Blu-ray disc includes three deleted scenes. Roughly ten minutes of it is Snowden being interviewed, and there is more than three minutes of Greenwald working in Brazil.

The New York Times, in conjunction with The New School, sponsored a roundtable discussion which includes Laura Poitras, Glenn Greenwald, and (by video link from Russia) Edward Snowden. The discussion is moderated by David Carr. It has a running time of one hour.

Also included is a Q&A session with Laura Poitras at Lincoln Center in New York. The running time is approximately 28 minutes.

The final extra is an "Op-Doc," a visual Op-Ed, made by Laura Poitras for The New York Times which features William Binney, a former NSA analyst who also plays a prominent part in CITIZENFOUR. He explains how much information the government can develop on individuals by looking at their e-mails and text messages, listening to phone calls, and tracking movements. After Binney became a whistleblower his home was raided at gunpoint by the F.B.I. This video has a running time of 8 1/2 minutes.

The Blu-ray disc begins with trailers for the documentaries The Hunting Ground, The Unknown Known, and The Great Invisible. These trailers play when the disc is loaded and they cannot be accessed from the main menu. However, you can skip them by pressing the Top Menu key on your remote.

CITIZENFOUR is an informative and chilling documentary which you will not soon forget. It is one of the rare films to receive a 100% "fresh" rating by the top film critics surveyed by rottentomatoes.com. Regardless of whether it changes how you fell about Edward Snowden, it is guaranteed to make you give more thought to him and what he has done.

Although for obvious reasons it could not be included in the film or the extras, it is worth nothing that as of June 2, 2015 the NSA has been prohibited from continuing its program of mass data collection from telephone companies.That information is now retained by the telephone companies and the NSA must get permission from a Federal Court to access it. We have Edward Snowden to thank (or blame) for that.