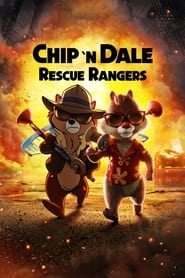 
Tagline: It's not a reboot. It's a comeback.

Plot: Chip and Dale are living amongst cartoons and humans in modern-day Los Angeles, but their lives are quite different now. It has been decades since their successful television series was canceled, and Chip has succumbed to a life of suburban domesticity as an insurance salesman. Dale, meanwhile, has had CGI surgery and works the nostalgia convention circuit, desperate to relive his glory days. When a former cast mate mysteriously disappears, Chip and Dale must repair their broken friendship and take on their Rescue Rangers detective personas once again to save their friend’s life.

They're certainly going in an interesting direction with this.

A Hasbro MLP:FIM cameo in a Disney movie? Is that Disney's next takeover target?

Certainly, taking the RR IP in a strange new direction. Worth taking a look; although, I'm no big fan of mixing live action with animation. The mix of traditional 2D with CGI animation looks interesting though.

So this takes place in the Roger Rabbit Cinematic Universe?

One detail I really liked in the crowd scenes was the animated extras of various styles interspersed randomly with the human live action extras.

Good question. The movie has an answer for that, but I won't spoil what it is.

I watched Rescue Rangers all the time growing up and used to have plushes of both Chip and Dale in their Rescue Rangers iterations, which I think I got on a Disney World trip. I stayed up to watch this as soon as it dropped on Disney+ tonight/this morning.

This movie really shouldn't work. The concept is crazy, and I wasn't sure if I was going to be okay with Chip and Dale talking like John Mulaney and Andy Samberg. The trailer felt like a big departure from the show and the characters as written on the show. But the trailer certainly got my attention, and I have to admit I was really curious. For some reason, it does work.

Because the show is treated as itself within the world of the movie, that sort of helped me to put it aside while being open to this admittedly very different take. If this was an in-universe sequel to the show where Chip and Dale suddenly sound like Mulaney and Samberg, I would probably hate it. But by walling off the show as "a show" within the universe of this movie, it allowed me to take this as sort of fan fiction in a way.

I think it's clear that the people who made this have affection for the show, and that's enough. This might not work for everyone, but it is certainly a big swing creatively. There were several times when I couldn't believe what I was watching and that this was able to be made in this way. Credit to Disney for taking a risk here and supporting a really unique vision. Disney could have gotten away with making a cookie cutter Rescue Rangers and I would probably have watched that just because I loved the show so much, but they made something distinctive, which is much more compelling. Credit also to the lawyers who hammered out contracts to make this movie possible.

If you're looking for the movie to be episode 66 of the TV show, you'll be disappointed. If you were to take the Disney character cameos as canonically connected to their movies, that would also be problematic. But taken separately as its own satirical self-contained entity, I really, really dug this. I laughed a lot and could feel myself grinning. It's a lot of fun.

This weekend was dead, they shoulda put it out in theaters. Its legitimately a winner!

Overall, the trailer looks much better than I would have expected. Not a fan of the music choice, but whatever.

I was never a huge Rescue Rangers fan, so I'm most excited by the cameos. Great to see Uncle Scrooge again - I didn't care much for the version on the recent DuckTales reboot. Now let's have a proper DuckTales film already.

I think I'm going to pass on the new RR film. I want to remember the Rescue Rangers the way they were.
--jthree

I never watched rescue rangers the show, but I'm a fan of the talents involved in the film so I watched this morning.

It was pleasantly amusing throughout, solidly written, and flew by. Several of the background jokes were pretty funny. Meh sounds kind of negative but it sums this up for me. Not bad by any stretch, not great or anything I'll need to watch again. Just kind of right in the middle.

Though I did really laugh when Chip said, "I'm in hell."

JamesSmith said:
I want to remember the Rescue Rangers the way they were.
Click to expand...

As I said in my initial post, I was a bit concerned about this too because the removal of Chip and Dale's traditional voices seemed odd to me. But nothing that they did here reflects badly on the show for me. The show exists in this movie as an entity unto itself. Therefore, this story doesn't follow it so much as pay homage to it, and I felt like it was done in an affectionate way. If you change your mind and decide to take a look, you might be surprised by the quality of the movie. I certainly was.


Lord Dalek said:
This weekend was dead, they shoulda put it out in theaters. Its legitimately a winner!
Click to expand...

I would have enjoyed watching it in theaters and would certainly have been satisfied if I paid the cost of a movie ticket to see this. I also think it could have done well. A theatrical release could certainly have heightened its profile, as we've talked about recently in other threads. But it's tricky because I also think it being on Disney+ is a value add for the streaming service. For their original movies on there to have value, they need to avoid the perception of Disney+ being where bad movies get dumped. This will go a long way toward helping that mission.

The fact that this movie is really terrific certainly reflects well on Disney and what they are capable of producing for the service. I don't remember any other Disney+ original movies getting this much attention and critical buzz. And to be clear, I'm talking here about movies that were developed and filmed specifically for Disney+. The last three Pixar films and Hamilton debuted on Disney+, but they were all originally conceived as theatrical releases and got moved there due to the pandemic. Rescue Rangers is a true homegrown win for the Disney+ movie division. It's hard to quantify precisely how much value that this film adds to Disney+ versus the value it could have had as a theatrical release. But I do think its presence on Disney+ is a good thing for that service.
Last edited: May 20, 2022

Jake, thanks for the comments. You state your opinions very well, There's a part of me that (if I watched it) would see it as episode 66 to the series, so I just can't separate it from the original show. After reading a brief synopsis, I was disappointed with a plot point. So I think I'll just pass. Might spring for the blue ray series collection in a few months.

Edwin-S said:
A Hasbro MLP:FIM cameo in a Disney movie? ?

My Little Pony: Friendship is Magic

I watched the film last night. Part of it takes place at a fictional comic/ film con. There.were.a few.cameos.from properties owned by other companies..

The film itself was made in a similar manner to."Who Framed Roger Rabbit", but with an updated list.of.pop culture references.
Last edited: May 22, 2022

JamesSmith said:
I think I'm going to pass on the new RR film. I want to remember the Rescue Rangers the way they were.
--jthree
Click to expand...

That’s too bad you’re missing out on a really funny and fun movie.

I’ve be never seen an episode of RR as these Disney cartoon type tv shows never did anything for me. I was probably a little too old when they came out.

I’d say it’s in the spirit of Roger Rabbit.

Btw what is the Inspector Gadget reference as I must have missed it?

TonyD said:
That’s too bad you’re missing out on a really funny and fun movie.

I’ve be never seen an episode of RR as these Disney cartoon type tv shows never did anything for me. I was probably a little too old when they came out.

I’d say it’s in the spirit of Roger Rabbit.

Btw what is the Inspector Gadget reference as I must have missed it?
Click to expand...

We watched most of this just because of the plethora of random characters from all kinds of old and new cartoons. Honestly I didn't even care or follow the story they were trying to tell, I was just watching for the different cartoon cartoon characters they tossed in the show. But if you are a diehard C&D lover, I doubt you will like this mess.
Movie information in first post provided by The Movie Database
You must log in or register to reply here.