The acclaimed Warner Brothers Vietnam War television series China Beach was released in a complete series set by StarVista/Time-Life last year. Devoted fans of the series had mostly nothing but praise for the set, but the hefty price tag caused potential purchasers who were not sure about the show to take pause and wait for single-season releases. Late last year StarVista/Time-Life responded by releasing China Beach Season 1 at an attractive price point. Now the single-season releases continue with China Beach Season 2. This set contains all 17 hour-long episodes - including the famous episodes "Vets" and "Tet '68" - and a number of attractive extras. 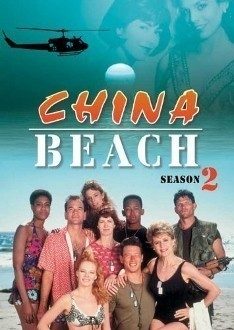 China Beach is unusual in that its pilot episode aired at the end of the 1987-1988 television season, which suggested that ABC did not have much faith the show. If so, the network's misgivings proved to be misplaced, because from the beginning China Beach was a critical success which was hailed as a masterpiece. The show's many fans had been hoping for years that it would be released on home video, but first Warner Brothers had to clear the music rights to more than 300 songs which were used in the series. While it was not possible to clear every song, the rights to an overwhelming majority were eventually obtained, which made the release of the show on DVD possible. .The setting for China Beach is the 510th Evacuation Center and R&R Center (nicknamed the "Five and Dime") near Da Nang during the height of the Vietnam War. The base is essentially a large emergency room where severely injured soldiers are stabilized before they can be evacuated for further medical treatment. Tragically, it also is where soldiers who do not survive their wounds are embalmed and put into body bags.The exceptional ensemble cast includes memorable characters such as Colleen McMurphy (Dana Delany), a nurse from Kansas whose tour of duty in Vietnam is scheduled to end during the pilot episode, but she cannot bring herself to leave as long as her services are needed so desperately. Others at China Beach are the naive Red Cross volunteer Cherry White (Nan Woods), whose primary motive for traveling to Vietnam is to find her brother, who is missing in action; U.S.O. singer Laurette Barber (Chloe Webb), who left Pennsylvania for the Far East in the hope of being discovered; and civilian worker K.C. Koloski (Marg Helgenberger). Koloski came to Vietnam voluntarily, but whatever idealism she brought with her disappeared when she discovered that there was money to be made by providing the troops with entertainment which was not sanctioned by the U.S.O. Returning male characters include Dr. Dick Richard (Robert Picardo) and Specialist 4 Sam Beckett (Michael Boatman). Beckett's primary responsibility is embalming and processing the bodies of dead soldiers, a job which makes other soldiers wary of hanging out with him. The Season Two opener, a two-part episode called "Lost and Found," introduces Wayloo Marie Holmes (Megan Gallagher), an aspiring journalist whose introduction to Vietnam involves embarrassing shrapnel wounds, and Frankie Bunsen (Nancy Giles), a private in the motor pool. Season Two also features an impressive array of guest stars. Among them are Kevin McCarthy, Dennis Farina, and Kathy Bates.Season Two debuted on November 30, 1988 and it integrated into the story lines many of the momentous events which occurred during that year, such as assassinations and race riots in the United States and the Tet Offensive. When the fighting during the Tet Offensive reaches China Beach Dr. Richard and Sergeant Evan “Dodger” Winslow (Jeff Kober) have to take up arms to defend the base. TV Guide once ranked "Tet '68" as one of the 100 greatest television episodes of all time. Another unique and highly-praised episode is "Vets," which features interviews with real Vietnam veterans as the story plays out. As Season Two concludes, McMurphy's extended tour of duty comes to an end and she goes home to Kansas. Dana Delany, who plays McMurphy, won an Emmy Award for Outstanding Lead Actress in a Drama Series.As I mentioned in my review of Season One, China Beach is a remarkable, unflinching look at an unpopular war and the men and women who had to do the dirty work. Now available at a street price of less than $20, Season Two is highly recommended.

The 1.33:1 standard definition image accurately recreates the aspect ratio in which China Beach was shot and appeared on television screens in 1988 and 1989. The image quality is somewhat variable, with minor fluctuations in color accuracy and black levels, but the transfers do not exhibit any damage or focus issues and there is nothing which detracts from the powerful dramatic elements of the series

The Dolby Digital 2.0 audio is fine. Dialogue is clear and understandable, which is good news since there are no subtitles. Music clearance issues made it impossible to release China Beach exactly as it originally appeared on television, but the producers did yeoman's work to clear most of the original music. Those who are interested in knowing what music has been cut or replaced can find it here:More About "China Beach" DVDThe music sounds consistently good and viewers who lived during the era of the Vietnam War will find themselves re-living those days, for better or worse.

The Season 2 set of China Beach contains several extras.1. "Voices of War: The Real China Beach" is a featurette which is self-explanatory.2. There are interviews with series regulars Robert Picardo, Marg Helgenberger, and Michael Boatman.3. There is a commentary track for the episode "Vets," featuring China Beach co-creator and executive producer John Sacret Young, script consultant Lydia Woodward, and story editor Carol Flint. The commentary track was recorded in 2003, which gives you an idea of how long it took to bring the series to DVD.4. Also included is a 12-page color booklet and episode guide.

China Beach is a powerful and rewarding television series about the Vietnam War which is as relevant today as it was 25 years ago. Whether you were a fan of the show when it first aired or missed it during its network run, China Beach remains must-see television.