Not to be confused with director Steven Soderbergh's four-hour epic 2008 look at the Cuban freedom fighter, Richard Fleischer's 1969 Che! is a horse of a completely different color. A highlights docudrama of Che Guevara during his revolutionary period detailing operations in Cuba and Bolivia in the briefest possible terms, Che! neither insults its subject nor celebrates him, and in being a relatively sterile account of the man’s final decade of life, seems in fact rather trite and unnecessary. 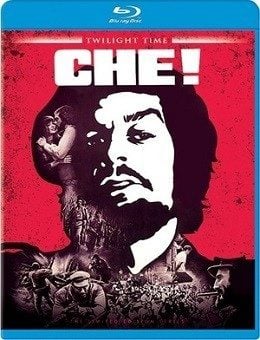 Ernesto "Che" Guevara (Omar Sharif) as the band’s medic lands with dozens of other revolutionaries in Cuba in 1956 ready to being a coup to overthrow the corrupt Batista regime. With early losses reducing their number to seventeen, Che and his fellow comrade-in-arms Fidel Castro (Jack Palance) stay in the jungles and gather recruits and generate momentum by plotting a successful strategy to take Santa Clara and cut off Havana from the rest of the country. With victory in hand, Castro is ready to set up his own government with Che in several important cabinet roles, but a few years of relative inactivity prey heavily on his impatient spirit, and he leaves Cuba determined to lead a complete Latin America revolution beginning in Bolivia. His reception there, however, is far different from the one he experienced in Cuba.By reducing a decade of a man’s life highlighted by many battles, victories, and defeats into a ninety-minute movie, the script by Michael Wilson and Sy Bartlett seems more like a Cliff’s Notes biography of a notorious name in the annuls of rebel revolutionaries. Director Richard Fleischer stages scenes that show us Che’s guts, his passion, his military skill (the script alleges that all of the brilliant military maneuverings were Che’s ideas and that Castro frequently changed strategies based on Che’s suggestions claiming them as his own even down to Che’s ideas of bringing in Russian missiles to Cuba after the takeover), and his impatience with less than everyone’s best efforts. Working again in widescreen, Fleischer stages some wonderful compositions of otherwise static dialogue scenes placing his actors so that the entire frame is filled with people standing and reclining, and the action scenes, especially a memorable early one where the guerillas, out of ammunition, bluff their way into capturing an ammunition arsenal thus generating a new sense of purpose for the faltering Cuban revolutionaries and the latter increasingly disastrous missions in Bolivia all show his expert experience behind the camera. But the script lets down the filmmakers time and again by not offering a decent sense of time (unless one knows the history of the fall of Batista or of the Cuban Missile Crisis, he’d be at a loss to know just how long these events were spaced out) even though actual historical footage of the era featuring President Kennedy’s demands about the missiles or the United Nations delegates enjoying the Russian ambassador’s squirming and avoidance of the question get sprinkled through the film. The movie uses a motif of a series of people who interacted with Guevara narrating sequences in the movie in flashback, but it seems phony and never rings true.Though Omar Sharif does a more than capable job as Che Guevara as written, we don’t feel like we are ever able to burrow beneath his skin and gain a true understanding of his driving forces or of how he could leave his wife and children to go off on these missions with nary a word about their well being or any chance of their joining him once victory has been attained in Cuba. Jack Palance in a fake beard may bear some slight similarity in looks to the real Fidel Castro, but he seems about as Cuban as a day old bagel. Some other famous names pass through the picture: Cesare Danova as Ramon Valdez, Robert Loggia as Faustino Morales, Woody Strode as Guillermo, Albert Paulsen as Captain Vasquez, and Barbara Luna as Anita Marquez, but none are given characters developed explicitly enough to register as individuals. In fact, Frank Silvera as a goatherd who expresses the Bolivian national consciousness about Guevara’s presence in their country makes a stronger impression in his one climactic scene than the other supporting players do in the entire movie.

The film’s Panavision 2,35:1 theatrical aspect ratio is faithfully delivered in a 1080p transfer using the AVC codec. Though color may seem to be just a trifle faded or at best subdued in the early going, the film is generally nicely hued with believable skin tones, and sharpness is very good, good enough to see the rather amateurish make-up job done on the beards of the two top-billed stars in close-ups. Black levels are fine, and while contrast may vary occasionally from shot-to-shot, the image is overall quite pleasing throughout. There are no age-related specks to be seen. The film has been divided into 12 chapters.

The disc’s DTS-HD Master Audio 1.0 sound mix (the liner notes and menu state 2.0, but my receiver readout says differently) is clear and typical of its era but rather unspectacular. It does handle the battle scenes with enough oomph to pass muster, and the dialogue has been recorded well enough to be discerned with no problems. Lalo Schifrin’s music score also has better than adequate punch in this mono mix. No age-related hiss or crackle spoils the listening experience.

Isolated Score Track: Lalo Schifrin’s score is presented in DTS-HD Master Audio 2.0 mono.Why Che? (6:14, SD): a vintage promotional featurette produced during the making of the film with sound bites from stars Omar Sharif and Jack Palance and director Richard Fleischer and lots of brief clips from the film.TV Spot Ad (0:21, SD)Theatrical Trailer (3:16, SD)Six-Page Booklet: contains some interesting color stills from the film, poster art on the back cover, and film historian Julie Kirgo’s intriguing analysis of the movie.

If one is looking for an abbreviated account of the last decade in the life of revolutionary Che Guevara, Richard Fleischer’s Che! may suffice if one doesn’t take its facts and opinions as gospel. There are only 3,000 copies of this Blu-ray available. Those interested should go to www.screenarchives.com to see if product is still in stock. Information about the movie can also be found via Facebook at www.facebook.com/twilighttimemovies.

I saw this film when it first came out but I have never since it since then. I have pretty well forgotten everything about it. Regarding the colors: the print I saw was new and clean but I don't recall the colors really "popping" off the screen so this disc might well be an accurate representation of the film.

In the past twenty-five years or so, I have become a big fan of Richard Fleischer who I now regard as one the the great versatile directors, alongside Victor Fleming, Michael Curtiz, Raoul Walsh and John Huston. These are the directors who do not have a big fan base because they worked with a wide variety of material. In the case of Richard Fleischer, any man who can direct so excellently such varied films as The Narrow Margin, Violent Saturday, Barabbas, Compulsion, The Boston Strangler, Ten Rillington Place and Mr. Majestyk deserves enormous respect.

For that reason I might buy this disc even though the subject matter does not especially interest me.

I agree with you completely about Richard Fleischer. He's an undersung director who can take even mediocre material as he has to work with here and make it interesting and hold one's attention. As I mentioned in the review, he makes interesting compositions even out of static dialogue scenes.

Che! was one of the original "50 Worst Films of All Time," if you know that late 70s volume by the Medved brothers. It's grievously miscast but well meant and not as terrible as all that; not a slog like Soderbergh's film.

On yes. I'd forgotten about the worst book of all time!
You must log in or register to reply here.