Director Satyajit Ray always claimed that Charulata was his favorite of his own films, and watching it now almost a half century after its premiere, it’s easy to see its appeal. It’s an unconventional triangle love story told in such a delicate and adult way with scores of striking images and adept, in-depth characterizations that simply sear the soul. Great performances and haunting camerawork combine to make a singular cinematic work of art. 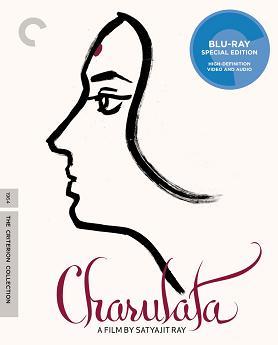 Charulata (Madhabi Mukherjee) is a bored 19th century housewife living luxuriously but without any worthwhile companionship. She and her older husband Bhupati (Shailen Mukherjee) share nothing in common: he’s deeply into politics and printing his newspaper filled with political ideology while she’s more interested in music, fiction, and creative writing. When Bhupati’s young, energetic cousin Amal (Soumitra Chatterjee) arrives for an extended stay, it’s like a breath of fresh air for Charulata. They both write and critique each other’s work vowing not to share it with others and have picnics and share quiet times that stimulate each of them. But Charulata begins to fall deeply in love with Amal (who is clueless about her feelings), and when another family member shockingly betrays Bhupati’s trust, Amal’s sudden decision to leave so as not to be a further burden on the family leaves Charulata completely bereft.Satyajit Ray’s screenplay is based on a turn of the century masterpiece of Indian fiction by Rabindranath Tagore called The Broken Nest, and while changes have been made in the original story, the gist of this dysfunctional marriage getting shaken up by an unsuspecting interloper is still present. Ray’s measured approach to the storytelling is typical of his technique, but that extended pacing allows the actors to really delve deeply within their characters, and it also allows the camera to prowl among and around them revealing many shades of emotions without any dialogue needing to be spoken. The early picnic in the garden as Amal lies on the ground writing while Charulata swings energetically to and fro is a glorious director’s tour de force, and that’s just one of the special scenes Ray has his store for his audience. He also delves into her brain to show us a glimpse of her imagination at work: a kind of bizarre Mardi Gras-like celebration which inspires her to write a story which is published in her husband’s competitor’s periodical. And the camera is never far for Charulata’s face during the film as it registers her boredom or her exhilaration or her despair (the latter is the film’s one clumsily staged sequence near the climax when she lowers her guard melodramatically enough for her husband to figure out why she’s in mourning).As in The Big City, the film belongs to Madhabi Mukherjee as the title character. Her every inflection is caught and registered by the camera, and she’s so alluring that we follow her willingly wherever she goes. Soumitra Chatterjee is magnificent, too, as the innocent Amal caught up in her romantic fantasies when he feels for her more of a big brother, and he also sings the song “O Fair One” quite nicely. Shailen Mukherjee registers the heartbreak of his two domestic revelations quite superbly while Shyamal Ghoshal and Gitali Roy do fine as the brother and sister-in-law caught up in the underdeveloped embezzlement subplot. Bholanath Koyal bumbles amusingly as the family servant who ignores most of their orders.

The film is presented in 1.33:1 and is offered in 1080p resolution using the AVC codec. Sharpness for the most part is quite excellent, and the grayscale is likewise mostly superb. There are occasional shots that seem a bit soft and images that sometimes look a tad digital rather than like film. But this restoration is overall a more handsome achievement than the one for The Big City. The white subtitles are easy to read. The film has been divided into 21 chapters.

The PCM 1.0 sound mix is a mixture of Bengali and English dialogue which has been well recorded and is not compromised in the mix with the Satyajit Ray music score and numerous songs or the sound effects. The mix seems very light on bass, and there is a bit of hiss here and there, but it’s otherwise a track typical of its era.

Actor Interviews (16:50, HD): a combination of interviews with the film’s two stars Madhabi Mukherjee and Soumitra Chatterjee. They each discuss their characters and the film’s plot and their memories of working on the film with director Ray.Adapting Tagore (23:44, HD): historians Moinak Biswas and Supriya Chaudhuri discuss the original novella and Ray’s adaptation and offer something of an analysis of how the film marvelously captures the book’s tone and themes while changing various aspects of its plot.Satyajit Ray on Progress (12:51): an audio-only interview with film historian Gideon Bachmann recorded in 1966 in which Ray discusses his films as showing the progress of India through the generations.32-Page Booklet: contains cast and crew lists, many stills from the movie and behind-the-scenes shots, critic Philip Kemp’s analysis of the movie, and excerpts of Ray’s biographer Andrew Robinson’s interview with him where he talks about Charulata.Timeline: can be pulled up from the menu or by pushing the red button on the remote. It shows you your progress on the disc and the title of the chapter you’re now in. Additionally, two other buttons on the remote can place or remove bookmarks if you decide to stop viewing before reaching the end of the film or want to mark specific places for later reference.

One of Satyajit Ray’s greatest achievements, Charulata comes memorably to Blu-ray in a vivid Criterion video and audio release with some worthwhile bonuses contained in the package. Recommended!

Thanks for this review (and also for 'The Big City').I've been expecting/waiting for the 'Apu Trilogy' from Criterion, but I suppose with Criterion releasing some of Ray's other films beforehand (including 'The Music Room'), I'll have the opportunity to explore those films first, instead of the other way around.
You must log in or register to reply here.