ABC’s Castle is one of the breeziest and most ingratiating of all the network procedurals, and its sixth season has turned out to be one of its strongest yet. A terrific collection of baffling mysteries, some plotted with a comic bent and others done in utter seriousness, Castle has also managed this season to walk a wonderfully fine line between plot and personal relationships now that the producers have the two main character engaged, skillfully avoiding any semblance of the Moonlighting curse that has plagued other shows that tried pairing up their two previously smitten main characters. Only a couple of stumbles during the year (including a seriously misjudged season finale) prevented this season of Castle from being its best ever. 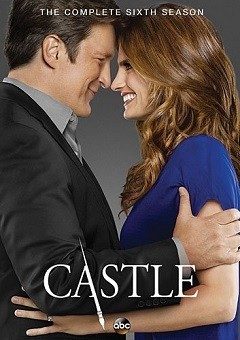 Detective Kate Beckett (Stana Katic) has taken a job with the FBI at the start of season six, and it takes the writers four episodes to get things back to normal with Kate running her own NYPD squad assisted by Detectives Ryan (Ryan (Seamus Dever) and Esposito (Jon Huertas) and with mystery novelist Richard Castle (Nathan Fillion) as her ever-ready-with-a-wild-theory sidekick. Captain Victoria Gates (Penny Johnson Jerald), a hard-nosed cop who demands to be called “sir,” has been somewhat softened this season and seems willing to work in concert more smoothly with the crime-fighting quartet. At home, Castle has a more prickly than usual relationship with now nineteen-year old daughter Alexis (Molly Quinn) since he doesn’t like her new boy friend at all, and mother Martha (Susan Sullivan) is still around dispensing advice, often unsolicited but sometimes helpful, to one and all.The writers get a case of the “show biz allusions” as no less than five episodes owe their underlying constructions to specific special moments or set-ups from The X-Files, Carrie, National Treasure, The Devil Wears Prada, and Inception. Even though most of the episodes feature closed-ended mysteries, it does take a two-part episode (split by a major part of the season) to finally wrap up the murder of Kate’s mother Joanna which has been a driving force behind her work as a detective since the beginning of the series. The season also features the return of James Brolin as Castle’s spy father and features an episode where we get to meet Captain Gates’ sister with whom she’s on very spiky terms. The season finale is a preposterous combination of comic mayhem as wedding preparations go awry while Beckett frantically searches for an old boy friend whom she is reminded she actually married fifteen years previously and who now needs to sign marriage dissolution papers. It’s a major misfire of a cliffhanger (since it ends in seeming tragedy after all the farcical absurdity of the episode), but its sour taste is quite abetted by three memorable episodes earlier in the season. A delightful episode involving a possible time traveler (Joshua Gomez) is probably the comic highlight of the year (if it isn’t the episode that allows everyone to find their inner 1970s vibe with Ryan and Esposito making a hilarious variation on Starsky and Hutch), while an episode where fire threatens to be the end of the bromantic detective duo who are trapped two floors underground with no escape and an episode where Castle and daughter Alexis rush to save a man three days away from execution make for incredibly tension-filled and ultimately moving installments.The cast plays together continually with a joyously delicious sense of charm which makes the episodes, even with the most ghastly of crimes, a pleasure to watch. Fillion and Katic have a palpable chemistry that makes the show sexy fun from week to week, and Dever and Huertas banter back and forth delightfully with an ease and precise timing which six years of performing together has brought them. Susan Sullivan’s character has less to do this season than she’s had in the earlier seasons, but she has mellowed enough now to make her an unobjectionable part of the ensemble. Molly Quinn continues to play Alexis as wise beyond her years, a big help when dealing with a father who’s oftentimes more juvenile in spirit than she, but she and Fillion also share a close bond that makes them a father-daughter combination that’s really believable.Here are the twenty-three episodes contained on five discs in the season six box set. The names in parentheses are the participants in that episode’s audio commentary:1 – Valkyrie2 – Dreamworld3 – Need to Know (characters Kevin Ryan and Javier Esposito)4 – Number One Fan5 – Time Will Tell6 – Get a Clue7 – Like Father, Like Daughter8 – A Murder Is Forever9 – Disciple10 – The Good, the Bad, & the Baby (director John Terlesky, writer Terri Miller, actors Nathan Fillion, Seamus Dever)11 – Under Fire12 – Deep Cover (writer Terrence Winter, actors Nathan Fillion, Susan Sullivan, James Brolin)13 – Limelight14 – Dressed to Kill15 – Smells Like Teen Spirit16 – Room 14717 – In the Belly of the Beast (writers Andrew Marlowe and David Amann, director Rob Bowman)18 – The Way of the Ninja19 – The Greater Good20 – That ‘70s Show21 – Law and Boarder22 – Veritas23 – For Better or Worse

The program is broadcast on ABC at 720p in 1:78:1, and these downconverted 480p transfers look on the whole very good. The producers switched over this season to digital photography, and yet the program continues to have a very warm color palette, and the DVD conveys this quite well with close-ups and medium shots especially registering at near-HD quality when upconverted. Otherwise, sharpness is very well done with occasional nods to soft-focused glamour close-ups, and color saturation is well above average while flesh tones remain realistic and appealing. Black levels are generally excellent and sometimes stunning. Only the New York City flyovers, some blinds in the precinct, and an occasional patterned shirt reveal some slight aliasing and moiré patterns. Each episode has been divided into 7 chapters.

The Dolby Digital 5.1 audio track makes a better than average use of its surround opportunities. Robert Duncan’s music is always an immersive element in the show, and the sound designers make sure that ambient sounds get placed around the soundfield in almost every episode. Of course, the show’s primary element is dialogue, and it’s well recorded and accurately placed in the center channel.

Audio Commentaries: four are available this year (see above episode list for participants). Seamus Dever and Jon Huertas’ little in-joke doing the commentary in character wears out its welcome fairly early, and the next two featuring cast members allows for a bit too much fawning over one another’s work and the great appreciation they all have for the other cast and crew. The commentary with the writers and director for episode # 17 really has the most behind-the-scenes technical information to offer.Deleted/Extended Scenes: ten scenes are spread out over four of the five discs in the set.Castle Karaoke (2:38): a segment when Seamus Dever must sing a karaoke version of “What I Like About You” (and badly) in a strip club is shown in its entirety.Castle in a Day with Stana Katic (6:57): shooting the wedding sequences and aftermath in the season finale allows the series’ female star to wax philosophically about her work on that particular day.A Few of Our Favorite Things (26:38): all of the cast regulars along with crew members writers Andrew Marlowe, Terri Miller, and director Rob Bowman recall favorite moments from six seasons on the show as well as responding to viewer favorites which are revealed to them. An unaired moment from the season four finale is also shown for the first time.Gag Reel (6:07)Promo Trailers: Maleficent, Star Wars Rebels, Sleeping Beauty, Legend of the Neverbeast, Marvel’s Agents of S.H.I.E.L.D., Captain America: The Winter Soldier.

Winner of the People’s Choice Award this season for Favorite Drama Series, Castle had another excellent season of mysteries and romance. While one wishes the series could be released in high definition, the DVDs offered here certainly look and sound fine and offer an entertaining reminder of a fine season for the series. Recommended!

Since there is no blu-ray, I'll stick to iTunes, which I believe is 1080p.

I agree that Castle has handled the "Moonlighting" issue better than any series I can think of.
You must log in or register to reply here.