Despite two miscalculations for story arcs during its seventh season on the air, ABC’s hit procedural Castle otherwise remained one of the breeziest and most ingratiating of all network mystery series. The cast is as solid as ever, the production is first-rate right down the line, and the self-contained mysteries the writing staff dreamed up for what many thought would be the last season of the show were frolicsome and fun. As it turned out, the seventh season did not turn out to be the last one, and the series is coming back for another season though what changes may take place with the program remain almost as mysterious as some of the crime capers our two now-married protagonists must tackle. 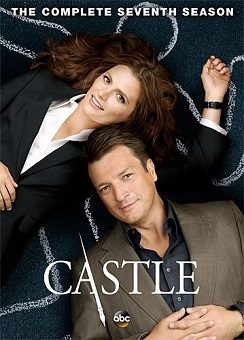 The show’s major snafu this season actually involved the cliffhanger which ended season six: mystery writer and NYPD consultant Richard Castle (Nathan Fillion) on the way to his wedding to his work partner Detective Kate Beckett (Stana Katic) was run off the road by person or persons unknown and has gone missing. Season seven finds Kate after two months unable to make much headway in locating the missing Castle until, somewhat miraculously, he’s found drifting in a dinghy in the Atlantic Ocean with two months of his memory wiped clean. Though his family and friends find his amnesia hard to swallow, eventually enough clues which don’t add up convince them that he’s telling the truth. The answers they (and we) are looking for don’t come until episode twenty of the season, and when they do come, nothing much rings very true, and the entire mystery ends up being crushingly underwhelming. Midway through the season, when Castle assists a mob boss in an investigation of a case involving his crime family, Rick finds himself being booted out of the precinct setting up five episodes where he becomes a private eye investigating cases sometimes alongside Kate (they finally have their wedding in episode five) and sometimes alone with the NYPD unofficially assisting him. These episodes probably were a nice change of pace for the staff writers, but the easy camaraderie with his wife and his buddies at the precinct (including Jon Huertas’ Esposito and Seamus Dever’s Ryan) becomes somewhat strained during these episodes, and the cavalier way he's rejected and then welcomed back seems phony, another unsuccessful attempt to mix things up a bit after seven seasons.

Otherwise, however, the murders are as unusual and the solutions as engaging as ever: the death of a toy company boss man masquerading as a janitor at his warehouse, a pool hustler killed by an invisible perpetrator, a cyber serial killer on the prowl, an over-the-hill movie star murdered, an astronaut in a Mars simulation exercise somehow killed, and a Saturday Night Live-style TV producer rubbed out by a member of his cast or crew. And then there are spotlight episodes for the two leading players as they honeymoon at an Old West dude ranch, an exciting subway hostage story which features Javier Esposito front and center, and a bittersweet story for Kevin Ryan with an extra mouth to feed at home moonlighting for his brother-in-law’s security company and getting dragged into a murder that happens before his eyes. Castle’s daughter Alexis (Molly C. Quinn) plays a major role in one of the season’s most exciting adventures: a murder on board a transatlantic flight to London with a plane full of suspects. The February two-part sweeps event this season brings back two serial killers who had evaded capture in seasons past: Dr. Kelly Nieman (Annie Wersching) and Jerry Tyson (Michael Mosley), a plastic surgeon who alters victims for her lover before he butchers them. The season finale which could easily have served as a series finale if the show hadn’t been renewed exorcises a demon haunting Castle from the time he was eleven: a murderer who spared his life in Hollander’s Woods, a mystery which thankfully does not end in a cliffhanger.

The cast plays together continually with a joyously delicious sense of fun which makes the episodes, even with the most ghastly of crimes, a pleasure to watch. Fillion and Katic have a palpable chemistry that makes the show sexy fun from week to week, and their characters’ marriage in no way intrudes on the general sense of mischief and delight. Dever and Huertas banter back and forth delightfully with an ease and precise timing which seven years of performing together has brought them. Susan Sullivan’s mother character as in previous seasons has less to do than she had in the earlier seasons, but she has mellowed enough now to make her an unobjectionable part of the ensemble. Molly Quinn continues to play now-college junior Alexis delightfully, a big help when dealing with a father who’s oftentimes more juvenile in spirit than she, but she and Fillion also share a close bond that makes them a father-daughter combination that’s really believable. Penny Johnson Jerald as Captain Victoria Gates barks out objections and warnings rather tiresomely as in her last couple of seasons on the show.

Here are the twenty-three episodes contained on five discs in the season seven box set. The names in parentheses are the participants in that episode’s audio commentary:

The program is broadcast on ABC at 720p in 1:78:1, and these downconverted 480p transfers look on the whole extremely good anamorphically enhanced for widescreen televisions. The program continues to have a very warm color palette, and the DVD conveys this quite well with close-ups and medium shots especially registering at near-HD quality when upconverted. Otherwise, sharpness is very well done with occasional nods to soft-focused glamour close-ups, and color saturation is well above average while flesh tones remain realistic and appealing. Black levels are generally excellent and sometimes stunning. Only the slightest bit of line twitter was noticeable in the flyover segues between scenes. Each episode has been divided into 7 chapters.

The Dolby Digital 5.1 audio track makes a better than average use of its surround opportunities. Robert Duncan’s music is always an immersive element in the show, and the sound designers make sure that ambient sounds get placed around the soundfield in almost every episode. Of course, the show’s primary element is dialogue, and it’s well recorded and accurately placed in the center channel. In the season finale, there is a memorable moment where directionalized dialogue makes for a creepy and most effective suspense sequence.

Audio Commentaries: the season premiere commentary is the lesser of the two offered this season with a lack of discussion of the major mystery elements. Much livelier and more informative is the discussion during the second of the two-part sweeps episode featuring the show’s star and primary villain.

Deleted Scenes (6:03): twelve brief scenes are scattered across the five discs in the set found in the bonus feature menus rather than attached to the episodes from which they were originally excised.

“Definition of Love” (5:01): Seamus Dever and Jon Huertas in character perform this music video. It was directed by Jon Huertas.

The Cast Behind the Cast (15:54): creator/producer Andrew Marlowe introduces us to the background players and stand-ins for the stars, many of whom describe their daily routines and their methodology for carrying out their duties.

Promo Trailers: Once Upon a Time, Scandal, How to Get Away With Murder.

Except for a couple of stumbles, season seven of Castle was a strong one with engaging mysteries and a cast that now performs together like a well-oiled machine. It’s a pity Disney hasn’t seen fit to release the show on Blu-ray, for with its strong production values, it would make a stunning high definition release. Nevertheless, recommended!

Thanks for the review! Can you list what episodes the deleted scenes are from? Thanks!

I don't know why, but my wife and I seemed to move on to other shows after he was found in boat. Based on your review we may have to go in and watch the rest of the season after all.
You must log in or register to reply here.