A lesser movie musical in the annals of 20th Century-Fox, Gregory Ratoff’s Carnival in Costa Rica is nevertheless tuneful and filled with good dancing and is a film that showed off typically eye-popping Technicolor at every opportunity. Fox sent its B-team in terms of box-office draws to head this film (no Grable, Faye, Crain, or Haver), so the film doesn’t have much of a reputation and was clearly pushed aside for Fox’s big A-musical of 1947 Mother Wore Tights. But when you’ve got a musical featuring dancing sensation Vera-Ellen being choreographed by the virtuoso Russian ballet star Leonide Massine, it demands attention. 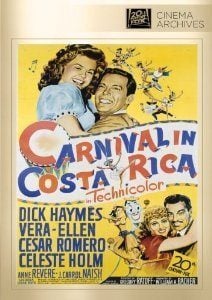 True to the custom of their country, Mama and Papa Molina (Anne Revere, J. Carrol Naish) have arranged a marriage for their daughter Luisa (Vera-Ellen) with Pepe Castro (Cesar Romero), the son of their dear friends (Pedro de Cordoba, Mimi Aguglia). But while studying in America, Pepe has fallen for nightclub chanteuse Celeste (Celeste Holm) while Luisa meets American coffee buyer Jeff Stephens (Dick Haymes) and falls for him. While Pepe and Luisa struggle with the conflicts between their own feelings for others and their senses of duty to their families, the families are oblivious to what’s really going on with their children.The screenplay by John Larkin, Samuel Hoffenstein, and Elizabeth Reinhardt is a rather flimsy skeleton on which to hang the film’s buoyant musical numbers, and it contains that most irritating of concoctions when the two conflicted youngsters finally summon up their courage to face their parents only to not be allowed to speak while the fathers blather on about the upcoming nuptials (had they been able to get a word in, the film would have been at least ten minutes shorter and a musical number or two less populated). With the action taking place over the Christmas holiday (but with no signs of that celebration; it’s more like Mardi Gras), the movie is alive with street fairs, parades, and fiestas. Vera-Ellen gets three dance numbers in the movie, all giving the film its primary reason for existing. The first begins with the song “I’ll Know It’s Love” (she’s dubbed by Pat Friday) which then goes into a joyous anticipation dance knowing she’s soon to meet her intended. But it’s the other two numbers that show off her genius: a flamenco-inspired number with choreographer Leonide Massine as her partner and a later dream sequence where Vera dances with abandon at her own wedding, a definite showstopper and the number which most clearly suggests some of the great MGM numbers she’d be dancing in a few years.Curiously, Dick Haymes, the film’s top-billed star, doesn’t even appear until thirty-four minutes into the movie. He’s in great voice and warbles two beautiful ballads (score mostly by Ernesto Lecuona and Harry Ruby): “Mi Vida” as he and Vera share a ferris wheel ride and “Another Night Like This,” obviously meant to be the film’s chart-topping ballad (it didn’t make the charts), but he and Vera-Ellen don’t have much chemistry together, so their eventual reunion doesn’t really hit the right notes. Celeste Holm, fresh from starring in the Broadway hit Bloomer Girl, has the kind of Charlotte Greenwood role in the film, the good-natured gal who’ll only be taken for granted for so long until she makes her own arrangements. She’s lots of fun in the film, dances well with Cesar Romero (who is his usual reliably entertaining self), and sings acceptably in the street fair number “Qui Pi Pia” and the film’s big production number “In Costa Rica” which shows director Gregory Ratoff masterfully moving the camera to catch all of the color and excitement of the colorful parade.

The film is presented in its original 1.33:1 theatrical aspect ratio. Though Fox may have junked its Technicolor masters, this film is one of the few in its vaults that still retains that Technicolor look with vivid reds and greens coming across quite wonderfully and with deep saturation giving at certain moments a distinctly Technicolor look. But despite ample sharpness, the transfer is not without problems. There has been no clean up so multi-colored dust specks turn up from time to time along with brightly colored cue markers for reel changes. In some of the darker scenes, blacks can be crushed though black levels otherwise are quite impressive for a transfer like this which has been given minimal handling. The film has been divided into chapters every ten minutes, so this film has 10 chapters.

The Dolby Digital 2.0 mono sound mix is decoded by Dolby Prologic into the center channel. As with most of the Fox Archive releases, the volume level for the disc has been set way too high and will require manual adjustment by the listener in order to avoid audio distortion and possibly speaker damage. There is some intermittent hiss and crackly distortion, but it’s not consistently present. The dialogue is clear, and fidelity is more than adequate to give the vocals, particularly by Dick Haymes, some nice resonance. The background score and the sound effects never interfere with one’s understanding of the dialogue.

There are no bonus features with Fox’s made-on-demand discs, not even a trailer.

A nice addition to the Fox Archive collection, Carnival in Costa Rica may have a bird-brained plot, but the singing and dancing are more than adequate compensations which lovers of musicals won’t want to miss.