Forget Stars Wars Trilogy, forget Return of the King: Extended Edition - THIS is the DVD of year! For me, anyway.

Anyone who has ever asked, "what are dreams and what do they mean?" should buy this and lend it to family, friends and people they have just met!

Jung is one of my all-time heroes - this a great piece of news for me. Thanks, Kino. 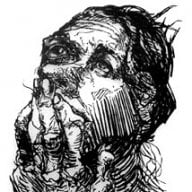 This is now out. Luckily, I found a place near me that is carrying it and I'm going to pick it up tonight.

Gordon: Have you purchased it yet? If so, what are your impressions?

I hate to rain on your parade, Gordon, but a few minutes with a decent introductory psychology textbook should disabuse you of the scientific validity of much of the psychoanalytic movement, including the bulk of Jung's theories.

Hi, Kev. Yes, I have the disc. It's a great introduction to Jung and the interviews with his colleagues and friends is illuminating. The Face to Face interview isn't that revealing, but such footage of Jung is rare and it's great to have it, regardless. The transfer quality is good for such old 16mm film elements and the sound is adequete.

I strongly disagree. Jung's insights into the human psyche are endless fascinating and illuminating. If it didn't have a personal effect on me, then I wouldn't have bothered with anything he had to say!

I'm sure Jung has had his debunkers in the past as well as the present. But to apply conservative rationalism to the complexities of the human psyche, consciousness, gnosis and to come to any definate answers is more arrogant that Jung could ever have been himself.

But this isn't the place to discuss this, unfortunately.

Thanks for taking interest, guys.

Not arrogant, just using facts and careful use of objective analysis. If you can show me empirical proof for the theory (note I'm not denying that in some cases the therapy works) then I'll listen. But I think I'll be in for a long wait.

I really don't want to get into a discussion on this, Andrew - not on this message board, that's for sure!

I understand that you are a psychogerontologist and you would be considered more of an 'authority' on psychology than I, but your pesistance here is quite puzzling.

Being able to see the Face to Face interview from 1959 was something I was looking forward to; it's the first thing I watched. I will get to the main documentary in short order.

As Jung says in the aforementioned interview: "Man cannot stand a meaningless life." One has to wonder how much the complexity of the human psyche -- for instance, conceptions of completion and meaning for a given individual -- can even be approached under the constrictions of "scientific validity." If you take it to the extreme, even the most rudimentary insights about the psyche are obliterated under that microscope. Jung broached this question -- of the degree to which analytical psychology is or isn't a science -- a few times in his life. His answers were, of necessity, ambiguous. Nevertheless, Jung's approach was an empirical one and his insights into the nature of human behaviour were extraordinary.

However, as Gordon correctly states, this is hardly the forum for such a discussion. It is great that we have a documentary like this on DVD and people can approach it is an introduction to the life and work of Jung.

The simple point is that psychoanalysis is objected to by a large proportion of professional psychologists (myself included) because it uses post hoc reasoning, cannot be empirically verified, and in any case, employing Occam's Razor, there are far more straightforward ways of explaining the same phenomena. The 'the human mind is far too rich and complex to be trivialised by rationalisation and scientific analysis' argument which always gets offered as a defence is, I'm afraid, just woolly thinking. And seeing the subject matter promoted as the answer to something is like a red rag to a bull.

Let me make an analogy. Suppose there had been a DVD on witchdoctors and someone had written 'if you've ever wondered how to cure someone of cancer then here's the answer!'. And suppose I was a medical doctor and objected to this? Would people say that this was an inappropriate objection?

If the original thread had said 'there's a fascinating DVD about Jung' and left it at that I'd have no problem at all. However, by presenting it as if it's the answer to something you invite legitimate criticism within this thread, because people might assume that Jung provided a solution that nobody disagreed with.

As you will see, I did not present Jung's theories as an unquivocal answer to modern man's psychological and spiritual problems.

You obviously have an axe to grind with Jung. Just because you and many other psychologists do not subscribe to Jung's theories, it doesn't mean that you are right. It doesn't mean that Jung (and his supporters) was 100% right either.

Jung advocated searching in oneself - to individuate oneself during their life. Not to search for a personal 'God', but one's own true Self. What's wrong with that?

Well, the idea is a nice one if you're an atheist, but it has nothing to do with what has been said before in this thread (my original point was that Jungian explanations of dreams are debatable at least in spite of your gushing praise). However, since Jung had at least one affair with a patient, flirted with fascism and had some very sexist views (read the stuff about anima and animus carefully ) then forgive me if I get my inspiration from other sources.

I feel insulted by your remarks; I find your arrogance staggering, Andrew.

I think this thread should be closed now.

In before the lock.

But seriously, I get the impression you don't know how science works. Somethign which might be correct but you have no way of knowing is useless next to something that can be tested.

Oh, and offense is no substitute for debate. if you give up now, Andrew wins.
Expand signature
My Collection

I'm gracious in defeat when it comes to debates on psychology on DVD message boards.

The legendary C.G. Jung understood perfectly well the limitations of psychology as a science. He worked diligently (as an empiricist) throughout his life to understand the facts of the psyche and his lasting influence (which will continue) speaks for itself. Perhaps it would be instructive to reflect on what he wrote in 1954, in a piece entitled "On the Nature of the Psyche":

"The problems of analytical psychology, as I have tried to outline them here, led to conclusions that astonished even me. I fancied I was working along the best scientific lines, establishing facts, observing, classifying, describing causal and functional relations, only to discover in the end that I had involved myself in a net of reflections which extend far beyond natural science and ramify into the fields of philosophy, theology, comparative religion, and the humane sciences in general. This transgression, as inevitable as it was suspect, has caused me no little worry. Quite apart from my personal incompetence in these fields, it seemed to me that my reflections were suspect also in principle, because I am profoundly convinced that the 'personal equation' has a telling effect upon the results of psychological observation. The tragic thing is that psychology has no self-consistent mathematics at its disposal, but only a calculus of subjective prejudices. Also, it lacks the immense advantage of an Archimedean point such as physics enjoys. The latter observes the physical world from the psychic standpoint and can translate it into psychic terms. The psyche, on the other hand, observes itself and can only translate the psychic back into the psychic. Were physics in this position, it could do nothing except leave the physical process to its own devices, because in that way it would be most plainly itself. There is no medium for psychology to reflect itself in: it can only portray itself in itself, and describe itself. That, logically, is also the principle of my own method: it is, at bottom, a purely experiential process in which hit and miss, interpretation and error, theory and speculation, doctor and patient, form a 'symptosis' or a 'symptoma' -- a coming together -- and at the same time are symptoms of a certain process or run of events. What I am describing, therefore, is basically no more than an outline of psychic happenings which exhibit a certain statistical frequency. We have not, scientifically speaking, removed ourselves to a plane in any way 'above' the psychic process, nor have we translated it into another medium. Physics, on the other hand, is in a position to detonate mathematical formulae -- the product of pure psychic activity -- and kill seventy-eight thousand persons at one blow.

This literally 'devastating' argument is calculated to reduce psychology to silence. But we can, in all modesty, point out that mathematical thinking is also a psychic function, thanks to which matter can be organized in such a way as to burst asunder the mighty forces that bind the atoms together -- which it would never occur to them to do in the natural course of things, at least not upon this earth...The psyche is the world's pivot: not only is it the one great condition for the existence of a world at all, it is also an intervention in the existing natural order, and no one can say with certainty where this intervention will finally end."

KevA - thanks for your lengthy quotation. I think what you argue is interesting and has some validity. A game I like to play with 'hard' scientists who claim they are objective is to ask how scales like the centigrade scale are measured. Part of the calibration involves everything being done at sea level. Why sea level? Because it makes psychological/intuitive sense. Oh ... Of course hard science is more internally consistent, can claim to be reducable to Newton's laws, etc, but the idea that any field of study is purely objective is specious.

I think one of the dangers with Jung is that he looked at the reductionist view of traditional psychology and then made the classic undergraduate mistake of saying 'but surely there's more? this is too simplistic'. Well, yes there is, and psychologists are well aware of this. But they are (usually!) also aware of the danger of moving beyond reasonable interpretation of empirical evidence into speculation and accordingly only examine what can be reasonably deduced. I think that one of Jung's problems was that he speculated and then attempted to find proof of the speculations.
You must log in or register to reply here.
Share:
Facebook Twitter Reddit Pinterest Tumblr WhatsApp Email Link