Captain Phillips is a white-knuckle thriller which keeps the viewer constantly on edge and wondering what will come next, even though the eventual outcome is already known to anyone who picked up a newspaper or watched the news on television in 2009. As with so many action films which are based upon real events, Captain Phillips is less about the story's ending than it is about the fascinating details of how a modern, huge cargo ship was hijacked by Somali pirates and the subsequent efforts by the U.S. Navy to save the ship's captain after he is kidnapped. This pulse-pounding adventure comes to Blu-ray in a glorious high-definition transfer courtesy of Sony and features a Golden Globes-nominated performance by Tom Hanks in one of the best roles of his career. 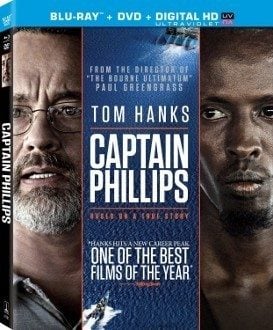 Captain Phillips opens in Underhill, Vermont on March 28, 2009. Richard Phillips (Tom Hanks), a middle-aged Captain in the Merchant Marine, is preparing to head overseas to Oman, where he has been assigned to take command of the cargo ship Maersk Alabama for a twelve-day cruise from Oman to Mombasa, Kenya. This is nothing new for Phillips, and in fact during the drive to the airport he and his wife, Andrea (Catherine Keener), discuss the fact that their life seems to be getting more difficult as they grow older. However, if Phillips has any reservations about taking the helm of the ship for this cruise he does not express them. Little does he know that at that very moment pirates in Somalia are being pushed by their warlord leader to get into their boats and find a ship to hijack.To anyone unfamiliar with modern piracy on the high seas, it must seem wildly improbable that men equipped with just automatic weapons and traveling in skiffs powered by outboard engines would be able to hijack a massive freighter which is several stories high. Even so, it does happen. As the Alabama is readied to get underway, Captain Phillips reviews his charts and recognizes that he will have to pass the coast of Somalia, where most of the recent piracy has taken place. Meanwhile, two boatloads of pirates head out to sea in search of a potentially profitable target. The most important Somalian in this story is Muse (Barkhad Abdi, a newcomer to acting who has been nominated for an Academy Award as Best Supporting Actor), a young man who speaks English and whose wiry frame belies his toughness and ambition. The pirates are equipped with radar, and they focus on Captain Phillips' ship when they realize that it is steaming down the coast alone. The Alabama also is equipped with radar, of course, and when two skiffs begin to close in on the ship Captain Phillips has his crew members go their muster stations (the civilian equivalent of a Navy ship being called to General Quarters). He is able to take evasive action that stirs up the surf so much that one skiff flees and the other sustains engine damage after crashing through heavy waves. However, Muse is not deterred. He equips his skiff with two outboard motors and resumes his pursuit of his prize.The crew of the Alabama does not have weapons - it is not a military ship, after all - but the ship is not entirely defenseless. It is equipped with high-power hoses and flares which can be used to repel anyone trying to come aboard. The film contains remarkable footage which shows exactly how the pirates were able to get aboard, at which point Captain Phillips orders nearly all of his crew to hide in the bowels of the ship. I do not want to get into any spoilers, but what happens next is a fascinating game of mental chess as Phillips tries to convince the pirates to take the cash which is onboard and give up their plans to pilot the ship to Somalia.Not only is Captain Phillips an exciting thrill ride, it is visually imposing. The scenes aboard ship, both in port and at sea, were filmed with an actual Maersk cargo ship which is a sister ship of the Alabama. The U.S. Navy also contributed the use of four of its ships, which were used in the scenes which recreate the tracking of the pirates after they kidnap Phillips. The use of real ships contributes greatly to the authenticity and realism of the events which are portrayed. In fact, several of the Navy scenes employ real sailors instead of actors, and as a former sailor myself I can confirm that they do an admirable job.Tom Hanks is outstanding as Captain Phillips, and Barkhad Abdi is a revelation as Muse. The film actually shows the Somalians in a somewhat favorable light. These are not stereotypical cutthroats who are pillaging for the fun of it. Muse tells Phillips that he is just a fisherman who is forced into piracy by his local warlord, and it is the warlord who reaps most of the profit. Muse is just a hired hand who has a boss to whom he must answer, and he says that he would like to visit America someday. Captain Phillips is beautifully directed by Paul Greengrass (The Bourne Supremacy, United 93, etc.), who knows how to make an action film without slowing it down with unnecessary sub-plots. The no-nonsense screenplay by Billy Ray is based upon the book "A Captain's Duty: Somali Pirates, Navy SEALS, and Dangerous Days at Sea" which was written by Captain Richard Phillips and Stephen Talty.You may have read about the rescue of Captain Phillips in newspapers or seen coverage of it on television, but until you see the film you will not have a real understanding of what transpired and you will not appreciate the enormous difficulties involved in trying to save his life. Captain Phillips is a movie which you will not soon forget and one which is worthy of many repeat viewings.

This 2.40:1 1080p high-definition transfer employs the AVC codec and is simply gorgeous throughout. The images are very sharp and highly detailed, with strong, accurate colors. Black levels are solid, contrast is very good, and shadow detail is outstanding. The excellent cinematography is by Barry Ackroyd, who previously worked with Paul Greengrass on United 93 and Green Zone, and who was nominated for an Academy Award for his work on The Hurt Locker.

The 5.1 DTS-HD MA audio superbly complements the wonderful picture quality. The sound of automatic weapons, the launching of flares, the pounding surf and the sound of Navy ships all come to life in this excellent soundtrack. Dialogue is clear and understandable throughout, and English subtitles pop up whenever the Somalians speak in their own language. The music is by composer Henry Jackman, who is reportedly a protégé of Hans Zimmer.

The extras on this Blu-ray release are not plentiful, but what is there is very good.A commentary track by the idiosyncratic director Paul Greengrass provides interesting insights in the making of the film."Capturing Captain Phillips" is broken down into three parts and is a fascinating look at the real story, interspersed with an examination of the original approach which director Greengrass brings to his films. The total running time is 58 minutes and it includes excerpts of from news coverage of the hijacking, as well as comments by the real Captain Phillips and his wife.The Blu-ray set also comes with a DVD of the film and an UltraViolet code which is good until 12/31/2017.Sony has included previews of American Hustle, The Monuments Men, Last Vegas, Inside Llewyn Davis, and The Armstrong Lie.

Captain Phillips is one of the best films of 2013, as evidenced by its six Academy Award nominations, including Best Picture and the Best Supporting Actor nomination mentioned above. It is certainly an exciting film from beginning to end, with incredibly realistic scenes of the hijacking and the subsequent pursuit at sea. Anyone watching it will come away with increased respect for the professionalism and proficiency of both the Merchant Marine and the Navy Seals

Tom Hanks was snubbed...no Oscar nomination for him this year...

Steve Tannehill said:
Tom Hanks was snubbed...no Oscar nomination for him this year...
Click to expand...

Whoops, my mistake. I'll correct that.

"Sony has included previews of American Hustle, The Monuments Men, Last Vegas, Inside Llewyn Davis, and The Armstrong Lie."

Can you really say "included" when you're talking about ads -- ads that you have to figure how to avoid before you can get to the film?
T

Can you really say "included" when you're talking about ads -- ads that you have to figure how to avoid before you can get to the film?
Click to expand...

Some people - myself included - like to see trailers, but if you want to skip them it's easy. When the first one starts to play after the disc loads, just hit the pop-up menu on the remote and it immediately takes you to the main menu. You also can skip through them, which takes a few seconds longer to get to the main menu.

When I review a Blu-ray I try to mention all of the content which is on the disc.

Tina_H_V said:
This will be the movie I watch this year as my Super Sunday Morning Matinee Movie, a new tradition I have at home in the hours leading up to Super Bowl kickoff. This will be the third time in four years I have done this for a Best Picture Oscar nominee. The others I have done this for, thus far, are as follows:2010: Inception (before SB XXXXV)2011: Moneyball (before SB XXXXVI)2012: I worked before SB XXXXVII, so no movie last year.
Click to expand...

That sounds like a great plan, Tina. I always avoid nearly all of the pre-game shows on Super Bowl Sunday, but I hadn't thought about a matinee movie. Maybe I'll do It's a Mad, Mad, Mad, Mad World that afternoon. That should get me in a good mood for the game.

Managed to grab the Steelbook Case edition at Best Buy. Definitely going to give it another whirl.

I can't help but wonder what's it's like to be a regular working man one moment, and an oscar nominee the next? Yeah, I realize I compressed time a little. I've got this movie on my wish list when it drops in price.
You must log in or register to reply here.