Breaking up can be hard to do, especially when your ex comes back from the dead as a zombie. That is the premise of director Joe Dante's latest feature, which he has referred to as a zom-com made for his fans that, unfortunately, never got a wide theatrical release when it was picked up by Image Entertainment and released to theaters and VOD day and date last June (most of the major chains refuse to book such films). The film is out on Blu-ray, but available at Best Buy exclusively until October. 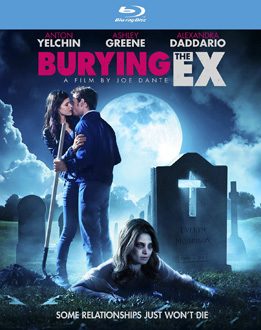 Max (Anton Yelchin) seems to have a good life. He's working at a horror movie memorabilia shop in Hollywood called Bloody Mary's, with hopes to open his own shop one day, and he's got an attractive girlfriend, Evelyn (Ashley Greene) who has just agrees to move in with him, despite the fact that his half brother, Travis (Oliver Cooper), is often sneaking in and using their apartment with one night stands, ashamed that he's living in a converted garage. But things aren't always what they seem. Shortly after Evelyn moves in, she remodels the apartment to make it more eco-friendly while Max is at work, folding his mint-condition foreign movie posters and placing them in a desk drawer, essentially ruining them. She also doesn't support Max's wish to have a store of his own, suggesting he find another line of work altogether. And when she goes ballistic at an ice cream shop called I Scream, run by Olivia (Alexandra Daddario), over the toxins that are likely in the food, Max decides enough is enough and takes Travis' advice to break up with Evelyn by meeting her in a public place to reduce the chance of her causing a scene. Shortly after Evelyn arrives at the dog park, thinking Max is getting her a puppy rather than breaking up with her, she gets hit by a bus and killed. Trying to cheer Max up, Travis suggests he take in the double feature at the New Beverly, something Max used to do before he met Evelyn. At the theatre, he meets up with Olivia, and they hit it off, having lots in common, something he didn't have with Evelyn. Their evening ends with a stroll through the Hollywood Forever cemetery, where Evelyn was buried, and as they walk past her grave, Evelyn pulls herself out, returning to Max's apartment. It seems that in Max's store was a Demon Genie bobblehead, and after a brief tryst, Max and Evelyn proclaimed their love forever, prompting the genie to bring Evelyn back as a zombie. Max has to try and juggle the return of Evelyn while trying to keep her inside the apartment, while at the same time try to continue dating Olivia, who is his better match, until forced to make a final decision.

Burying the Ex is in many ways a return to the type of movies Joe Dante made before Twilight Zone: The Movie and Gremlins, R-rated horror films with a large dose of humor. In fact, this is his first R-rated film since The Howling. While this new film is nowhere near as scary as that film, or even his first film, Piranha, it is his sense of humor and knack for mixing comedy with the horror genre that makes this film worth watching. Evelyn's reappearance is both grotesque and humorous at the same time, employing some great visual gags such as projectile vomiting and her new ability to be extra flexible during her yoga routines. Yelchin is terrific as Max, a movie geek that is afraid to end a relationship out of fear of hurting the other person. Ashley Greene is at her bitchy best as Evelyn, particularly after she gets zombified. And Alexandra Daddario is sweet as Olivia, and shares great chemistry with Yelchin. Fans should keep their eyes out for cameos by Dante regulars Archie Hahn, John Hora, and Dick Miller (yes, he's still alive).

Shot digitally on a minimal budget, Burying the Ex sports a clean and enjoyable 1080p transfer using the AVC codec. Colors are consistent and not overly saturated. Detail is exceptional, particularly in Evelyn's zombie make-up, where you can see subtle skin peeling and flaking. Contrast is also quite good, with deep blacks exhibiting minimal crush.

The DTS-HD Master Audio 5.1 track is mostly front-heavy, which is understandable, considering the small cast and budget. That being said, the track does contain some great uses of sound effects within a spatial environment without drowning out dialogue. The score by Joseph LoDuca benefits from the wider dynamic range and higher fidelity of the track.

With the exception of some trailers at the beginning of the disc, there are no special features whatsoever. Very disappointing.

Burying the Ex may not be one of Joe Dante's best films, but it's good to see him still working and still be in top form, even if it's mostly in low budget independents (his previous film was the 3D family horror movie The Hole), television (he's directed episodes of Hawaii Five-0, Salem, and CSI:NY), and runs and often offers commentary on his Trailers From Hell website. It's a shame there were no bonus features on this disc, but that is becoming more common among smaller film when arriving on Blu-ray.

I agree, it's always great to see what Dante is up to. I'll be picking this one up despite the genre not being one of my faves.

It is always sad to lose someone so talented at such a young age.