Bullet to the Head (1 Viewer)

Bullet to the Head

Sylvester Stallone, as New Orleans hitman Jimmy Bonomo, treads some familiar territory in Walter Hill’s vengeance-fueled potboiler, but if viewers can get past some tired dialogue they should find it entertaining enough. 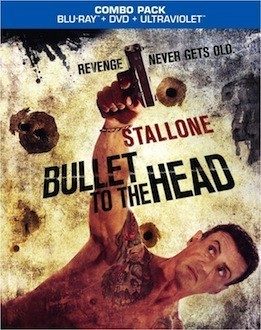 After a routine job, New Orleans hitmen Jimmy “Bobo” Bonomo (Sylvester Stallone) and his partner Louis (Jon Seda) are set up for a hit themselves; though Jimmy manages to avoid getting killed, Louis is not so fortunate. Determined to track down those responsible, the most obvious being the assassin who attacked them (played by Jason Momoa), Jimmy soon crosses paths with visiting D.C. detective Taylor Kwan (Sung Kang), the former partner of Hank Greely (Holt McCallany), the man Jimmy and Louis were hired to kill. Kwan proposes he and Jimmy work together to find the man they’re after, but as the body count rises, he realizes his new partner operates by some radically different rules. Though Jimmy’s violent methods will undoubtedly get them what they need and where they need to go, eventually Kwan will have to hold the veteran hitman accountable for everything he’s done.Director Walter Hill’s hard boiled action film, based on the French graphic novel Du Plomb Dans la Tete, is rife with clichés, but efficient pacing and solid action choreography make it an entertaining way to kill 90 minutes if you're in the mood for that sort of thing. Not surprisingly, the film falters when there's a break in the action, specifically Jimmy’s unnecessary voice over narration and the race-based insults he frequently throws at Kwan (in this day and age, the latter isn’t so much offensive as just tired and obvious). Kang also seems a little out of his element in the role, though to be fair, the character doesn’t have much to do other than be constantly shocked and dismayed at Jimmy’s brutal decision making model. The role of Jimmy's daughter Lisa, played by Sarah Shahi, also never goes beyond a damsel in distress, despite her streetwise, tattooed exterior. While Kwan eventually gets to show some fighting and shooting skills in the final act, the movie’s clearly all about Jimmy and his destructive path of vengeance. Fortunately, the role is filled by a veteran action star who remains a convincing tough guy even at the ripe old age of 65.

Framed at 1.78:1 and presented in 1080p with the AVC codec, the transfer features inky black levels and contrast that accurately displays the full range of values, even in darker nighttime settings. Colors are sufficiently deep in a fairly limited palette, but sometimes the overall image can look a little desaturated or flat. However, the transfer shows no signs of excessive digital manipulation or other undesirable transfer artifacts.

Dialogue in the 5.1 DTS-HD Master Audio track is consistently crisp, clear and intelligible. Support for the score in the surround channels is balanced and seamless, as are the frequent environmental and directional effects. LFE and bass activity are robust and nicely balanced with the other audio elements.

Warner Home Video turns in a fine high definition presentation for a clichéd but entertaining action film starring Sylvester Stallone as a hard boiled New Orleans hitman. With its limited extras, however, the title is one best viewed as a rental or picked up when it hits the bargain bin.

thanks
You must log in or register to reply here.