After a major production delay, Shout! Factory’s Blu-ray collection of Bruce Lee’s Hong Kong films finally arrives on North American store shelves, but was it worth the wait, or has Shout! delivered a swift kick to the aspirations of martial arts fans everywhere? 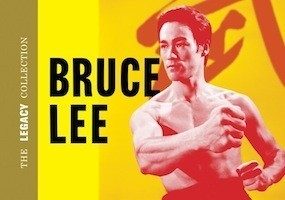 Looking to go beyond his supporting role as The Green Hornet’s Kato, Bruce Lee returned to his childhood home of Hong Kong to finally be cast as a leading man. The runaway success of his first film, The Big Boss, made him a box office sensation in much of Asia, and Fist of Fury and Way of the Dragon quickly followed to try to meet audience demand for more.That unbridled enthusiasm eventually found its way to the United States, where Warner Brothers’ Studio greenlit Enter the Dragon, what would be Lee’s first, legitimate Hollywood feature. Lee’s untimely death just six days before the premiere cut short a career that was only beginning to find its footing with Western audiences, though of course the tragedy propelled Lee’s persona to legendary status, which in turn has kept his films in demand.Assembled in Shout! Factory’s Bruce Lee: The Legacy Collection are the four films originally distributed by Hong Kong movie studio Golden Harvest. The Big Boss and Fist of Fury don’t deviate much from the melodramatic quest for justice / lust for vengeance plots that continue to be martial arts movie tropes. Their cookie cutter stories and leaden pacing are only redeemed by Lee’s high energy fight scenes, which continue to thrill and entertain despite some dated choreography and filming techniques.By comparison, The Way of the Dragon, Lee’s directorial debut, is a breath of fresh air with doses of humor sprinkled among some decidedly superior fight choreography and cinematography. The now epic brawl with Chuck Norris in the Colosseum also doesn’t hurt its cause, becoming a sort of proof-of-concept for Lee’s mythic follow-up, Game of Death. Unfortunately, Lee passed away before completing his archetypal tale of a lone warrior battling his way through seven stages of martial arts hellions, the most famous being basketball star Kareem Abdul-Jabbar. The film that was posthumously completed and released by Golden Harvest in 1978 may bear the same title, but deviates far afield from Lee’s original concept, using but 11 minutes of his original footage and filling in the rest with a hackneyed conspiracy story, obvious body doubles, recycled footage, and, in one instance, a ridiculous cardboard cutout of Lee’s face. Fortunately, a more accurate reflection of his vision is available as a special feature.Still, because Lee’s Golden Harvest films have existed in less than satisfactory forms for almost four decades, it’s a treat to finally have the original versions of the films in high definition (notwithstanding a series of strange production delays). Though the films have far from perfect image quality, at times going from surprisingly good to plain awful, I have no reason to doubt it’s the best technicians had to work with given the age and condition of the movies, which weren’t likely treated with kid gloves in the first place. And in one respect, watching a Bruce Lee film wouldn’t be the same without some kind of grindhouse style artifact.Bruce Lee: The Legacy Collection includes four Blu-rays and seven DVDs with the following contents:

Originally slated for release on August 6, 2013, a “production delay” moved the collection’s release date back a month to September 17th, and then again to October 22nd. The setback stemmed from Shout! Factory apparently receiving the wrong (i.e. old) masters from license holder Fortune Star Entertainment, resulting in the films having a noticeably up-converted quality. That people in the production chain didn’t notice the issue early on is befuddling, but whatever the reason, the problem has been addressed, though, as noted earlier, this doesn’t equate to consistently sparkling images.Each of the films has moments when everything comes together nicely, with inky black levels, richly saturated color, spot-on contrast, and fine detail. But just as quickly, all of that can go out the window, whether from inherent flaws in the camera optics, dodgy production techniques, or poorly maintained source elements. Viewers will notice technical problems ranging from fogging (The Big Boss), problematic color and contrast (Fist of Fury and Game of Death), and excessively low resolution (the first 10 minutes of The Way of The Dragon). Of the four films, I’d say The Big Boss and Game of Death look the best. Fist of Fury is a bit of a disappointment because of its consistently flat looking picture and cyan color cast, while Way of the Dragon’s problems are largely isolated to the opening airport scenes, which get so splotchy and low-res they look like an Impressionist painting (fortunately, the rest of the film never gets that bad). Overall, the good tends to outweigh the bad in all the movies, though viewers should be prepared for some, at times dramatic, inconsistencies.

A variety of audio options are included for each film, but most will prefer the 1.0 Dolby Digital or 2.0 DTS-HD Master Audio tracks. The films’ 5.1 DTS-HD Master Audio options offer seemingly increased clarity and dynamic range, but the surround mixes are ultimately gimmicky and distracting. The English dub tracks on The Big Boss, Fist of Fury, and The Way of the Dragon are entertaining in their way, but ultimately hard to bear over the films’ entirety.With the exception of the last film, the following evaluations are based on the Cantonese mono tracks, based on that dialect being the dominant one spoken in Hong Kong and thus by the majority of the cast (even though all dialogue was looped in post, per production practices at the time). For Game of Death, I opted for the English mono track.Generally speaking, each of the tracks gets the job done with the occasional moment of distortion, strain and/or hiss. LFE is absent, but bass extension and dynamic range are decent given the audio productions’ vintage and budget.The Big Boss: 2.5/5Fist of Fury: 2.5/5Note: Shout! Factory recently announced a trade-in program for theFist of Fury Blu-ray because the Mandarin mono track can’t be selected. Email [email protected] to get a replacement, if desired.The Way of the Dragon: 2.5/5Game of Death: 3/5

Earning high marks for sheer quantity, if not quality, the bonus material includes almost every conceivable kind of extra, short of a set of nunchucks and a yellow track suit.Viewers will ultimately get the most out of the numerous interviews with those who knew Lee himself, like Bob Wall, Gene Lebell, Dan Inosanto, and Lee's childhood friend William Cheung.The number of biographical documentaries included may be a little overwhelming at first, but start with the newest - I Am Bruce Lee, located on Disc 10 - which includes even more from the legend's colleagues and surviving family members.Finally, be sure to check out Game of Death Revisited, a recut of original footage that more closely follows Lee's original vision for the film.Collectible Book and Packaging: Measuring 11.5” x 8” x 1”, the packaging holds all 11 optical discs in top-loading, die-cut cardboard sleeves. A 64-page pictorial section includes a biography, production stills, profiles on each film in the collection, and various bits of trivia. Though the set is handsomely printed and sturdy, the discs are often difficult to remove from their sleeves, requiring a bit of muscle to extract them. However, given the cardboard construction, I imagine things will loosen up over time.Disc 1: The Big Boss (DVD)Disc 2: The Big Boss (Blu-ray)Disc 3: Fist of Fury (DVD)Disc 4: Fist of Fury (Blu-ray)Disc 5: The Way of the Dragon (DVD)Disc 6: The Way of the Dragon (Blu-ray)Disc 7: Game of Death (DVD)Disc 8: Game of Death (Blu-ray)Disc 9: Documentaries (DVD)1970s-era documentaries produced by Hong Kong studios following Lee's untimely death are interesting as time capsules, but aren't particularly definitive in their scope.Disc 10: I Am Bruce Lee (1:34:00) (DVD)Considering the documentary was released on Blu-ray, it would have been nice if Shout! Factory had included it instead of the DVD version. Nevertheless, the film is worthwhile viewing. See my review of the Blu-ray edition.Disc 11: Bonus Features (DVD)

Shout! Factory’s Bruce Lee: The Legacy Collection has been a long time coming, not just in terms of the title finally making it to North American store shelves after a major production delay, but in gathering together Lee’s Golden Harvest films in one definitive, high definition package. For the most part the release fulfills its promise; though it may not have the most consistent image or sound quality, the inconsistency also shouldn’t come as a surprise for anyone who’s familiar with ‘70s-era Hong Kong cinema (and most should be surprised the films look as good as they do). More critically is that the films are presented in their original, unedited forms and with original language options intact. That the set includes a plethora of archival supplements is another boon to the title, though it may ultimately hold less appeal for Lee’s more casual fans.

Thanks for the review. Hard to believe that with all the delays, there's still a disc exchange happening.

I'm not in a rush on this one, but if it hits a good sale I'll grab it to replace my old DVD set.
You must log in or register to reply here.