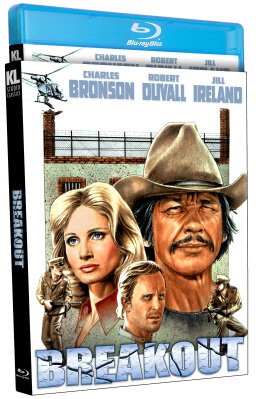 Sentenced to 28 Years for a Crime He Didn’t Commit! Only Two Things Can Set Him Free – Lots of Cash and Bronson! Jay Wagner (Robert Duvall, Tender Mercies) is framed for murder by his scheming grandfather (John Huston, Winter Kills). Unjustly convicted, he faces 28 hard years of confinement in a crowded Mexican prison. Wagner’s wife Ann (Jill Ireland, Violent City) turns to pilot Nick Colton (Charles Bronson, Mr. Majestyk) and his partners Hawk (Randy Quaid, The Long Riders) and Myrna (Sheree North, Charley Varrick) to help Wagner escape. Only the most cunning and daring tactics can spring Wagner, so Colton must plan the impossible. Breakout builds to an explosive climax when Colton launches an all-out desperate helicopter raid that will either rescue the prisoner or cost the lives of all involved. Bronson’s at his wisecracking (and bone-cracking) best in this slam-bang action-thriller directed by Tom Gries (Breakheart Pass) and scored by Jerry Goldsmith (Lonely Are the Brave).