An underdog, coming-of-age saga without a trace of sappiness or sentimentality, Peter Yates’ Breaking Away is a lovely, engaging little film. A first-rate cast coming as close to portraying real-seeming people as it’s possible to get gives the movie its strongest reason to be. Yes, there’s a bicycle race or two to get the adrenalin pumping, but that’s actually the most ordinary thing about the movie. Elsewhere, the amusing, individualistic characters going about their daily lives have plenty of truths to convey and do so in the most ingratiating manner possible. 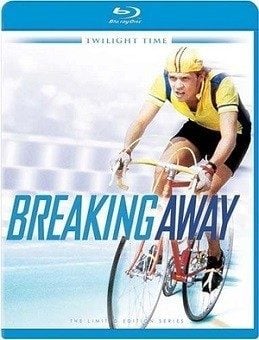 Four young guys one year out of high school are spending their year exploring life’s possibilities in and around Bloomington, Indiana. Dave (Dennis Christopher), Mike (Dennis Quaid), Moocher (Jackie Earle Haley), and Cyril (Daniel Stern) each have his own crosses to bear due to family problems and the real lack of direction in some of their lives. Dave is a champion bicycle racer, and he so worships the Italian racing team who will soon be coming to town to race in the Cinzano 100 race that he’s taken to singing Italian operas, speaking English with an Italian accent, and picking up a few phrases in Italian here and there. But Dave’s father (Paul Dooley) has genuine concerns about his son’s choices and between arguing with him and verbally sparring lovingly with his wife (Barbara Barrie), his life is filled with stress. But Dave and his pals must deal with the college students looking down on their lower middle class existence, so Dave is determined to show them up in the “Little 500,” a two-hundred lap bicycle race which will pit his team against a college frat whose leader (Hart Bochner) has a girl friend (Robyn Douglass) that Dave is attracted to.

Steve Tesich’s Oscar-winning screenplay (which also won prizes from the New York Film Critics, the National Society of Film Critics, and the Writers’ Guild) is awash in purposeful character-building scenes which convey much about each of the film’s main characters. It also allows Paul Dooley’s beleaguered father character to carry most of the comedy burden for the film allowing the drama of the conflict between the rich and the poor (resulting at one point in a fight in the college dining hall that the “Cutters” have temporarily invaded), between Dave and his father who’s convinced his son is a weirdo, between Dave and his buddies when it becomes clear they’re starting to drift apart, and the romantic tension between Dave and Katherine with whom Dave has masqueraded as an Italian exchange student to get her attention to develop interestingly. Peter Yates has staged so many treasurable sequences: Dave riding idyllically through the countryside in the golden afternoon light, Dave training for his marathon races by taking to the highway and getting speeds up to sixty miles per hour, and a heart-rending father and son talk when Dave’s eyes have been opened to the cruel realities of the world (his cherished Italian racers are snobs and cheaters). The climactic race is, as stated before, a rush even with a most predictable conclusion, but the result offers a kind of temporary catharsis for the town where for a few precious moments social class doesn’t matter as much as sportsmanlike competition and honest hard work does. For a brief amount of time, all is right with the world.

It’s a great starring role for Dennis Christopher who gets many spotlight moments and makes the most of them as Dave turns the corner from child to young man right before our eyes. Dennis Quaid also gets one of his best early chances to score as the townie with a definite chip on his shoulder having to accept that his years as BMOC in high school are over. Paul Dooley (who won the National Board of Review Best Supporting Actor prize) and Barbara Barrie (who was Oscar nominated) excel as the concerned parents: he with more exasperation and frustration at his son’s eccentricities and she with more motherly understanding and calm. As Dave’s two other best friends, Jackie Earle Haley has the feisty quality of a bantam rooster when his lack of height is mentioned, and Daniel Stern scores as the more thoughtful and intelligent one of the pack, often working out problems in the group once they’ve surfaced. Hart Bochner makes a fine snobbish villain, and Robyn Douglass who’s introduced in the film does well enough as the girl both he and Dave are in competition for.

The film is presented in its theatrical 1.85:1 aspect ratio in 1080p resolution using the AVC codec. The movie has always appeared rather dreamily soft in many of its scenes (occasionally real sharpness comes to the fore but not often), so the transfer replicates the look of the movie in theaters quite well. Color can be solid and flesh tones are realistic, but black levels aren’t anything to write home about. The transfer is free of age-related artifacts. The film has been divided into 24 chapters.

The DTS-HD Master Audio 1.0 sound mix again replicates the theatrical experience pretty thoroughly. Dialogue is always easily discernible and is never bombarded by the background score of Patrick Williams or the many operatic and classical music excerpts which punctuate the narrative. The mix seems a little light in bass, but that’s likely part of the original sound material. Certainly no hiss or other artifacts are present to mar the listening experience.

Audio Commentary: actor Dennis Christopher joins producer Nick Redman and film historian Julie Kirgo for a very lively and interesting conversation, not just about this film but about other movie experiences in his career.

Dennis Christopher’s Fellini Story (12:53): this audio only excerpt is a follow-up to a comment Christopher made in the commentary about working with Fellini telling an entertaining anecdote about the fluke that was his time on the movie Fellini Roma.

Teaser Trailers (each 0:32, SD): two teaser trailers for the movie, one with the theme of impending adulthood and the other touting its five Oscar nominations.

Six-Page Booklet: contains a series of color stills, original poster art on the back cover, and film historian Julie Kirgo’s lively analysis of the movie.

Winner of Best Picture from the National Society of Film Critics and the Golden Globes, Breaking Away is a special and simple, entertaining motion picture. Capturing a time and place in America about as well as any movie ever has, it’s a singular treat and a pleasure to now have available in high definition. As part of Twilight Time’s limited availability program, only 3,000 copies of Breaking Away are available. Those interested in acquiring the movie on Blu-ray should hop to www.screenarchives.com to see if copies are still available. You can also check availability via Facebook at www.facebook.com/twilighttimemovies.

I'll be watching my BD very soon. I lived in Bloomington, Indiana for a number of years. One of my favorite college towns and I'm seriously considering moving back there after I retire.

A film that I've always loved since its premiere engagement. One of the top films of that year. Read Matt's excellent review and spring for a copy. It's worth the asking price.

We used to watch with incoming freshman each year. A tradition at my dorm...

We'd make fun of the editing mistakes. There are so many, but...great film nonetheless.

(The editing mistakes pertain to "you don't go that way to get there"...)

I've lived in California my whole life and have never been anywhere near Indiana but this has always been one of my favorite movies since I saw it in high school all those years ago. I even loved the TV series. I'm looking forward to the blu-ray arriving in the mail. I haven't seen it in a long time though so I hope it still holds up now that I'm an old guy instead of a young one.

One of my favorite "coming of age" films. Extremely well written.
M

I'm glad that Matt pointed out the great source of humor that Paul Dooley was in playing the main character's father in Breaking Away. I've always remembered Dooley's character as reminding me of the dad of one of my friends, as we came of age on Long Island. That man, who was a school teacher, made comments about life from the same kind of angle as Dooley's character does in the film.


Thanks for the review Matt. Now another film to put on the list that I'd swore was going to get shorter.

I got my copy last week; haven't watched it yet. Back in 1979, this was one of my favorite movies of the year. Somehow, I haven't seen it in 30 years, so I am eager to watch it again.

I know it's been 35 years since I saw this movie in a theater as a kid, but I distinctly remember that our local theater had just transitioned all of their systems to stereo, and this was the first movie that I viewed in the theater that was in stereo as I remember hearing the bike going from right to left and thinking how cool it sounded.


Before then, I'd have to go to the Cinedome in Orange, CA to hear films in stereo or surround.


So the soundtrack being in mono surprises me.

I watched this last weekend and it was delightful. It deserved every accolade it received in 1979 and in the years since.
You must log in or register to reply here.