IntroductionBeing a satisfied Boston Acoustics Receptor Radio owner for many years, its been my trusty alarm clock radio for over a decade, I was intrigued to hear the performance of the Boston Acoustics TVee One Speaker Base. Will it impress me in the ways my little Boston clock radio has? Would it have the same unusually good bass response? Is it a very simple and intuitive design just like my radio? And is it well worth the price of admission and yet beyond your standard run-of-the-mill sound bar? High expectations, and comical since they're based on a clock radio, but lets a take a look and see if Boston can make that $300 a worthy investment and a considerable improvement to your lame TV speakers you're currently enjoying... 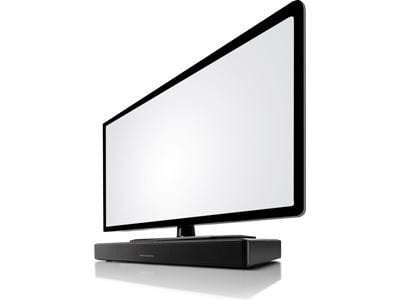 The Good:Installs under your TV!Powerful, clear sound.Volume display is cool.The Bad: Where's the bass?Automatic Power Mode is enabled by default.What's In The BoxIn the box of accessories is a credit-card-style remote with no labels and cryptic symbols on it. Power, mute and volume are clear but the other symbols you'll want to look up in the manual to understand what they do and your options for each of those functions. Basic labels for each button would have been more user friendly but once you've looked them up the functions are pretty straight forward. Range, angle, and even reliability of the included remote was pretty weak. My Home Theater Master universal remote and my cable box remote accepted the IR codes without a problem so I would imagine the weak included remote wont be a big deal for most. Also included in the box is the thinnest optical audio cable I've ever seen. Made of a very rigid jacket material it works but, for the first time ever in my years of using audio cables, I found this cable a pain to use and its rigidity made hiding the cable much more of a chore than it has to be. Its nice that they included a digital cable but its rigidity and permanent circle shape made it a serious pain. Also included is a break-out 3.5 MM headphone to RCA audio patch cable (for two channel inputs) and of course the power cord. The included instruction manual is well written and easy to understand.

FeaturesThere are some unusual design features that I found interesting. The first is Boston's use of the lighted control buttons on the front of the unit. The interesting part of these lighted buttons is that they double as a volume level indicator and show changes in the listening modes. Starting at the low end of the volume the buttons illuminate from left to right as you increase the volume, I thought that was cool. The volume changes were clearly visible from my seated position roughly ten feet from the sound bar, very nice. For changes in listening modes Boston made use of these buttons as well. Now these buttons illuminate to show what type of sound field will be created for a given sound mode. As an example, only the two center buttons illuminate to indicate the unit is in "dialog" mode, the third and sixth button light to indicate "music" mode and the second, third, sixth and seventh buttons light to indicate "music wide" mode. There are eight listening modes in all, all have their own unique layout indicated with these illuminated buttons. After a few seconds, no matter whether you're changing the volume or changing listening modes, all of the buttons extinguish even when the unit is on and functioning.

Features continuedAnother feature of note is "Automatic Power Modes." I suppose this feature would be cool if you wanted your system just as simple as possible but, personally, I find it very annoying. APM allows the sound bar to automatically "wake up" (IE power on) when it receives an audio signal through any of its audio inputs. A nice feature that may come in handy for some people but what I found annoying is Boston elected to leave this feature "On" by default. Since I never power off my cable box, and I suspect most folks don't, that will leave new owners scrambling for their owners manual to figure out how to disable this feature. Not a big deal, its disabled by simply holding the power button for three seconds but thats not really the point, now is it? I would have liked to see Boston allow for manually turning off the sound bar even while this automatic power mode is enabled, or better yet just leave this feature Off by default. Perhaps this default setting is Boston's way of getting new owners to read their owner's manual? If so it worked on me...bravo Boston, bravo.Theres a few additional notable features that I wasn't able to check out. For example the TVee One is not a sound bar but is actually called a "Speaker Base." This distinction means it can support the weight of a 50" flat panel TV (up to 60 pounds) placed directly on top of it. Useful if your TV is stand-mounted and 50" or less. Could also be useful for those with TVs that have a low IR window that might get blocked by a traditional sound bar design. This speaker base also has a night mode that limits the dynamic realism of movie and TV soundtracks, could prove useful for those wishing to watch TV and still remain quiet about it. Finally it has bluetooth. Meaning you can stream media from your bluetooth enabled device. This feature is quickly becoming a standard in sound bar design and Boston made sure it wasn't left behind.PerformancePerformance was a mixed bag, bad news first. I was skeptical of a sound bar design that didn't have a powered woofer and that concern turned out to be very justified. What you end up with is a system with zero visceral impact and an overall anemic presentation. Dont get me wrong I wasn't expecting miracles from a $300 sound system but I'm not sure why Boston elected to forego a powered woofer. With such a limited and economical design I understand that economics come into play when making a sound bar, likely faster than any other consideration, but I still think theres much to be said for the mandatory addition of a powered driver for mid bass even if it increases the MSRP somewhat. Bottom line, if this is the best that can be done while still maintaining your MSRP goal, perhaps you should reconsider if you should even bother to produce such a system in the first place.

But its not all bad. There were some aspects of this speaker base' performance that I liked and one aspect even managed to surprise me. First, the sound was an obvious improvement over my plasma TV speakers. No real surprise there, flat panel TVs are notorious for having very poor sound quality. Heck even an industry leader like Panasonic is guilty of producing TV speakers that can make puncturing your ear drums with an icepick sound far more appealing. So absolutely both dialog clarity and overall tonal separation were vastly improved with this speaker base. For what it does this little speaker base does it very well, I was mildly impressed. However the real surprise came in its output level. For me, one of the hallmarks of a good sound system is in its ability to go loud without actually sounding loud. Frankly, I was amazed that this little Boston TVee One Speaker Base could get so loud, maintain good composure, excellent clarity and never actually sound loud.Final thoughtsIts really hard to recommend Boston Acoustic's TVee One Speaker Base. Trust me, being a Boston fan for many years I really wanted to be impressed and be able to recommend this simple and elegant solution to your TV's terrible sound quality. I listened to several different sources to include blu ray movies, cable TV and Pandora via Bluetooth from my cell phone. Will this speaker base solve your poor TV sound problem and provide a seamless experience via Bluetooth? Yes, yes it will. But you really have to ask yourself what the TVee One brings to the table. What makes it unique? The fact that you can set your TV on top of it is kinda cool, as long as you remember theres a 60 pound limit. Its ability to fill even a large room with sound is definitely an admirable trait for such a modest solution, this thing is powerful for what it is. But when you consider what other manufactures like Sony, Sharp and Vizio are producing in this same price class it should remind you that sound bars are not as bad as they used to be and the competition is fierce. All these competing manufactures give you a dedicated woofer in a 6" 7" or, in the case of Sharp, a dedicated 8" "subwoofer" module to be placed in a optimum bass-producing location. And that, my friend, will make a big difference the next time you spin a movie. Boston Acoustics has done a good job with the TVee One. Its a solid design with a lot of potential to be an excellent solution but a lack of mid bass frequency response leaves me hoping they'll add a powered woofer to the next iteration, the TVee One is worthy of the improvement.