Kelsey Grammer continues showing us the multi-faceted tenets of a ruthless Chicago mayor in the second season of Boss. Not only do we see a hardened politically-savvy veteran who’s capable of just about anything be it callous or underhanded in order to maintain his hold on his political power, but with health issues plaguing him continually, we see him in moments of weakness and helplessness, too. The series itself is less impressive than its star, and it runs off the rails a bit as the season runs, but fans of season one will certainly want to watch the conclusion of the story. The show was not picked up for a third season by Starz. 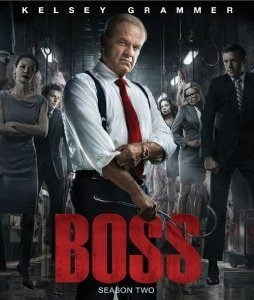 With Mayor Tom Kane (Kelsey Grammer) heading off threats to his power base throughout season one, season two finds him even more ruthlessly vowing to have his own way in running the city of Chicago. Having fired his executive assistant Kitty O’Neill (Kathleen Robertson) and with his chief of staff (Martin Donovan) murdered, both at the end of the first season, the second season begins with his hiring young intern Ian Todd (Jonathan Groff) as his assistant and onetime political enemy Mona Fredericks (Sanaa Lathan) as his chief of staff. Having won the party nomination for governor, Alex Zajac (Jeff Hephner) and his politically savvy wife Maggie (Nicole Forester) are fighting hard for the mayor’s support against a cunning adversary for the governor’s office Catherine Walsh (Amy Morton), made an even deadlier opponent now that former aide Kitty O’Neill is working for Walsh. With Kane butting heads with many in city government including Alderman Ross (James Vincent Meredith) who has his own agenda for taking down Chicago’s “Boss” and furiously attempting to stave off a financial crisis for the city, there is no shortage of political intrigue in these ten episodes. While he fights his enemies on several fronts, the mayor is also dealing with the degenerative brain disease he found out about in season one and which is gripping him more forcefully this season. He’s also coping with his marriage-in-name-only to ex-mayor’s daughter Meredith (Connie Nielsen) and trying to make inroads with his recalcitrant, drug-addicted daughter Emma (Hannah Ware) now out of prison but under house arrest wearing an ankle monitor.The episodes are all near-operatic in style and tone, and the depth of corruption and backdoor deals that must be made to keep lids on the multiple skeletons in closets is numbingly large and figures in almost every episode. Because the series airs on pay cable rather than basic cable or network, there appears to be a desperate urge to be as salacious as possible with flashes of nudity, profanity, and violence. But the sex scenes, almost all of which are telegraphed to a ridiculous degree and drag on to ludicrous lengths often become merely absurd.But there’s no denying that Kelsey Grammer is acting his heart out. The story allows him to be both ruthless and vulnerable, commanding and despicable, often simultaneously. (He isn’t allowed to be funny, however; in fact, the series is uncommonly dour with the producers obviously wanting the viewer to root for Kane despite his cold-blooded core in much the same way that viewers took Tony Soprano’s side despite his callousness.) Connie Nielsen is stately and steely as the first lady of Chicago, a position she covets and will do anything to maintain and negotiates wonderfully some physical acting challenges in most of the season’s episodes. As the mayor’s murdered chief of staff who now returns in an ever-tiresome series of hallucinations, Martin Donovan does well with a poorly realized program caveat. Troy Garity, playing an ambitious crusading journalist who was promoted to editor at the end of last season but who’s still out to get the scoop on the mayor’s corruption at considerable danger to himself doing all his own legwork, impresses. Jeff Hephner hits all the right notes as the charismatic young politician whose ambition is as strong as his sex drive. Jonathan Groff as the young aide with some secrets of his own plays it smoothly and slickly. As the daughter addled by drugs and suspicions, Hannah Ware handles her many emotional scenes well even if she does allow remnants of her British accent to seep into her speech when her emotions reach critical breaking points. Kathleen Robertson as the alluring Kitty wears her sphinx-like mask of inscrutability well.Here are the ten episodes which make up the second season of Boss. They are contained on two Blu-ray discs. The names in parentheses participate in the audio commentary for that episode:1 – Louder Than Words (writer Dee Johnson, executive story editor Angelina Burnett)2 – Through and Through3 – Ablution4 – Redemption5 – Mania (show runner Dee Johnson, Kevin Hynes)6 – Backflash7 – The Conversation8 – Consequence9 – Clinch10 – True Enough (show runner Dee Johnson, producer Julie Hébert)

The episodes are framed at the widescreen television aspect ratio of 1.78:1 and are presented in 1080p using the AVC codec. Sharpness is good throughout the run of the season though contrast occasionally seems a bit milky, and color saturation levels seem to have been lessened a bit giving everyone a ghostly pallor and the series a somewhat lackluster appearance. Black levels are acceptable and sometimes a bit better. Each episode has been divided into 7 chapters.

The DTS-HD Master Audio 7.1 sound mix is certainly ambitious for a pay cable series where most of the action takes place indoors. There is impressive use of directionalized dialogue especially noticeable during Kane's hallucinations, during news conferences, and in closed sessions where voices from around the room speak to the person on camera. Dialogue is always very understandable, important in a series which relies heavily on words. Music has decent spread through the soundstage, and there is some ambience in isolated sound effects that are occasionally placed in the fronts and rears or that pan through the soundstage.

Audio Commentaries: three are available for episodes 1, 5, and 10 (see above list for participants). The first and last are the livelier ones and give the most information. The third commentary also gives some information about potential storylines had the show been renewed for another season.The King and His Court (15:10, HD): Show runner Dee Johnson and all of the primary cast members speak about their roles in the second season of the show.Promo Trailers (HD): for television series distributed by Lionsgate, Mad Men, and Weeds.

The second season of Boss, like the first, has the twists and turns, double dealings, and dirty politics that a political series is expected to have. There is much fine acting on display, but somehow the series never becomes quite as riveting as one would want, and the amount of sexual content distracts from the major political agenda of the show.