Brad here. I actually had most of this review done but was just kinda sitting there until the news of Jerry Lewis passing broke. So I thought I’d better get this done and get it up on the board. So now in honor of the immortal Jerry Lewis (cracking up Jesus and His Angels in Heaven as we speak), my review of a very hilarious Jerry Lewis film.

Note here, as a tip of the hat to the ever-amazing RAH, I put the first part in RAH’s AFWA format. The rest is basically a review of the first part of the movie where the whole scenario is set up with an added twist including a couple of my female FB friends. Most is under spoiler tag so if you want to see this film for yourself, this article won’t spoil it for you (ref: Dictionary of The Most Stupidly Obvious).

Reviewing here the absolutely hilarious (if you’re a straight male but I think my LGBT friends would get a laugh out of this too) “romantic” comedy Boeing Boeing (1965) teaming up iconic actors Tony Curtis (sadly passed away in 2010) and Jerry Lewis (whom we just sadly lost at age 91). This film might put one in the mind of the comic 1940s-1950s Jerrry Lewis/Dean Martin team (and I could actually see Dino & Jerry doing a film like this if there were still acting together at that time). 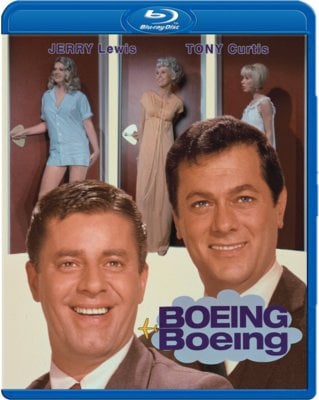 Made in 1965, Boeing Boeing is set in that time frame when jet air travel was still a pretty new thing. In those days a passenger could walk into the airport, purchase or pick up their ticket and proceed right up to the gate and the aircraft boarding ramp without having to pass thru 10 magnetometers, 12 farting police dogs, pass their bags thru x-ray machines inspired by Superman and make their own porno (completge with partial strip tease) in a full body scan machine. There was also a stong belief at this time that the future of air travel was getting ever faster and that we’d all be flying in supersonic (and hypersonic) SST jets by 1980. We all know how that went but this belief is a significant part of this movie’s plot.

Today though I want to review this film with two of my female FB friends, author & writer Erin O’ Brien and my dear cousin Sara Marie. OK they’re not actually watching and reviewing the film with me here, its just me imagining what Erin and Sara would be writing (or doing) were they to watch this film. I’ll also request input from well-known film commentator Julie Kirgo (who might actually have seen this film at one time or another, correct me if I’m wrong Julie) 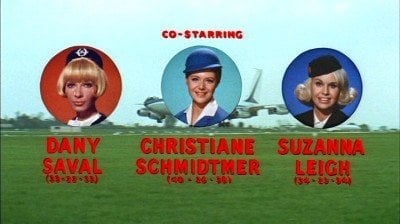 The plot opens where we meet Bernard (Tony Curtis), a lead news journalist who is in charge of his newspaper’s Paris office. As we see Bernard is engaged to a stunner of a girlfriend living in his apartment (heady sexual stuff for 1965), Vicky Hawkins played by statuesque beauty Suzanna Leigh. Bernard employs a housekeeper, Bertha (Thelma Ritter) who as we’ll see should demand much higher wages for the work she does. 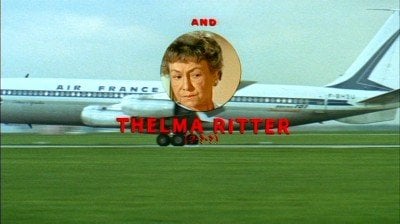 Today his gf is heading off to her job as a British Airways stewardess (1960s term for flight attendant for my younger readers) and Bernard accompanies her to the airport to see her off (and much more as we’ll see). Bernard seems to be in somewhat of a tizzy as he keeps checking his watch and a little too eager to see his “true love” off.

Its around the this time that we’re introduced to Bernard’s friend Robert Reed (played by Jerry Lewis, but one wonders if the Brady Bunch actor Robert Reed got anything for use of his name) who has just come to Paris for an assignment and needs a place to stay as all Paris hotels are booked solid. After a bit of searching and inquiring, he catches up to Bernard just in time to meet Vicky before she has to board her plane. As a side note which enriches the plot a little later, Bernard initially refuses Robert’s request to put him up for a few nights insisting he check into the YMCA (did they have those in Paris back then?). It turns out Bernard and Robert are buddies from a ways back. Not so much like Batman and Robin but more like Popeye & Brutus beating the crap out of each other. 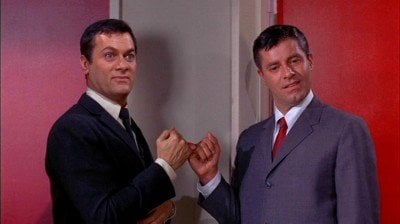 I’ll leave the ultimate resolution under spoiler tag if the reader might prefer to rent this (available on Amazon Instant Video (or Amazon Prime Video).


Skipping ahead a bit, Vicky is off on her flight and right there at the airport, we get introduced to, wait for it, another girlfriend of Bernard’s, Lise , played by voluptuous German beauty Christiane Schmidtmer. At this point, Robert, along with the viewing audience realizes that Bernard is a big-time two-timer (my younger FB friends, ask Uncle Google about that 1960s era phrase). The overall plot begins to come into focus here, Bernard has his girlfriends flight schedules down to a T so that when one leaves, the other arrives. Of course this makes Bernard a Grade-A , first class male chauvinist cad or to borrow the 1960s term, fink (calling anyone a fink back in 1965 was a big time insult). Robert, now in on this, starts his road to first class finkdom by blackmailing Bernard into letting him stay at his apartment (or he’ll tell Vicky about Lise).

(About this time, my friend Erin O’Brien has done a screen capture of the Bernard character, printed it up on her printer and tacked it up on the wall. She then proceeds to throw James Bond style throwing knives at Tony Curtis’s Bernard character picture. Three guesses at where she’s aiming but you’ll probably only need one. My dear Cuz Sara Marie on the other hand has fashioned a rather large voodoo-doll of the Bernard character and is stabbing it repeatedly with those big voodoo needles. You might need two guesses at which two areas of the doll body she’s stabbing into).

Moving right along, Lise now moves into the apartment (knowing nothing about Vicky) while Bertha quickly changes the 8x10 portrait picture on display from Vicky’s picture to Lise’s picture which turns into a regular sight gag as the movie progresses.

Of course as things work out, Robert finds himself alone (except for Bertha) with Lise and a conversation ensues. Lise starts complaining of back problems (eliciting thoughts of those back-problem sex jokes in the audience as Lise sports a 40D bra size). Lise also mentions how she could really use a massage for her back and of course it just so happens that Robert was at one time a physical therapist. We get the eventual massage (off camera) with Lise referring to Robert as “you honest man you”. In my experience if a beautiful European or Russian girl calls you an honest man, count your blessings as your next stop is in her bed or so the movie portends. Note we never actually see any couple in bed with each other this being 1965 and the Production Code was still hanging around.

Later on (after Lise departs on her next flight), Robert is relaxing on the couch taking it easy when in walks, here it comes, a third beautiful stewardess, Jacqueline (played by petit French beauty Dany Saval) who sneaks up on Robert, hugs him from behind and then proceeds to lay one on Robert, thinking its Bernard (revealing Bernard to be a three-timing fink ). Upon realizing her mistake (after Robert states “I don’t believe we met”), Jacqueline immediately jumps away with a “how dare you” exclamation. Robert of course explains to Jacqueline the situation. Jacqueline herself apologizes and asks Robert not to tell Bernard about that big smacker he got. Robert, in true male chauvinist fashion implies that his silence would have a price, another kiss, an expected one. Which after some effort he would eventually get (with Jacqueline in a revealing (for 1965) teddy). Of course at that moment, with impeccable timing, Bernard walks in catching his third girlfriend and Robert in the act. However one problem, Bernard doesn’t have a leg to stand on because Robert now knows Bernard is a three-timing world-class fink.

The development of the main plot line is taking shape as due to the airlines introduction of faster jets, Bernard’s whole three-timing schedule is about to go down the tubes as this means Bernard’s girlfriends will start showing up at the same time. Remember at this point no girl knows about the other although at one point Jacqueline and Vicky encounter each other in the Ladies Room but do not know of each other yet.

From here, Boeing Boeing saunters off into a error-prone comedy of hijinks consisting of dinner dates with Bernard & Robert double dating as each tries to keep his date from running into the other (of course they end up at the same restaurant. There of course is big cab chase thru the streets of Paris and Bernard getting the third degree from the very active Jacqueline as they cab-chase each other thru town.


This movie had me in stitches for most of the time but I was quite disappointed in the climax and resolution toward the end as it leave the viewer wanting more from the end.

Back at Bernard’s apartment, Bernard & Robert meet back up with their respective dates where Jacqueline & Vicky find out about each other. By this time, Vicky has fallen for Robert and announces shes breaking it off with Bernard just about the same time. But of course the first big reveal is unfolding as Vicky realizes that Bernard has been two-timimg her for quite some time. The guys though are shoveling it on big time explaining to the two girls and it looks like they’re going to get away with something. That is until Lise stumbles in after a long nap and then the jig is up.

At this point both guys bail out into the street and dive into a cab just to get away. One thinks now Bernard & Robert are going to go God Squad and get religion about their romantic habits. That is till the actually meet the cab driver who turns out to be a drop-dead gorgeous French lady (one of 3 in the cab company) whereas Robert & Bernard start makin the moves. On that note, the movie ends on a rather disappointing note as we never get to see what happens with the three stewardesses once Bernard & Robert bail out. No cat-fights, no plots of revenge, nothing. Just three very beautiful jilted girls left standing there. And so this movie ends.

(And as our review ends, Erin O’Brien has switched from throwing knives to flaming arrows which of course lights her Bernard “poster” on fire. Sara Marie takes a similar tack in burning her Bernard voodoo doll in effigy).

I have this and a couple other JL movie in my Amazon saved list.

One of these days I'll actually order it.

TonyD said:
I have this and a couple other JL movie in my Amazon saved list.

One of these days I'll actually order it.
Click to expand...

I checked. It's available on Amazon Online though I'd bet the Blu-ray image quality is quite superior.

Went to edit the OP to add Wiki link and too late. Here's the Wiki link to Boeing Boeing (1965).
You must log in or register to reply here.