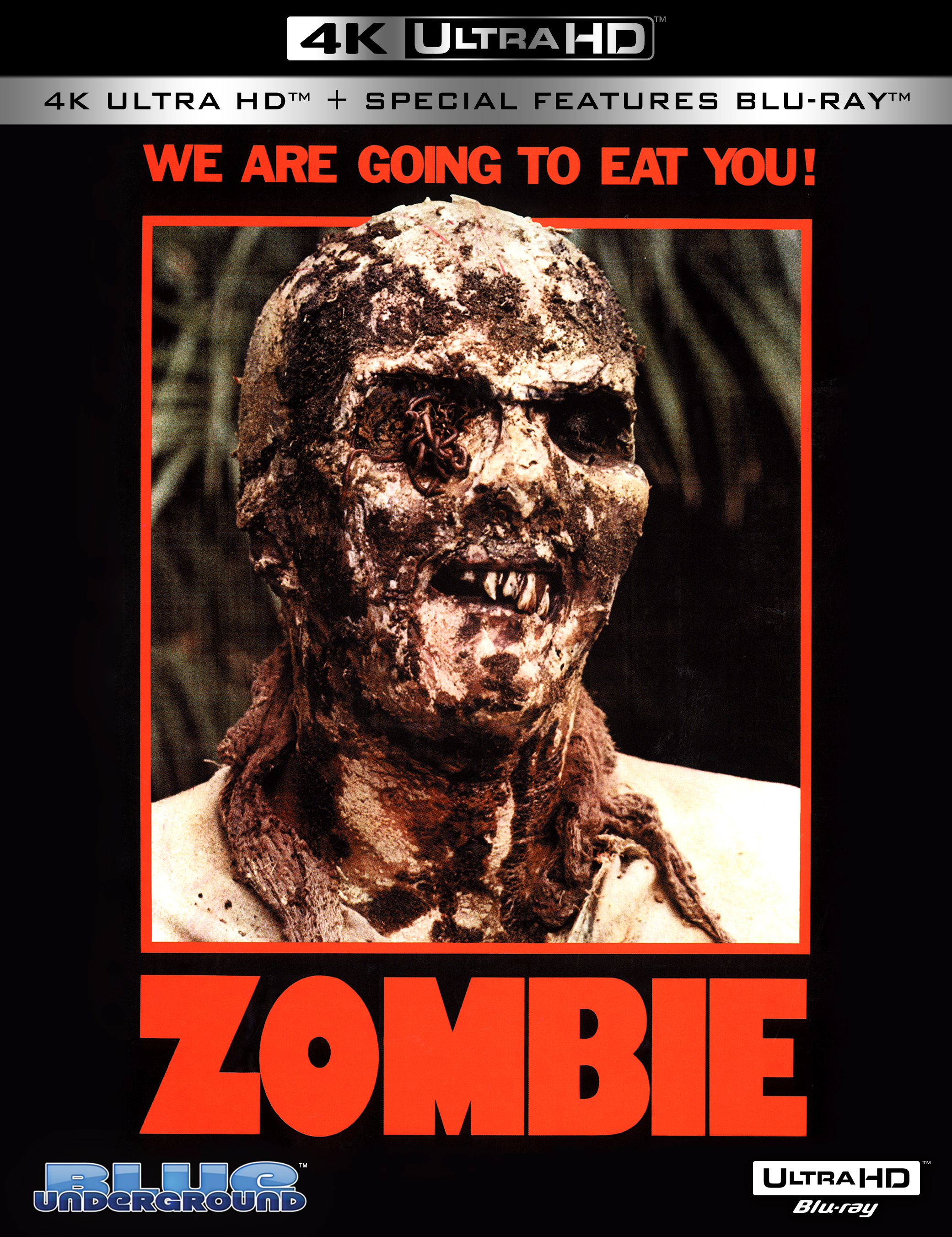 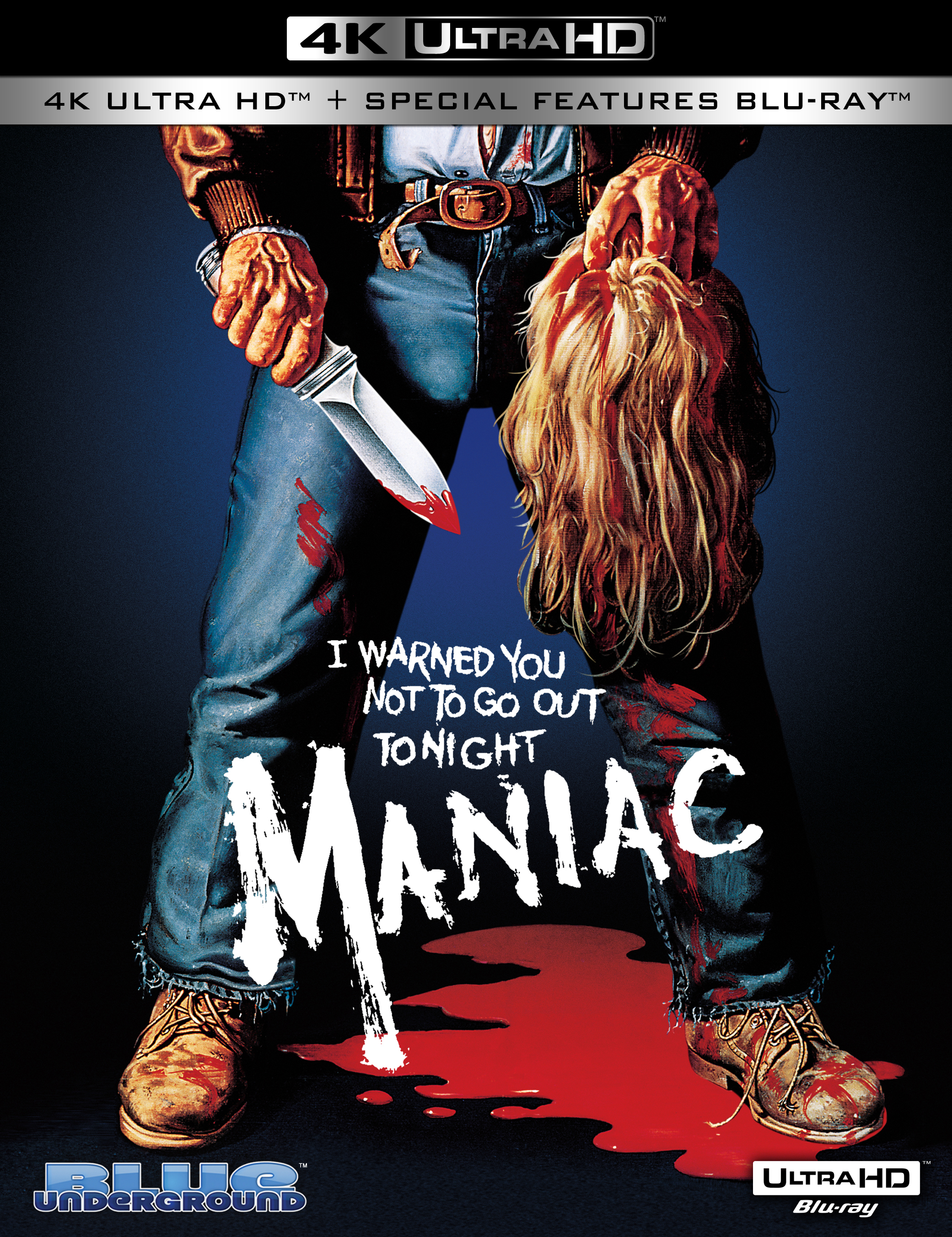 Blue Underground is proud to present critically acclaimed restorations of ZOMBIE and MANIAC in true 4K Ultra High Definition with Dolby Vision HDR and a new Dolby Atmos audio mix, bursting at the seams with hours of new and archival extras.
"We put a lot of time and work into restoring films like MANIAC and ZOMBIE," said William Lustig, President of Blue Underground. " We're thrilled that fans can now view them at home in true 4K Ultra HD, with Dolby Vision High Dynamic Range and new Dolby Atmos audio mixes."
ZOMBIE

The Dead Are Among Us on 4K Ultra HD Blu-ray!

In Italy, it was considered the 'unofficial sequel' to DAWN OF THE DEAD. In England, it was known as ZOMBIE FLESH EATERS and banned as obscene. In America, it was called ZOMBIE and advertised with the depraved tag line "WE ARE GOING TO EAT YOU!" Tisa Farrow (THE GRIM REAPER), Ian McCulloch (CONTAMINATION), Al Cliver (CANNIBALS), and Richard Johnson (THE HAUNTING) star in this worldwide splatter sensation directed by 'Maestro Of Gore' Lucio Fulci (THE HOUSE BY THE CEMETERY, THE NEW YORK RIPPER) that remains one of the most eye-skewering, skin-ripping, gore-gushingly graphic horror hits of all time!

ZOMBIE (3-Disc Limited Edition) Blu-ray Reviews:
* "5 out of 5! The release is sourced from an exclusive new 4K restoration that is simply a thing of beauty. I think that it is the best work that the folks at Blue Underground have done to date... All in all, there is absolutely no doubt in my mind that the folks at Blue Underground have produced the definitive master and release of ZOMBIE. VERY HIGHLY RECOMMENDED!" - Blu-ray.com
* "Blue Underground has delivered the definitive home video release of ZOMBIE... It's difficult to imagine this 4K remaster and three-disc limited edition ever being dethroned... One of the most extraordinary cult cinema packages I've ever come across. I haven't awarded this site's highest rating to a title in more than two years, but Blue Underground's astonishing efforts here are richly deserving. DVD Talk Collector Series" - DVD Talk
* "ZOMBIE is a spaghetti splatter cornerstone that looks better than ever in Blue Underground's new 4K restoration-one of the few absolute 'must-own' releases for horror fans this year!" - Rue Morgue
* "Fulci gets so many elements of this film right - atmosphere, gore, story, decent characterization. This is Criterion-level treatment, and in some ways even more impressive. Undoubtedly, some of the best work Blue Underground has ever done, and if you're familiar with their transfers that's saying a lot. This is a no-brainer pick as one of the year's best home video releases!" - Dread Central
* "Blue Underground's work on this title blew all of my expectations out of the water - the transfer truly is a revelation. After years of seeing this film in substandard quality, it's a shock to see it in such pristine quality - almost as if it was shot yesterday. Add to that a large extras selection and you have one of the finest Blu-ray horror releases of the year. Beyond recommended!" - The Digital Bits

Frank Zito (a career performance by writer/executive producer Joe Spinell of ROCKY and THE GODFATHER fame) is a deeply disturbed man, haunted by the traumas of unspeakable childhood abuse. And when these horrific memories begin to scream inside his mind, Frank prowls the seedy streets of New York City to stalk and slaughter innocent young women. Now Frank has begun a relationship with a beautiful photographer (Caroline Munro of THE SPY WHO LOVED ME), yet his vile compulsions remain. These are the atrocities of a human monster. This is the story of a MANIAC.

Directed by William Lustig (MANIAC COP 2, VIGILANTE) and featuring landmark gore effects by Tom Savini (DAWN OF THE DEAD, FRIDAY THE 13th), this relentlessly shocking and disturbing film was originally banned or censored all over the world due to its graphic violence.

MANIAC (3-Disc Limited Edition) Blu-ray Reviews:
* "5 out of 5! It is sourced from an outstanding 4K remaster that will end up being the final makeover that the film gets on the home video market. The bonus material that was gathered for the release...is beyond overwhelming. Simply put, the folks at Blue Underground went to work to produce the definitive home video release of MANIAC and they delivered it. As far as I am concerned this is the type of top-quality work that deserves a perfect overall score. HIGHLY RECOMMENDED!"- Blu-ray.com
* "5 out of 5! This new 4K restoration of the original true 16MM negatives looks absolutely stellar. The folks at Blue Underground have absolutely done this film justice with this new 'Limited Edition' Blu-ray Disc release. It's sheer perfection in every single area. 5 across the board here for ratings, and that's something very rare for me to be able to justify!" - High Def Disc News
* "MANIAC is a horror classic. Blue Underground has treated it as such. A near flawless transfer, thoughtful audio commentaries, and a wealth of extras. As a result, MANIAC is a 'Top 10 Blu-Rays of the Year' level release. HIGHEST POSSIBLE RECOMMENDATION!!!" - The Movie Isle
* "10 out of 10! Blue Underground are heads and shoulders the fan's company as they are bringing us all these amazing films from our youth in stunning high definition and amazing quality with a lot of great special features. MANIAC on Blu-ray is a must buy!" - Wicked Channel
* "Almost forty years later, MANIAC has lost none of its power to shock... Blue Underground's Blu-ray reissue is a thing of morbid beauty, presenting the picture in a gorgeous new transfer, with really strong audio and with a couple of important new extras and all of the archival material from past editions as well. Highly recommended" - Rock! Shock! Pop!
* "MANIAC is just not a film you can ignore . . . especially in its final moments. Blue Underground presents the 4K restoration of MANIAC on Blu-ray with stunning results. With an upgrade in sound and in vision, this low budget shocker, originally filmed on 16mm, looks almost new again!" - Reel Reviews