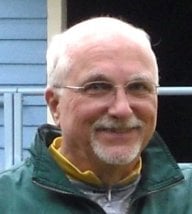 Maybe someone can give me some advice. I have an older Toshiba RPTV with the usual Fresnel / lenticular combo screen. The screen has developed blotchiness which can be annoying during screening of anything. I took the screen off the set and opened the sandwiched Fresnel and lenticular sheets to see what I could see. The Fresnel lens appears to be the source of the problem. At first I thought it might be mildew but a closer look at the Fresnel doesn't quite look like that. I tried wiping the fresnel ridges with a soft damp cloth and the blotches do not diminish. Any clues as to how I can resolve this without replacing the Fresnel lens?

It's been several years since I posted that. I got rid of the RPTV a couple of years ago but not until I replaced the Fresnel element. It was etched somehow and that caused the blotchiness. I suspect it was mildew from the basement room I had the home theater gear in. Replacing the Fresnel fixed the problem. I then bought a front projection HD Yamaha unit and gave the RPTV away to a friend who still uses it. It's now 12 years old and still working as well as can be expected for something of that design.
You must log in or register to reply here.
Share:
Facebook Twitter Reddit Pinterest Tumblr WhatsApp Email Link