At the time of its theatrical release, director Michael Mann’s Blackhat was a timely film, dealing with cyber terrorism, after the cyber attacks on Sony Pictures and the exposed vulnerability of Iran’s nuclear power plants (which actually inspired this film). Blackhat could have been an exciting and thought provoking crime drama, but unfortunately the end result was a dull and lifeless plotline highlighted by beautiful nighttime cinematography (one of Mann’s trademarks). 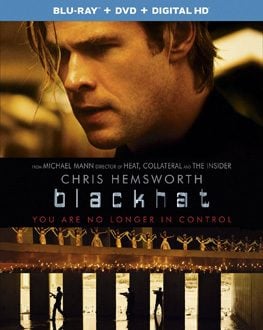 In China, a reactor at a nuclear power plant goes critical after being hacked by a Remote Access Tool (RAT) that causes the water pumps to fail. A few days later, in the US, soy futures are manipulated using the same software tool. Chen Dawai (Leehom Wang) of China’s cyber warfare unit and Agend Carol Barett (Viola Davis) of the FBI join forces to investigate and track down the hacker, enlisting the aid of one of the RAT’s authors, Nicholas Hathaway (Chris Hemsworth), currently serving a prison sentence for cyber crimes. Hathaway agrees to cooperate in exchange for furlough and a reduced sentence if the perpetrator is captured and convicted. Dawai hires his sister, Chen Lien (Tang Wei), a networking engineer, to assist them. The trail leads them to Los Angeles, where the find the suspect who uploaded the code to the commodity exchange murdered. This then leads them to Hong Kong, and to a paramilitary team led by Kassar (Ritchie Coster), ending in a shootout in Hong Kong’s sewer systems, with Kassar getting away after taking out the surveillance team. After retrieving the heavily damaged and fragmented hard drives from the downed nuclear power plant, Hathaway hacks into the NSA’s servers so that their Black Widow program can rebuild the missing data. This leads them to Malaysia, but not before a shootout and foot chase in the streets of Hong Kong. This all leads to a final confrontation in Indonesia, where Hathaway uncovers who the blackhat hacker is and what his motive is.

Blackhat had the potential of being a very interesting and exciting film on cyber terrorism. Michael Mann is no stranger to crime drama, with such “classics” on his resume as Thief, Manhunter, Heat, Collateral, and best known as the Executive Producer of the 1980s television series Miami Vice and Crime Story. His visual style is most definitely on display here, including his trademark nighttime urban landscapes as backdrops for chases and shootouts. What is lacking is an interesting storyline and set of characters. The computer jargon spewed by Hemsworth, Wei, Wang, and Davis comes off as unconvincing, faulted more for their delivery than the actual terms used. When we finally meet the antagonist of the piece and discover his motive (which does not happen until we are well into the third act), we could really care less about what he’s doing and why. Much of the fault lies in the screenplay by Morgan Davis Foehl, which spends too much time placing the characters in front of a keyboard and typing code and text messages. I hate to say this, but an episode of the CBS series CSI:Cyber comes off more interesting than Blackhat.

Captured digitally using the Arri Alexa XT M, Canon EOS 7D and 5D, and even a GoPro Hero 3, the 1080p HD image is exceptional, compressed using the AVC codec and retaining the film’s theatrical aspect ratio of 2.40:1. As one would expect from a film by Michael Mann, colors are vibrant, particularly during the darker nighttime sequences. Detail is exquisite, showing off the textures of the fabrics as well as strands of hair and stubble on the actors. Contrast is also excellent, with very few instances of crushed blacks or banding issues.

The DTS-HD Master Audio 5.1 track has some great moments, and others where you find yourself scratching your head wondering if something went wrong with your receiver’s settings. The action sequences obviously sound the best, with a wide soundstage that fills the room and explosions and gunshots giving your subwoofer a nice workout. Dialogue, however, is an issue from time to time with this track. There are times where is is clear and concise, perfectly understandable, and yet there are other times where dialogue is so low or almost mumbled that I found I had to use the uHear option on the disc to figure out what the characters were saying to each other.

The Cyber Threat (1080p; 13:02): The cast and crew discuss how real cyber terrorism is and how they depict it in the movie, with help from some of the technical advisors on the film..

On Location Around the World (1080p; 9:30): Mann, along with members of the cast and crew, discuss the importance of shooting in real locations over shooting on a set inside a soundstage.

Creating Reality (1080p; 17:01): The cast and crew discuss the research that went into creating the characters in the film.

DVD Copy: The movie in 480p, trailers for Seventh Son, The Boy Next Door, The Loft, Black Sea, The Man With the Iron Fists 2, and the Creating Reality documentary.

Digital HD Copy: An insert contains a code to redeem a digital copy of the R-rated version through both Ultraviolet partners and iTunes. The code is subject to expiration, but no expiration date was provided.

Blackhat is Michael Mann’s second movie in a row that failed to connect with audiences (Public Enemies from 2009 was his last theatrical directorial effort), and that’s a shame, since Mann knows how to make a good movie. Worth at the very least a rental.

Unfortunately, I have to agree with this take on the film, a clear example of style over substance. If the cast were any more laid back, they'd fall over. Major disappointment from usually proficient Mann.

So apparently Michael Mann has created a radical new cut of this film...not minor changes but a total reworking of the picture. It seems it was shown on the F/X channel and that is the only place it has been seen so far. I am wondering if this new version will get a blu-ray release.
You must log in or register to reply here.