Jude Law stars as an unemployed submariner at the end of his ropes, who leads a group of fellow out of work navy men on a quest for gold believed to be aboard a sunken U-boat. Part Das Boot and part Treasure of the Sierra Madre, Black Sea is an engaging thriller from director Kevin Macdonald (The Last King of Scotland). 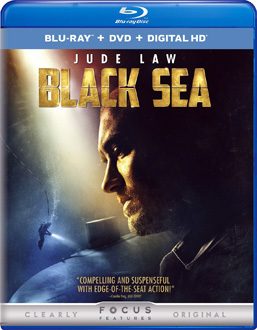 Robinson (Jude Law) has just been laid off by his long-time employer, a naval salvage company. Over drinks with his former co-workers at the local pub, Kurston (Daniel Ryan) tells the group that their former employer discovered an old U-boat from World War II off the coast of Georgia, rumored to be full of gold that Nazi Germany borrowed from the Soviets. Kurston sets up a meeting between Robinson and a potential Russian investor, mediated by an American, Daniels (Scoot McNairy), who agrees to put up the necessary capital to purchase an old Russian submarine in exchange for a majority stake in what is found aboard the sunken ship. Robinson quickly hires a crew, half Scottish and half Russian, setting off on an underwater adventure to find the treasure. But Robinson makes a fatal mistake, offering the crew an equal share of the loot, and as complications arise, tensions also mount between the crew members, leading to murders and double crosses. Will the crew make it to safety, and if so, which ones? And will they get away with the treasure?

Black Sea is by no means a perfect film, but it is an entertaining one, despite some rather convenient plot devices (particularly a major double cross that comes just before the third act). Writer Dennis Kelly’s set up of how the gold made its way on to the sunken U-boat is a convincing one, even if it is pure fiction backed by historical events. Director Kevin Macdonald and Cinematographer Christopher Ross make good use of the cramped and claustrophobic setting of a submarine to convey the tensions running on board, and the convincing cast helps tremendously, especially Jude Law who is cast against type as the submarine captain, Bobby Schofield as Tobin, the 18 year old soon to be father whom Robinson hires as a last minute replacement for Kurston, and Konstantin Khabensky as Blackie, the leader of the Russian team. Black Sea never quite reaches the level of Hunt for Red October, Das Boot, or Treasure of the Sierra Madre, even though it shares many of the same qualities of those films, but comes very close.

Captured digitally on the Arri Alexa XT, it should come as no surprise that Black Sea arrives on Blu-ray in a near-reference quality 1080p HD presentation. Preserving the film’s intended theatrical aspect ratio of 2.40:1, the AVC-encoded transfer has consistent colors without appearing over saturated, detail is excellent (revealing creases and beard stubble in the faces of the naval workers), and blacks are deep and inky with very minimal banding in a few rare instances.

The DTS-HD Master Audio 5.1 track is a stunner, providing the listener with discrete surround effects as subtle as creaks in the submarine as it navigates through the water to extremes such as explosions and whirring machinery, while keeping dialogue and music well-balanced and never overpowering. Some, however, may have difficulty with the thick Scottish and Russian accents, but using the uHear function that Universal includes on most of their Blu-ray releases will help to alleviate that. When you find a section that is difficult to understand, simply hit the yellow button on your Blu-ray remote, the film will back up 15 seconds and turn on the subtitles momentarily.

Audio Commentary with Director Kevin Mcdonald: Be patient with this track, as Mcdonald does not begin his narrative until the opening credit sequence has completed. This is an interesting track, as Mcdonald discusses the casting process, his inspiration for developing and making the film, and cluing the viewer in as to which shots are on the actual submarine and which are on a set at Pinewood Studios.

DVD Copy: The movie in 480p, trailers for Maps to the Stars, Bates Motel, The Man with the Iron Fists 2, and the same set of Special Features as on the Blu-ray version.

Black Sea is a dark, entertaining thriller that comes very close to being placed on the same level as Hunt for Red October, Das Boot, and Treasure of the Sierra Madre, but its plot contrivances, unfortunately, get in the way of it reaching those heights. Jude Law’s performance is the real standout, and the presentation on the disc is outstanding.

Thanks for the review, Todd. I'm a sucker for submarine movies, so I'll certainly check this one out!

I saw this the other night and was impressed. Audio and video were very good and the story was non stop edge of your pants.

Like Neil, I'm also a sucker for sub movies, so I was pre-disposed to at least like this picture. But surprisingly, I thought it held together rather well, and gave over to its contrivances without much resistance.


Also an interesting against-the-grain role for Mr. Law - exactly the kind of off-kilter character detailing something like this needed. Combine that with its brisk pace, some snappy underwater FX, plus well-imaged sound, and I was totally engaged by this oddly noirish underwater caper.


Overall good movie and a very good disc. I'm glad HTF didn't allow it to slip through the cracks without notice.

I'm glad to see that others liked this movie. I saw it in the theaters and thought it was a much better thriller than the reviews seemed to think.

Most reviews were favourable Travis, at least among those I read. What seemed to be missing was a little good old fashioned promotion. Heck, I don't even recall Black Sea playing locally, although a handful of screens must have run it for at least a week. Looks like it just fell through the cracks theatrically.


And yet here it is hitting home video and still little buzz, just quietly sneaking into release without much fanfare. Drives me crazy when solid, well made movies meet this sorry fate.