Academy Award winners Kevin Costner and Octavia Spencer fight over the guardianship of a grandchild while traversing the murky waters of interracial mistrust in Mike Binder's Black or White. There are lots of different dynamics going on in this involving story of two families struggling with loss and addiction, and the acting is first-rate across the board, but when all is said and done, the movie proves to be much ado about nothing, and it takes two hours to get to that realization. 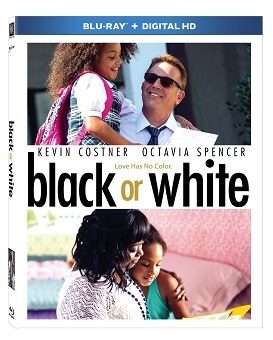 keep case with a slipcover

Upon the death of his wife in a car accident, attorney Elliott Anderson (Kevin Costner) is tottering on the brink of alcoholism having already lost his daughter during childbirth and now left with her mixed race eight-year old child Eloise (Jillian Estell) to raise on his own. The child’s paternal grandmother Rowena Jeffers (Octavia Spencer) is already raising a passel of her kinfolk and is eager to take in her granddaughter whom she doesn’t get to see enough even though Eloise's father, her drug-addicted son Reggie (André Holland), really isn’t interested in being a parent. When Rowena goes to family court to sue for sole custody of her granddaughter, she knows she needs her son to appear and give his blessing to the change or else family court won’t even consider her application.

Writer-director Mike Binder fills out his two hours of screen time with multiple confrontations between all of the principals involved in this custody case. They can be funny or dramatic, ironic or heartfelt, but it really boils down to basics: It really isn’t about their differing races as much as it is the suitability of one side or the other to care for the little girl, and there are certainly red flags on both sides (alcoholism on one side; drug addiction and fewer means on the other: it’s never a question of love or a problem with race though initially that is one of the facets of Rowena’s case) which might prevent the judge awarding custody to one side or the other. So when the final courtroom speeches are made and the decision is rendered, one wonders why this entire affair couldn’t have transpired over a calm and considered ten minute discussion in a closed room instead of dragging things out for months the way they are in the film. Yes, all these grand dramatic gestures allow the stars to strut their stuff: Coster stumbling through alcoholic hazes and making ridiculous decisions we can see are going to backfire on him the moment they occur, Spencer sassing everyone in the film from her younger brother (Anthony Mackie) acting as her counsel to her drug-addled son and even the family court judge (who takes no guff from her and stares her down in one of the movie’s most memorable moments). Binder’s direction is standard fare: meat and potatoes helming without any particular bells and whistles though every scene runs smoothly and a climactic encounter at the pool between Elliott and Reggie does ratchet up the anxiety levels quite a bit.

Kevin Costner has the functional alcoholic act down to a science, and he’s very believable in both his earnest efforts to cope with the chaos swirling about him and his genuine love for his granddaughter. Octavia Spencer perhaps pops her eyes and spits out her speeches a bit too stereotypically for much of the movie, but there is intense feeling there, and she’s certainly entertaining. As the little girl in question, Jillian Estell is a treasure: sweet and open for much of the movie but certainly as willful as any eight-year old can be on occasion: a very believable performance. Anthony Mackie is outstanding as the dedicated lawyer fighting for his sister’s point of view even though he’s at odds with her at certain crucial moments. André Holland likewise offers a realistic performance as a junkie simply not ready yet to be a father despite his mother’s earnest efforts to gain his trust and cooperation. Mpho Koaho adds a terrific amount of entertainment as an over-achieving African exchange student who tutors Eloise and Elliott in math and in common sense. Paula Newsome is quite good as the firm judge in complete control of her courtroom while Jennifer Ehle has a series of wordless cameos as Elliott remembers his deceased wife.

The film’s theatrical aspect ratio of 2.40:1 is faithfully rendered in a 1080p transfer using the AVC codec. Sharpness is superb throughout offering details in facial features and hair that really stand out. Color is solidly controlled also with realistic skin tones. Contrast has been consistently applied while black levels are rich and deep. This is a reference quality transfer. The movie has been divided into 24 chapters.

The DTS-HD Master Audio 5.1 sound mix doesn’t really use the entirety of the surround soundfield for anything but Terence Blanchard’s background music score which gets a good spread through the fronts and rears. The remainder of the film is more directed to the front soundstage with dialogue well recorded and delivered to the center channel and sound effects offering only a basic ambience of the city and neighborhoods of Los Angeles (the filming was done in New Orleans).

Kevin Costner Featurette (2:02, HD): the star discusses his character, and the actor’s work ethic is praised by his co-stars Octavia Spencer and Anthony Mackie.

Promo Trailers (HD): Far from the Madding Crowd, Beyond the Lights, Cake, among others.

A family drama that features expert acting and a decent story with equal parts humor and seriousness, Black or White is certainly worth a rental for fans of the stars or those interested in the subject matter of child custody where no suitable parent is present. The Blu-ray offers exceptional picture quality that really aids in involving the viewer in the story despite its eventual triteness and somewhat underwhelming conclusion.