Penny Marshall’s Big is a charmer from beginning to end. An amiable comic fantasy that never puts a wrong foot forward, Big is a tonic for what ails you. It established its lead as the next film superstar, and it brought forth new enthusiasm for Penny Marshall’s directorial talent as well. Now more than two decades since its original burst of box-office glory, Big continues to impress. It has not outgrown its own precious premise. The new 25th Anniversary Edition, however, does not present a new transfer. The packaging is updated, and there is a new insert, but the Blu-ray release of the theatrical and extended cuts remains the same. 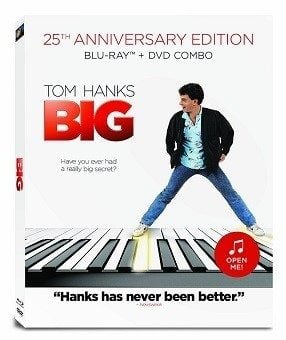 keep case with slipcover which opens

Josh Baskin (David Moscow) is feeling the glimmers of adolescence coming upon him: sure, toys are still fun, but girls are beginning to take on a new appeal that he’s eager to explore. Only, he’s still not quite big enough to play seriously with them, so one night at a local carnival, he wishes on a Zoltar fortune-telling arcade machine that he could be big. The next morning, Josh (now Tom Hanks) awakens to find that his wish has come true. Thrown out of the house by his mother (Mercedes Ruehl) who’s convinced he’s a kidnapper, Josh and best friend Billy (Jared Rushton) make their way to New York City where they hope to locate the magic machine to get Josh back to normal. Until they can locate it, Josh takes a job at the MacMillan Toy Company, and his childlike glee with all things toy rapidly promotes him through the company where the boss (Robert Loggia) admires him and co-workers Susan (Elizabeth Perkins) and Paul (John Heard) alternately like and loathe him.The inventive script by Gary Ross and Anne Spielberg finds all manner of comic situations where Hanks as the man-child can pass as an adult while finding the joy in things that only a kid can seem to ferret out. The scene at F.A.O. Schwartz playing on the floor keyboard with his boss is perhaps the film’s most memorable and readily identifiable sequence (it is indeed magical), but no less fun are a cocktail party as Hanks’ Josh tries an assortment of buffet finger foods or a sleepover at his apartment with Susan where he introduces her to the joys of the trampoline. Marshall shoots part of this lyrical moment from outside looking into the apartment windows, but even at a distance, the elation they’re experiencing is palpable. In fact. Marshall’s delicate handling of the comic and dramatic elements of the script is quite masterful. Even the handling of the sexual attraction Josh experiences, which could have been an embarrassingly icky sequence for the audience, is handled with gentility and a quiet command making the next-day reaction all the more deliriously satisfying.Tom Hanks had made some successful comedies prior to Big. Both Splash and Bachelor Party had done well, but neither exploited any hidden depths in him as an actor. In this film, he makes Josh’s unbelievable transformation from child to adult something that is never questioned clearly earning the Oscar nomination he received for his inventive and charming performance (he also won the Los Angeles Film Critics prize and the Golden Globe). Elizabeth Perkins makes her own transformation during the film from a rather cold-hearted businesswoman to a genuinely caring, sensitive person. Robert Loggia casts away the heavy dramatics for a freer, easier persona as the founder of the toy company. John Heard plays the marginal villain with the right degree of jealousy and crassness while young Jared Rushton as Josh’s best friend Billy plays remarkably well opposite Hanks.

The film’s 1.85:1 theatrical aspect ratio is faithfully rendered here in a 1080p transfer using the AVC codec. Sharpness is above average with the transfer (better in close-ups than in medium or long shots) though contrast sometimes seems a bit wanting leaving occasionally an image that lacks depth and finer detail. Color is acceptable while flesh tones are just a bit pink. But the film’s age is never betrayed by artifacts in the transfer offered here. The film has been divided into 24 chapters for the theatrical version and 32 chapters for the extended cut.

The DTS-HD Master Audio 5.1 sound mix finds a few instances to activate the entire surround soundfield. Both trips to a carnival come alive with all manner of channel specific ambient sounds and a reawakening of the subwoofer for a few low bass rumbles. Elsewhere, Howard Shore’s music score becomes the main occupant of the surround channels with dialog firmly anchored in the center channel. There is also a Dolby Digital 2.0 stereo sound mix available.

The disc offers the viewer the option of playing the theatrical cut or the extended version of the movie.Audio Commentary: writers Gary Ross and Anne Spielberg not only voice their own comments but also finds the duo playing the audio tapes Spielberg used in brainstorming sessions with her writing partner so the viewer can hear ideas that both made it into the movie and some that didn’t. It’s a fascinating peek into the process that these writers employed to fashion this script.Deleted Scenes (13:35, SD): eight scenes which can also be played individually. The user can also choose to have some (but not all) of the clips introduced by director Penny Marshall.Big Beginnings (16:29, SD): features writers Gary Ross and Anne Spielberg discussing their tape recorded brainstorming method of writing. Later in the featurette they’re joined by producer James L. Brooks who also comments on the script and the pressure they were under to get the movie out with three other movies being filmed simultaneously with the same basic theme.Chemistry of a Classic (23:47, SD): finds the film’s director, producer, casting director, and co-stars Robert Loggia, Elizabeth Perkins, David Moscow, and Jared Rushton looking back on their experiences of making the film.The World of Play (9:54, SD): an interview with executives from various toy companies talking about their methodology of getting toys on shelves from the idea stage to the conceptual art and modeling, the testing with children, and the final production.AMC Backstory: Big (21:16, SD): another in the series of very good documentaries produced for American Movie Classics on worthy Fox films featuring the stars (including Tom Hanks who doesn’t show up in many of the disc’s other featurettes), the writers, and director talking about the movie’s production process and reception.Carnival Party Newswrap (1:33, SD): clips of a launch party held on the Twentieth Century-Fox backlot after the film’s very successful premiere.Theatrical Trailers (1:16, 2:25, SD) and TV spots (0:32 for each, SD)DVD Copy: enclosed in the casePackaging: a slipcover which opens and plays “Heart and Soul” from the movie and three “Zoltar Speaks” prophecy cards included inside the case.

Big is a wonderful adult fantasy that captivates no matter how many times one has experienced it. An above average audio and video presentation on Blu-ray along with supplements ported over from previous releases makes this a fine package for fans of the movie. This release, however, does not feature a new transfer of the film. For those who haven't already added the Blu-ray to their collections, the price is right, and this release is definitely recommended.

My New Year's resolution (effective 12/1/2013): To only purchase Blu-rays with PQ ratings of 4.0 or better. Gotta cut back on marginal upgrades.

Is there any difference between the extras on this blu and the one already out? .Thanks

Tino said:
Is there any difference between the extras on this blu and the one already out? .Thanks
Click to expand...

No, apart from the packaging and the one inclusion inside the case.
You must log in or register to reply here.