I have had a BenQ W1070 projector since early 2015 and have noticed an issue during 3D BluRay playback. 2D playback is not affected. I cannot be sure whether this is something that has only relatively recently started happening or whether it's always been there and now I've seen it I can’t unsee it.

It's difficult to describe but essentially what I am seeing is like a band, or strip, at the top of the image, which is very slightly darker than the rest of the image. It is almost as if the top portion of the image is at a slightly different brightness setting, but not otherwise distorted. It is only visible in certain scenes and how noticeable it is depends on the scene. If there are thick black bars above and below the image due to the aspect ratio, so covering the area that would otherwise be affected, the issue does not arise (or is at least not visible).

I have tried to take a photo of what I am seeing: 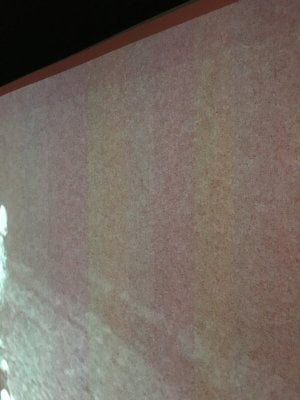 The block of black right at the top is the projector screen itself, then below that there is the black bar within the image (due to the aspect ratio), and then below that is the strip I am referring to. You can see it's quite faint but noticeable (this is about as noticeable as it ever gets; in many scenes it's not present at all). You can also see vertical bands in the image but that's just the way the photo has come out; you can't see those in real life.

I've recently started watching a lot of 3D content and would like to get the issue resolved. I just don't have a clue what could be causing it. It's not a player issue (I have tried my PS3, PS4, Panasonic BluRay player and the issue occurs in each case). Might it be an HDMI cable issue? I don't currently have a spare HDMI that is long enough for me to test this, but I had thought that an HDMI cable either worked or it didn't, so a faulty cable wouldn't be the likely cause. It's not an issue with the 3D glasses because you can see it without the glasses as well (and it wouldn't have come out in the photo).

Any thoughts gratefully received!
You must log in or register to reply here.

After image (?) issue with Samsung qled

How Viewing Environment Conditions Can Corrupt Or Enhance Your Calibration- Updated